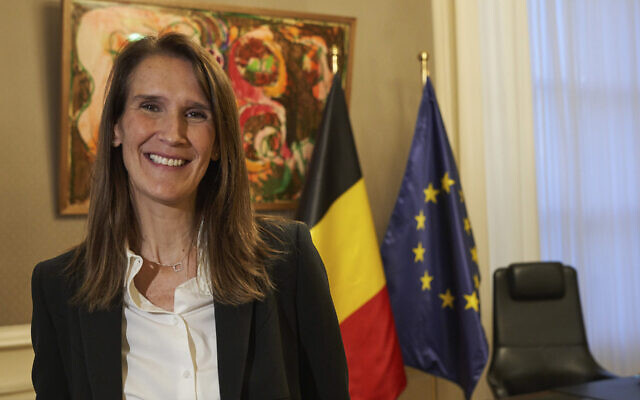 Sophie Wilmès, the new Prime Minister of Belgium — can she meet the challenges of its institutions, its political culture, and populism? (Vincent Duterne/Getty)

The fourth article for the Populism in Action Project, soon to be formally launched on EA WorldView:

Belgium’s first female Prime Minister was appointed after her predecessor Charles Michel took up the Presidency of the European Council. She faces a difficult situation, with her party Mouvement Reformateur (MR) losing ground in May’s elections and giving her little political leverage.

The ongoing lack of a government has left Belgium’s growing budget deficit in limbo, drawing admonishment from international institutions. Wilmès soon lamented the lack of urgency in negotiations between the two parties most likely to establish a coalition administration, the Flemish Nieuw-Vlaamse Alliantie (N-VA) and the Francophone Parti Socialiste (PS).

The stalled process to form a Belgian government often feel like “another crisis, and another compromise“. In 2011, Belgium famously (or infamously) broke the record for the longest time spent without a government: 541 days. It is now been more than 150 days since Belgium’s May 2019 elections, with another vacuum amid longer and longer negotiation times for government formation.

But this is not just a Belgian story. It is a demonstration of politics across Europe.

The biggest story of Belgium’s 2019 elections was the unprecedented success of the radical right populist party, the Vlaams Belang (Flemish Interest, VB). The party took second place in vote share across Belgium, behind only fellow Flemish nationalist and right wing party N-VA.

The outcome was a personal victory for VB leader Tom Van Grieken, 33, elected in 2014 as the youngest-ever head of a Belgian party. In his first federal elections, he was the fourth most-popular politician, “moderating VB’s line and presenting a more outward-facing agenda than the party has previously.

The strategy is not only one of moderation, but of modernization. VB did well with young male voters and spent more than any other Belgian party on Facebook advertising. In a press conference after the ballot, van Grieken declared a ‘new Vlaams Belang that doesn’t shut its doors to the press, but that has an open mind.”

In previous coalition negotiations, VB has struggled against its reputation and the tradition of a cordon sanitaire, a pact made by other Flemish parties to exclude any possibility of coalescence with the Vlaams Blok, VB’s predecessor.

Survey data had indicated that the cordon was a contributing factor to a declining vote share for VB. But with its surge in 2019, VB may be taking advantage of “fraying barriers” between right-wing populist factions and mainstream conservative parties in Germany and elsewhere in Europe to erode what N-VA leader Bart da Wever called “the Great Wall of China” in Belgian politics.

Shortly after the election, the N-VA met VB in the hope of forming a coalition in the Flemish Parliament. This was ultimately ruled out by other parties who chose to uphold the cordon. But the Belgian King met van Grieken, the first reception by the monarch of a radical right leader since the 1930s, and the VB has made a mark on the Flemish governing coalition’s policy proposals, particularly over integration.

While the Belgian government has not been formed, all legislative bodies below the federal level have formed coalitions which tell a story of polarization between Belgium’s communities.

Across Belgium’s regional bodies different colours reign: the Flemish regionalist yellow, Francophone socialist red, and Brussels’ multi-lingual Green. But the only parties which gained seats in May 2019 were the Greens (Ecolo and Groen), the VB, and the far-left Workers’ Party of Belgium (PVDA-PTB). While they are on opposite sides of the left-right divide, these parties’ voters share a lack of trust in the political system.

The “mainstream” political space between these parties is sparser. The N-VA and the PS have made clear that there is little common ground between their parties; the pull by challenger parties to the left and right is likely to make finding a common platform even more difficult.

This pull away from mainstream parties is a marker of European politics. Emmanuel Macron’s successes in France came at the expense of the Socialist Party, which lost 250 seats in the 2017 legislative elections. The UK’s 2019 European Parliament elections saw the governing Conservative Party fall to 5th place behind both the Green Party and the Brexit Party. In Swiss Parliamentary elections last month, the vote for Green parties increased substantially, but the radical right populist Swiss People’s Party (SVP) remained the largest in the legislature.

A Stalled State of Play

This rise of populism and hollowing out of the center are not only electoral phenomena; they affect the functioning of political institutions. Belgium is an exemplar of this erosion. In addition to the 127 days needs for the formation of a Flemish coalition, an unlikely combination of left-wing parties and the VB threatened a government shutdown after a last-minute budgetary amendment.

There is government stasis and uncertainty is present across Europe: in the difficulties faced by the Italian governing coalition, the prolonged and controversial selection process for the head of the European Commission, and the strikes and protests across Catalonia this month.