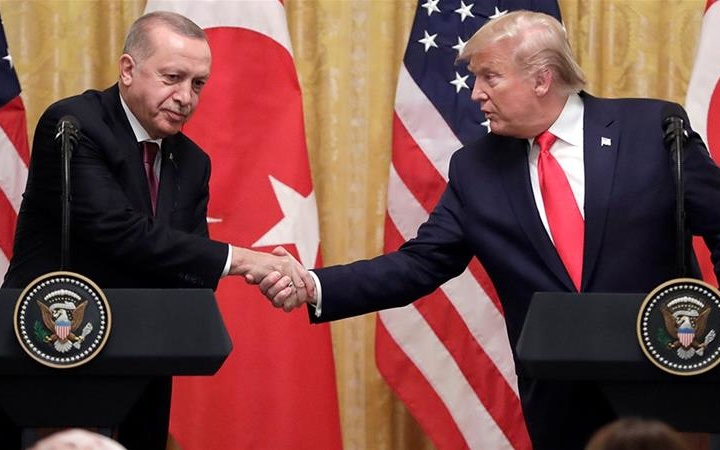 President Recep Tayyip Erdoğan has sealed Turkey’s political and military victory in northeast Syria with a visit to Donald Trump in the White House.

Little of substance was said in the press conference after Erdoğan’s meeting with Trump, but the mere appearance of the Turkish President being received with effusive praise by his US counterpart — only five weeks after Ankara’s cross-border offensive was launched, seizing Kurdish-held territory along the Turkish-Syrian border — confirmed a power play which has expanded Turkey’s control and sidelined the US Government in Syria.

Erdoğan pressed his advantage, criticizing Trump for inviting the commander of the Kurdish-led Syrian Democratic Forces, Mazloum Kobani — as always, labelled a “terrorist” by the Turkish President — to the White House. He claimed Kobani was responsible for hundreds of civilian deaths: “A person like this should not be welcomed by a country such as the United States.”

Erdoğan followed with the jab that he had returned Trump’s letter, sent to him on the day of the Turkish offensive, for showing a “lack of respect”.

Last month, after widespread criticism for his order to withdraw US forces from northeast Syria, Trump released the letter which chided Erdoğan, “Don’t be a tough guy. Don’t be a fool!”

Meanwhile, US agencies were scrambling after Trump’s main line that US personnel were only in Syria to control oilfields in the northeast.

Facing Trump’s order for complete departure, the Pentagon used the rationale to ensure that hundreds of troops remained, albeit outside the zone occupied by Turkey and allied anti-Assad fighters.

The US military and State Department see a force as necessary to prevent the resurgence of the Islamic State, removed this March from the northeast by the American-backed SDF; to challenge an expansion of Iranian influence in Syria; and to maintain links with Kurdish groups considered allies.

But Trump declared on Wednesday, “We’re keeping the oil. We have the oil. The oil is secure. We left troops behind only for the oil.”

Defense Secretary Mark Esper effectively pushed back Trump, telling reporters, “Our mission is the enduring defeat of ISIS. We’re going to have about 500 to 600-ish troops there, at the end of the day.”

Trump: “Erdoğan and I Are Very Good Friends”

Erdoğan stayed on the offensive by criticizing the US support of the SDF, which is led by the Kurdish militia YPG.

Turkey considers the YPG as “terrorists” who are part of the Turkish Kurdish insurgency PKK. It is demanding the complete withdrawal of the YPG from a zone 480 km (270 miles) long and 30 km (19 miles) deep along the border, extending east across the Euphrates River to Iraq.

Trump appeared oblivious to the issue, as well as to this week’s statements by the State Department that Turkey and the anti-Assad fighters may have committed a “war crime” in the occupation of the area.

The “ceasefire” is an October 22 agreement between Erdoğan and Russian President Vladimir Putin for joint military oversight of the zone, excluding the Americans. Ankara says it intends to use the area to resettle 2 million of the 3.6 million Syrians now in Turkey.

Trump made no reference to the arrangement, instead pouring effusive praise on the Turkish President and repeating Ankara’s line.

I want to thank the President for the job they’ve done. The President and I have been very good friends, we’ve been friends for a long time – almost from day one. We understand each others’ country. We understand where we are coming from….

I understand the problems that they’ve had, including many people from Turkey being killed, in the area that we’re talking about….

They’re highly respected in their country and in the region.