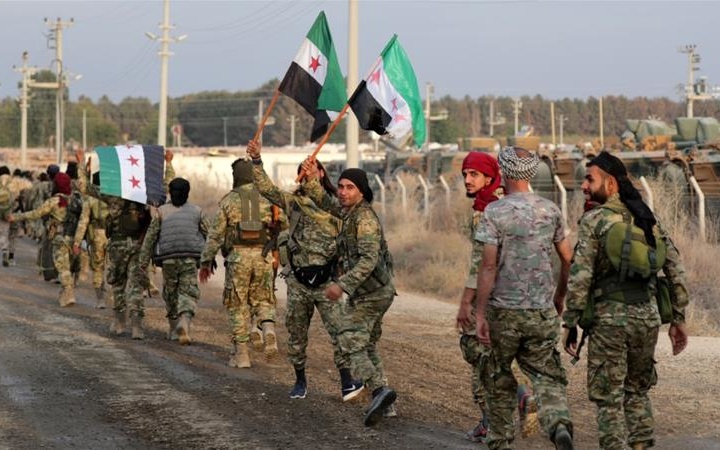 Two US defense officials revealed to The Wall Street Journal that the American military has at least one drone surveillance video of abuses amid Turkey’s takeover of mainly-Kurdish areas.

One official said the footage appears to show an execution of a detainee by anti-Assad fighters allied with the Turks, but added that it is not conclusive proof of a war crime, with additional information needed about the circumstances.

One senior official described the anti-Assad fighters as “thugs” and “bandits” and a US defense official told CNN last week that several pieces of information on potential war crimes weeks have come to the attention of US authorities in recent weeks.

US officials have repeatedly spoken of the possibility of war crimes by the Turkish-backed Syrians. One senior official described the fighters as “thugs” and “bandits”.

The leaks to the media reveal the ongoing division between the US military and Donald Trump after Trump’s agreement to the Turkish cross-border offensive, made during an October 6 call.

Trump said that 1,000 US troops in northeast Syria would withdraw, opening the way for the Turkish-rebel move into the Kurdish cantons of Kobani and Cezire. Erdoğan said the forces would control a zone 480 km (270 miles long) and 30 km (19 miles) deep, extending east across the Euphrates River to Iraq. He sought the resettlement kn the area of up to 2 million of the 3.6 million Syrian refugees in Turkey.

The Pentagon — which sees the US presence as a necessary check on Iranian ambitions in Syria, a barrier to any Islamic State resurgence, and a commitment to Kurdish allies who pushed ISIS out of the northeast — pushed back by telling Trump of the necessity of defending Kurdish-held oilfields. Hundreds of American personnel will remain, although outside the Turkish-controlled zone.

Ankara considers the Kurdish militia YPG to be part of the Turkish Kurdish insurgency PKK, which has fought Turkey’s security forces for 35 years. But the YPG is the leading element in the US-supported Syrian Democratic Forces, created in October 2015 to remove the Islamic State from the northeast.

US Official: “We’re Asking The Turks To Chase” Reports

On Tuesday, a “senior State Department official” gave details about attacks by the Turkish-allied fighters being investigated as potential war crimes.

Among them is the October 12 killing of Kurdish politician Hevrin Khalaf in her vehicle. US officials viewed Khalaf as a positive influence amid the contest for control of the northeast, and concerns about clashes between Arab and Kurdish groups.

An official added that there was a report of Turkey dropping white phosphorous, the use of which in populated areas is banned under international law, and “several examples of people, medical units and such, being hit by shell fire”.

But the official limited the criticism by saying the number of incidents is not “large” and is not growing:

We’re asking the Turks to chase them down. What the Turks told us is that they do take them seriously.

He said the Turkish assurance was they passed the complaints to the anti-Assad Syrian National Army for investigation.

The source distanced the US military, which supported Syrian rebels until 2015 before switching to the Kurdish-led Syrian Democratic Forces, from the anti-Assad fighters now alongside the Turks: “We don’t know these people particularly well. We don’t know how well they’re going to do. As far we’re concerned, our interlocutor on these things is Turkey because Turkey has been supporting these people and Turkey took the initiative to go across the border.”

Last week State Department spokeswoman Morgan Ortagus said in a statement: “We had serious concerns regarding reports that the Turkish-Supported Opposition may have engaged in violations of the law of armed conflict in northeast Syria, including reports of the killing of unarmed civilians and prisoners and reports of ethnic cleansing.”