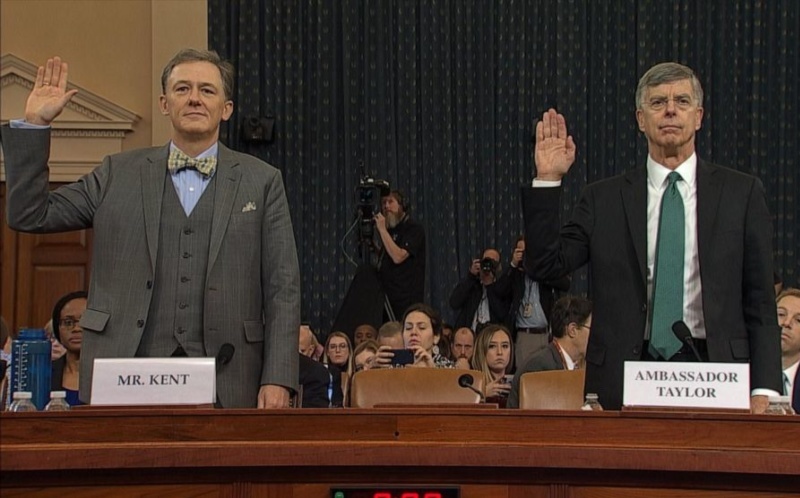 State Department official George Kent and US chargé d’affaires to Ukraine William Taylor are sworn in on first day of impeachment hearings into Donald Trump, US Capitol, November 13, 2019

In the first day of public impeachment hearings, two senior US diplomats set out more evidence of Donald Trump’s pressure on Ukraine for investigations to tarnish Presidential candidate Joe Biden and the Democratic Party and to cover up Russia’s involvement in the 2016 US election.

The top US diplomat in Ukraine, William Taylor, and the State Department’s lead on Ukraine, George Kent, carefully detailed the campaign of Trump and his personal attorney Rudy Giuliani, fending off attempts by Republican legislators to derail the hearing and to undermine their credibility.

In the day’s biggest revelation, Taylor spoke of Trump’s inquiry — the day after Trump’s call with Ukraine President Volodymyr Zelenskiy, which sparked a formal complaint by the CIA liaison with the White House and then the impeachment hearing — to US Ambassador Gordon Sondland about the state of the “investigations”.

One of Taylor’s staff listened to the July 26 conversation between Trump and Sondland, a Trump political appointee and central figure in the Trump-Giuliani campaign. After the discussion, Sondland told the official — believed to be David Holmes, who will testify in a closed-door session on Friday — that “President Trump cares more about the investigations of Biden, which Giuliani was pressing for”, than he did about Ukraine.

Sondland assured Trump “that the Ukrainians were ready to move forward”.

Taylor calmly but firmly challenged Trump and Giuliani for undermining US foreign policy towards Ukraine, threatening the security of a country facing Russian political and military pressure.

He reinforced the central claim of Trump’s abuse of power for personal gain — the freezing of $391 million of military aid unless President Zelenskiy announced the investigations.

Security was so important for Ukraine, as well as our own national interests. To withhold that assistance for no good reason other than help with a political campaign made no sense. It was counterproductive to all of what we had been trying to do. It was illogical. It could not be explained. It was crazy.

Rather than challenging the evidence, Republicans — led by Rep. Jim Jordan, put on the House Intelligence Committee only last week to defend Trump — misrepresented the testimony as “secondhand, third-hand, and fourth-hand” and claimed that Taylor and Kent were part of a “politicized bureaucracy” trying to remove Trump.

Trump and his staff, carrying out a plan coordinated with the GOP legislators, spent the day putting out messages on Twitter assailing Democrats and trying — through distortion of the case — to sweep away Trump’s link between military aid and investigations.

But the White House struggled as Taylor and Kent precisely detailed the “highly irregular” channel of Trump and Giuliani, assisted by Sondland, the US Ambassador to the European Union.

Asked Wednesday afternoon about his July call to Sondland, Trump said, “I know nothing about that.”

Sondland — who said in his closed-door testimony last month that, when he met Zelenskiy on July 26, he did not know of Trump’s pressure for the investigations — is scheduled to appear in the public hearings next Wednesday.

Asked if he had ever seen “another example of foreign aid conditioned on the personal or political interests of the president of the United States”, Taylor replied, “I have not.”

Kent said he concluded by mid-August that the Giuliani campaign was “now infecting US engagement with Ukraine, leveraging President Zelenskiy’s desire for a White House meeting”.

He criticized the “campaign to smear” US officials including Ambassador to Ukraine Marie Yovanovitch, whom Giuliani saw as standing in the way of his push for investigations. Yovanovitch was recalled by Trump in May: she testified last month of concern over “threats” after learning of Trump’s declaration to Zelenskiy that she would “go through some things”.

“In my opinion, those attacks undermined U.S. and Ukrainian national interests and damaged our critical bilateral relationship,” Kent said.