Iran Daily: Rouhani — “Without Money, We Cannot Run the State” 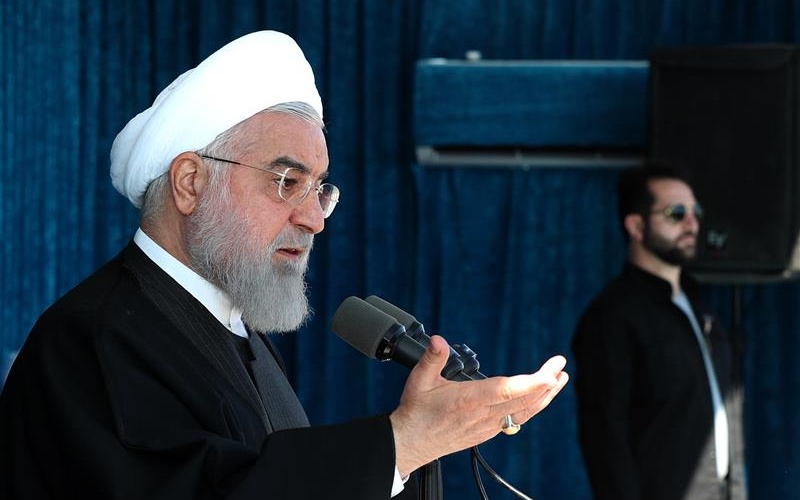 President Hassan Rouhani, facing economic challenges and regime in-fighting, has told an audience in southeast Iran, “Without money, we cannot run the affairs of the state.”

Radio Farda, supported by the US Government, emphasizes that Rouhani said in Kerman that the country’s situation has never been as “difficult and complicated”. He spoke of the contraction of Iran’s oil exports — up to 95%, according to some analysts and Iranian politicians — by comprehensive US sanctions.

“Iran is experiencing one of its hardest years since the 1979 Islamic Revolution,” Rouhani said.

“You Are Right About Having Hardships”

Rouhani said the Government needs $45 billion in revenues each year, and would expect $60 billion from oil income if there were no US sanctions.

The President’s website offers an abridged version of the remarks:

You are right about having hardships, but these conditions are made by the enemies and we did not start this….We have to run the country based on our own capabilities.

In contrast to Radio Farda’s presentation, the President’s site focuses on his comments “that the inflation trend has been downward and economic growth upward since April”.

However, the site does portray Rouhani’s concern about oil revenues:

We all know that our country is not in normal conditions. A person who is not familiar with budget and economy may say that not selling oil is not very important, but the truth is that these great God-given resources are here for us to use.

After the sanctions were lifted because of the Joint Comprehensive Plan of Action [2015 nuclear deal], many of our oil wells needed to be repaired. In the early 2016, we spent $800 million for repairing these wells, and that year, we had the highest rate of oil sells.

The remarks undercut the public line of the Supreme Leader and many officials that Iran can achieve self-sufficiency in a “Resistance Economy” by diversifying non-oil exports.

Rouhani emphasized the need for Iranians to pay taxes amid the challenge faced by the Government: “The Supreme Leader said in a meeting that all authorities must tell people that paying tax is a religious duty.”

The President also referred to his battles with Iranian hardliners, which have escalated in the past week over allegations of corruption.

It is easy to disappoint, defame, and discredit someone, but who can return the credit that a medium, individual or tribune has taken away from a person?

It is never right to make people worried about the future; to tell them that the way you have chosen is not right and the way we say is; this means arrogance and there is no arrogance higher than this.

Rouhani continued, “Let us all unite and join hands in this week, which is the week of unity and happiness, and take the right path”.

However, Iran News headlines, “President Says Country’s Situation Is ‘Not Normal'”. Halfway down the article, it reports Rouhani’s comments on oil revenue almost exactly as they are presented by Radio Farda.

It adds, “Rouhani explained that to some extent Iran can make up for the deficit in oil revenue by collecting full taxes but noted that the government is able to collect only up to one third of estimated taxes.”