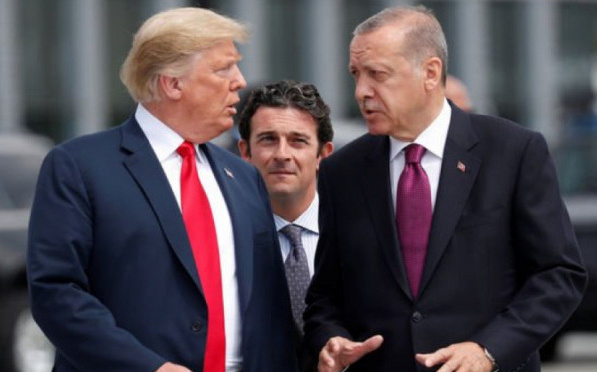 Turkey’s officials will discuss their Syria offensive with US Vice President Mike Pence on Thursday, but the meeting has been overtaken by Donald Trump’s bizarre letter to Turkish President Recep Tayyip Erdoğan.

Trump’s message is dated October 9, the day the offensive was launched. However, it was released yesterday after he had a “meltdown” when Democratic leaders told him of the large number of Republicans who oppose his response to the cross-border attacks.

It opens with a threaten of economic ruin for Turkey:

Trump maintained that “General Mazloum” — Ferhat Abdi Şahin, the head of the formerly US-backed, Kurdish-led Syrian Democratic Forces — “is willing to make concessions that they would never have made in the past. I am confidentially enclosing a copy of his letter to me, just received.”

But in a rambling statement to reporters, Trump turned against the Kurdish groups whom are being attacked by Turkey and Syrian rebels. He went even farther than Erdoğan in denouncing the “terrorists”.

Trump said the Syrian Kurdish factions were “no angels” and then declared, “The PKK” — the Turkish Kurdish insurgency which has fought Ankara’s security forces for 35 years — “is more of a terrorist threat in many ways than ISIS”.

Caught between domestic criticism of his acceptance of the offensive — made in a phone call with Erdoğan on October 6, three days before the launch of the assault — Trump concluded his letter to the Turkish President:

Turkish officials responded, “We just dumped his letter to the trash.” They said Erdoğan had given his answer “on the same day at 4 pm” by launching military operations and pledging they would not stop until the mission — to secure a 480-km (270-mile) long and 30-km (19-mile) deep area along the Turkish-Syrian border — was accomplished.

Former Prime Minister Ahmet Davutoglu said all meetings with US officials should be cancelled in light of Trump’s letter: “The Turkish nation and state were offended.”

Trump brushed away any objection by saying that Pence and Erdoğan will have a successful meeting, even though the Turkish President has said he will not sit down with his visitor.

Trump continued that his latest move is “strategically brilliant” and repeated his warning of US sanctions and tariffs that “will be devastating to Turkey’s economy”.

Russia, which is balancing between its support of the Assad regime and its cooperation with Turkey, immediately tried to take advantage. Kremlin spokesman Dmitry Peskov told reporters in a conference call, “You don’t often encounter such language in correspondence between heads of state. It’s a highly unusual letter.”

Peskov played up Moscow’s concern to work out the “humanitarian situation” with Turkey, saying Russian President Vladimir Putin will host Erdoğan in the southern Russian resort of Sochi next Tuesday.

But the Russian Foreign Ministry also said that the Assad regime must ultimately take control of the border, including Erdoğan’s “safe zone”, and despite Kurdish demands for autonomy in their cantons of Kobani and Cezire.

We are convinced that long-term stability and security in this region of Syria, and in the country and the Middle East in general, is possible only on the basis of Syria’s sovereignty and territorial integrity.

This means at the end of the day, the Syrian legitimate government must be handed the ultimate control over all national territory, including control of the border areas with Turkey.

Russia has already secured the entry of regime forces into the city of Manbij, at the westernmost point of Kurdish control, after the Kurdish groups offered the concession in return for protection from the Turkish-rebel offensive.

The regime is also seeking to occupy Kobani on the Turkish border, but the Turkish-rebel force is close to the city and has cut off the key road into it.