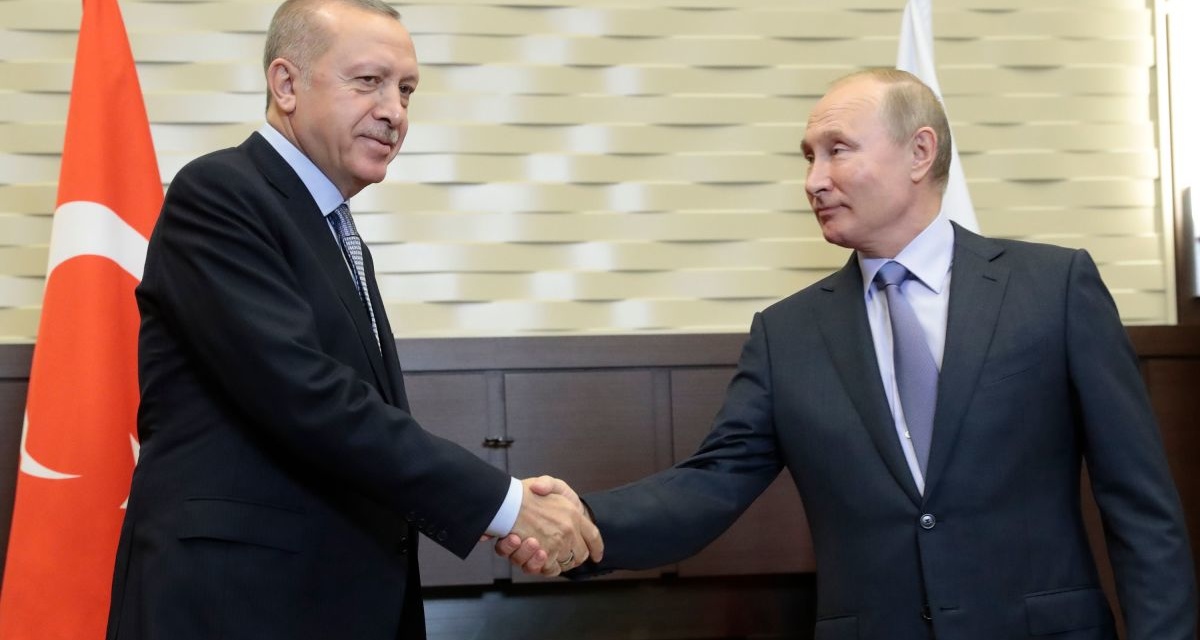 Turkey and Russia have agreed joint control of northeast Syria, sidelining the US but raising questions about the future of Kurdish autonomy, the position of the Assad regime, and the status of anti-Assad forces.

The deal was announced after six hours of talks between the Turkish and Russian Presidents, Recep Tayyip Erdoğan and Vladimir Putin, in the southern Russian resort of Sochi on Tuesday.

The 10-point agreement reaffirms Turkey’s proposed area of control, 480 km (270 miles) long and 30 km (19 miles) deep along the Turkish-Syrian border and across the Kurdish cantons of Kobani and Cezire. It supports Ankara’s demand for the withdrawal of the Kurdish militia YPG, which Ankara labels as “terrorists” and part of the Turkish Kurdish insurgency PKK.

In a headline victory for the Assad regime, the pact says regime border guards will join Russian military police in assuring the withdrawal of the YPG. Six days later, Russian and Turkish forces will begin joint patrols of a 10-km deep strip along the border.

Erdoğan had backed the removal of Assad and supported anti-Assad forces since the start of the Syrian uprising in March 2011. However, since August 2016 he has maneuvered through cooperation with Putin, pushing aside the US in the political process.

The Russian President said on Tuesday that the agreement was “very important, if not momentous, to resolve what is a pretty tense situation which has developed on the Syrian-Turkish border”. He said he had spoken after the summit to Bashar al-Assad, who had accepted the agreement.

However, the accord is vague on essential political questions.

The two sides stressed that about 90,000 Islamic State fighters and their families must remain captive in camps guarded by the Kurdish-led Syrian Democratic Forces.

“It’s important that members of terrorist organizations, including ISIS, whose militants are held captive by Kurdish armed groups and are trying to break free, do not take advantage of the Turkish armed forces actions,” Putin said.

But Turkey and Russia did not commit to assuming the oversight of the camps — the largest of which, al-Hol with about 70,000 fighters and relatives — is outside the area of agreement. Instead Russian Foreign Minister Sergey Lavrov said the SDF must understand its “responsibility” in preventing escapes.

And there is no statement on the political future of the Kobani and Cezire cantons, which Kurdish groups — including the Syrian Kurdish Democratic Union Party (PYD) and its YPG militia — have declared as the autonomous region of Rojava.

The Assad regime, which violently repressed the Kurdish movement in 2004-2005, insists that it will regain control over “every inch” of Syria.

Putin appeared to challenge the Kurdish autonomy but was careful not to target any specific faction: “We share those concerns [of Turkey]. Those separatist movements were recently instigated. It is important that terrorists do not take advantage of the Turkish military operation Operation Peace Spring in Syria.

Are you confused about all of these locations, towns, patrols and deals?

No worries, @suriyegundemiEN has prepared an excellent map for you to show what is what in Northern Syria

How Trump Paved Way for Ankara and Moscow

The path to the Turkish-Russian agreement was paved by Donald Trump’s acceptance, during an October 6 call with Erdoğan, of Ankara’s cross-border operations and order for the withdrawal of 1,000 US troops in northeast Syria. Three days later, Turkish forces and Syrian rebels launched an offensive concentrated on towns along the border such as Ras al-Ain and Tel Abyad.

Last Thursday, Turkey obtained the Trump Administration’s agreement to an ultimatum for YPG withdrawal from part o the border area and disarmament of heavy weapons, with a 5-day pause in military operations as compliance was established. The Syrian Democratic Forces — created by the US in October 2015 to fight the Islamic State and led by the YPG — pulled out of Ras al-Ain but did not commit to departure from other areas.

Despite the effective sidelining of the US in Syria, Vice President Mike Pence supported the Turkish-Russia accord: “We may well give the international community an opportunity to establish a safe zone between Turkey and the Kurdish population in Syria that will ensure peace and security.”

Pence’s spokeswoman Katie Waldman declared that the Vice President had received a letter from Syrian Democratic Forces commander Mazloum Kobani that forces had withdrawn “from the relevant area of operations” under last Thursday’s Turkish-US accord.

However, US envoy to Syria James Jeffrey dismissed the deal, telling a Congressional hearing:

It’s full of holes. All I know it will stop the Turks from moving forward. Whether the Russians will ever live up to their commitment, which is very vague, to…get the YPG out of their areas, I don’t know.

Jeffrey said he was not consulted before Trump’s sudden order for withdrawal on October 6.

Turkey and the US had differed over the size of the area covered by their agreement. Tuesday’s declaration by Ankara and Moscow covers a “safe zone” three times larger than that announced by the Americans.

Lavrov pointedly dismissed the US as irrelevant for the future of northeast Syria: ”We do not particularly look at the United States and its stance. That stance is quite variable and contradictory, and of course, the coalition led by the United States is in Syria illegally. This is well known.”

Erdoğan added the criticism, “Promises were not kept. If we make concessions, we will clear the way for terrorists.”