Syria Daily: No Movement in Talks Between Russia-Turkey-Iran Presidents 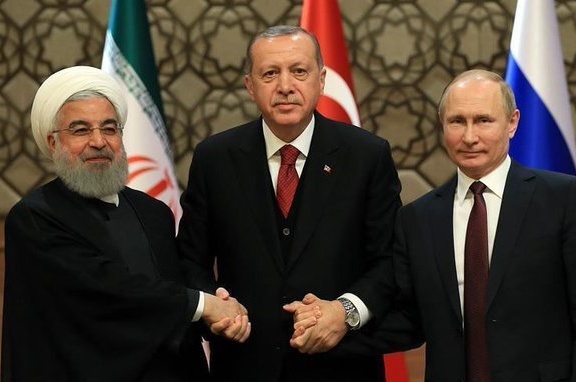 A meeting in Turkish capital Ankara, between the Turkish, Russian, and Iranian Presidents, has brought no advance over Syria’s 102-month conflict.

Turkey’s Recep Tayyip Erdoğan, Russia’s Vladimir Putin, and Iran’s Hassan Rouhani gathered on Monday as part of the “Astana” process pursued by the three countries. Afterwards, they issued a token statement about forming a Constitutional committee, 20 months after it was first proposed, but with little detail on how the initiative — blocked repeatedly by the Assad regime’s objections to the inclusion of opposition representatives — would be completed.

Instead, each of the Presidents pushed their individual talking points.

Erdoğan pressed for the suppression of the leading Syrian Kurdish political faction PYD and its YPG militia, who control much of northeast Syria.

“The [Turkish Kurdish insurgency] PKK, and its extensions the People’s Protection Units (YPG) and the Democratic Union Party (PYD), are the biggest threat to Syria’s future. As long as the PKK presence in the country continues, neither Syria nor our region can find peace.

Erdoğan has warned of military action to remove the “terrorists”. For now, however, he has settled for oversight — alongside the US, which supports the Kurdish factions as part of the Syrian Democratic Forces — of a “safe zone” along the Turkish-Syrian border.

Syria Daily, September 16: Assad Regime — We Will Retake “Every Inch” of Kurdish Territory

Pushing his argument, the Turkish President said Putin and Rouhani agreed that supporting “terrorists” under the pretext of fighting the Islamic State is “unacceptable”, and that a “terrorist corridor” cannot be tolerated.

The US fostered the Syrian Democratic Forces in autumn 2015 to push ISIS out of northeast Syria, a task accomplished this past March.

Putin focused on the Russian-Assad regime offensive to overrun the last major opposition area in northwest Syria, saying “fighting terrorism” in Idlib Province is still a “major concern”: “We agreed to continue our joint efforts to eradicate the terrorist hotbed, and Russia is ready to support the Syrian army in launching local operations directed at rooting out the terrorist threat, wherever it appears.”

Russia and the regime launched the offensive in late April, seizing almost all of northern Hama Province and parts of southern Idlib in the territory with an estimated 3 million people, about 20% of Syria’s remaining population.

More than 1,000 civilians have been killed, thousands wounded, and more than 400,000 displaced.

Erdoğan has warned of the “humanitarian catastrophe”. He has said that Turkey, which hosts 3.6 Syrian refugees and has closed its border with Idlib, cannot take any more.

Putin has rejected the Turkish President’s political attempt to halt the offensive, saying the two men agree on the campaign against “terrorism”, although the Russian President did declare a pause in attacks at the start of this month.

Rouhani took up the theme, adding Iran’s denunciation of the US presence in Syria alongside the Syrian Democratic Forces and at a base in the east on the Iraqi border.

The illegal presence of American military forces on the Syrian soil threatens territorial integrity and national sovereignty of Syria as an independent country, which is also a member of the United Nations. I emphasize that it is necessary for American forces to leave this region as soon as possible, so that, the sovereignty of the Syrian government could be extended to eastern and northern Euphrates regions like other parts of the Syrian territory.

The Iranian President also spoke about Israel’s periodic airstrikes on Iranian and Assad regime positions inside Syria:“The Zionist regime has increased its aggressive assaults against the Syrian territory in the past months while officials of this regime have claimed responsibility for those assaults and have even extended those acts of aggression to Iraq and Lebanon.”