Iran Daily: Tehran and US Trade Threats After Attack on Saudi Oil Facilities 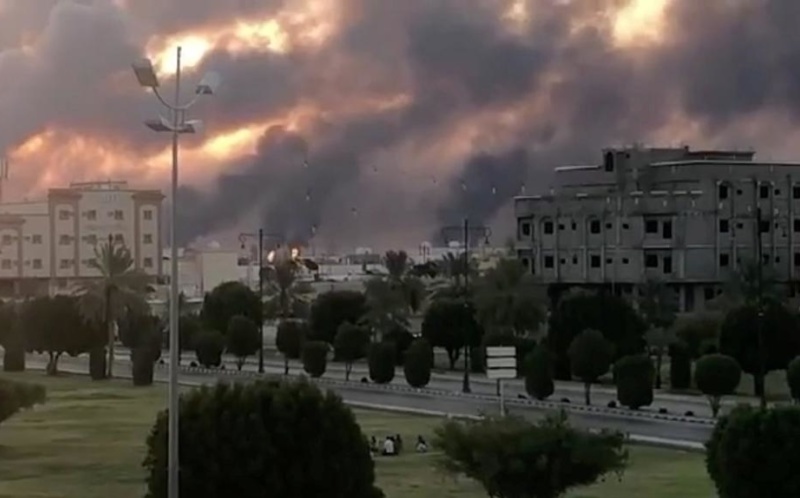 Officials in the US and Iran have traded threats after Saturday’s attacks on two Saudi oil facilities.

Yemen’s Houthi insurgency, which controls much of the country and has battled a Saudi-led coalition for 4 1/2 years, claimed the strikes affecting more than half of Saudi Arabia’s production.

But the Trump Administration claims that Iran is behind the attacks, by at least 10 drones and including misisles, and that the operation was launched from Iraq — a claim the Iraqi Government denies.

A source familiar with #Aramco situation told us earlier today that it was a “swarm attack”, a mix of > 20 drones and missiles, at least half of which were "suicide" drones.#USA & #KSA, he said, are 'certain' that attack was launched from #Iraq but 'smoking gun still missing'

The head of the Revolutionary Guards’ air force, Hajizadeh said:

In addition to US bases in the region, we have all their vessels, including aircraft carriers and warships, under fire of our missiles to a radius of 2,000 km, and are constantly monitoring them.

They thought that they could get out of our range of fire if they stand 400 km away. However, no matter where they are, if a conflict is ignited, their warships will be first to be targeted by our fire.

He continued, “We rank first in the missile technology at the regional level and are placed among the few global powers….We are pessimistic about the future and are always ready for the great war.”

President Hassan Rouhani took a much different approach. In Ankara for a meeting on Syria with Turkish and Russian counterparts, he avoided direct confrontation while portraying the US as the problem in the Middle East.

Today, what is taking place in this region and has concerned many countries of the world is the result of erroneous plans and conspiracies of the United States. We have declared time and again that regional issues must be resolved by regional countries and through dialogue.

Donald Trump, or a member of his staff, contributed to the rising tension via Twitter:

Saudi Arabia oil supply was attacked. There is reason to believe that we know the culprit, are locked and loaded depending on verification, but are waiting to hear from the Kingdom as to who they believe was the cause of this attack, and under what terms we would proceed!

In a more matter-of-fact tweet, Trump or the staffer said the White House had “authorized the release of oil from the Strategic Petroleum Reserve, if needed, in a to-be-determined amount sufficient to keep the markets well-supplied”, to limit the increase in global prices.

The step was not sufficient, however, to prevent a historic rise in the oil price on Monday morning.

London’s Brent futures leapt almost $12 to $71 per barrel in the seconds after opening, the biggest surge the launch of the market in 1988. About half of that 20% rise has dissipated as the markets adjust, but it is still the biggest increase in more than three years.

Saudi officials said they can restore production of 2 million barrels per day — about one-third the lost output from the attack — by the end of Monday.

Meanwhile, US officials backed up their allegations against Iran with the release of satellite photographs claiming to show at least 17 points of impact at several Saudi energy facilities. The officials said the images proved the strikes came from the north or northwest, pointing to Iraq or Iran rather than Yemen as the source.

Administration officials also said a combination of drones and cruise missiles — “both and a lot of them” — were used.

However, the satellite photographs did not appear to be decisive, with some seeming to show damage on the western side of the Saudi facilities, rather than impact from the direction of Iran or Iraq.

The officials said that they will seek to declassify more intelligence in coming days, answering questions with forensic analyses of the models and the source of manufacture and launch.