TrumpWatch, Day 970: Trump Steps Back on Showdown With Iran Over Saudi Attacks 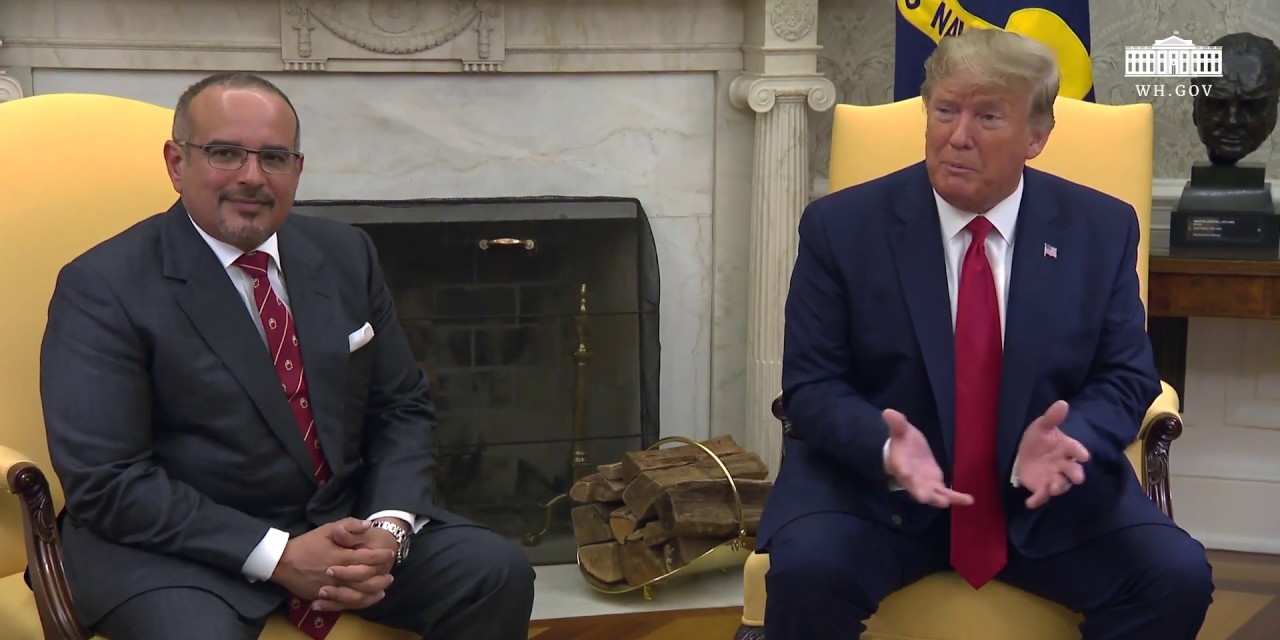 Donald Trump at a White House photo opportunity, alongside the Crown Prince of Bahrain, September 16, 2019

Donald Trump has stepped back from confrontation with Iran over Saturday’s drone and missile attacks on two Saudi oil facilities, replacing his “Locked and Loaded” tweet with a statement that he would “like to avoid” conflict.

Trump’s Sunday response was that the US military was “ready to act” but “waiting to hear from the Kingdom as to who they believe was the cause of this attack”.

The Saudis made clear that they blamed Iran, saying the attacks came from Iranian-backed groups in Iran rather than Yemen’s Houthi insurgency, which claimed responsibility. US agencies also pointed to Tehran, although they implied on Monday that the drones and missiles were launched from inside the Islamic Republic.

Asked on Monday if Iran is behind the strikes that more than halved Saudi oil production, Trump said, “It’s looking that way,” although he pushed back a reporter’s question whether he was certain: “That’s being checked out right now.”

Asked if he wanted war, Trump rambled and talked up US military capabilities. He finally said, “With all that being said, we’d certainly like to avoid [war].” He then returned to his line — part of his pursuit of a face-to-face meeting with Iranian leaders — that “I know they want to make a deal. At some point it will work out.”

Trump tried to play down the effect of the attack on oil prices: “They haven’t risen very much, and we have the strategic oil reserves, which are massive.” US release some of those reserves would bring [the global price] right down.”

The price for Brent crude jumped 20%, from $60 to $71 per barrel, at the opening of the London market on Monday. Although the sharp increase was soon halved, the price crept upwards amid renewed doubts about Saudi restoring production, ending at above $68.

Trump’s shift in line may have been prompted by the Pentagon’s recommendation of a restrained response to the attacks.

Sources told The Washington Post that military officials fear a conflict with Iran could escalate as the Pentagon is trying to draw down involvement in areas such as the Middle East and Afghanistan and focus on China. They highlighted risks to more than 70,000 US personnel, under Central Command, from Egypt to Pakistan.

The United States military, with our interagency team, is working with our partners to address this unprecedented attack and defend the international rules-based order that is being undermined by Iran.

Officials emphasized to the Post that no US personnel or facilities were targeted in Saturday’s attacks, and they said a legal basis for any response must be established.

But Trump’s changing position also echoes his U-turn in late June. He initially sanctioned US airstrikes inside Iran, following the Revolutionary Guards’ downing of an American drone, but quickly withdrew the order as warplanes and ships moved into position.

On that occasion, Trump gave the pretext that he learned, after the order for strikes was issued, that they could kill up to 150 Iranians.