Syria Daily: Assad Regime — We Will Retake “Every Inch” of Kurdish Territory 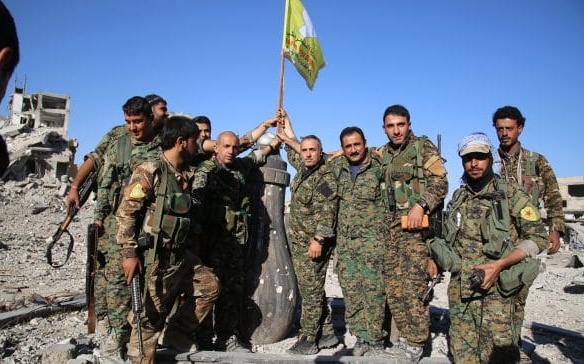 The Assad regime has vowed to take “every inch” of territory controlled by Kurdish factions in northern Syria, declaring that the US-supported, Kurdish-led Syrian Democratic Forces are “separatist terrorist militias”.

The regime’s Foreign Ministry said, in a letter to the UN Secretary-General and President of the Security Council, that the SDF was carrying out “criminal and repressive acts…match up with the schemes implemented by states agents to the USA and prepared by authorities of the Israeli occupation for the region”.

The Ministry declared, without producing evidence, that the SDF was “kidnapping, torturing, killing and displacing civilians” and “illegitimately recruiting youth with the aim of imposing a new status quo that serves the US and Israeli schemes”.

The SDF was created by the US in autumn 2015 to push the Islamic State out of northeast Syria. The last ISIS-held village was captured in March, with tens of thousands of fighters and their families taken to camps.

The Assad regime has periodically denounced the Kurdish groups and the SDF. In late August, regime and Iranian military sites declared that a 200-truck US convoy was bringing in new equipment to an SDF “besieging tens of thousands of civilians in the area”.

But Sunday’s statement appeared to step up pressure by repeating the regime’s phrase that it will “restore each inch of the Syrian territories and liberate them from terrorism” — a phrase used to sanction Russian-backed offensives to overrun opposition areas.

Since late April, Russia and the regime have been trying to reoccupy the last major opposition area, Idlib and northern Hama Provinces in northwest Syria. They broke through anti-Assad lines in early August, seizing almost all of northern Hama and parts of southern Idlib, but paused the ground assault at the start of September to consider next steps.

The Foreign Ministry’s declaration against the Kurds also signaled that the regime’s talks with Kurdish groups on a political resolution are suspended, if not halted for good.

Over the past year, with Russian encouragement, Assad officials have talked to some Kurdish factions. However, the regime has refused to give any ground on the Kurdish requirement of autonomy in areas held by the SDF, led by the Kurdish militia YPG.

Multi-Sided Tension Over Future of Northeast

The Kurds have declared a state of “Rojava”, with Kobani and Cezire cantons in northern Syria across much of Raqqa, Hasakah, and Deir ez-Zor Provinces and extending as far west as eastern Aleppo Province.

Earlier this month Turkey and the US began implementation of a 425-km (250-mile) “safe zone” along the Turkish-Syrian border, across the cantons and including territory from the Euphrates River east to the Iraq border.

However, the size of the zone is unclear and the Turkish Government continues to demand the withdrawal of the “terrorist” YPG militia. Ankara considers the YPG to be part of the Turkish Kurdish insurgency PKK.

See Syria Daily, Sept 15: US — No More Troops for Joint Patrols with Turkey in Northeast

Turkish President Erdoğan indicated that northwest Syria, rather than the northeast, will be the focus of his talks with Putin and Rouhani today: “Idlib will be in the focus of our attention at the trilateral meeting in Ankara. Opinions will also be exchanged on [Turkish] observation points and the fight against terrorist groups.”