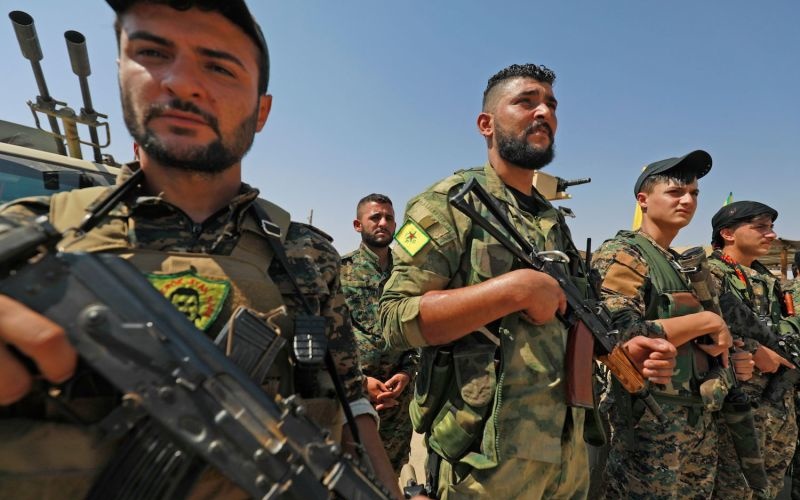 Backing up its threat to attack northeast Syria, the Assad regime has stepped up its propaganda attacks on the Kurdish-led Syrian Democratic Forces.

The brief article provides no evidence for its claim that the “US-backed…militias” stormed houses in cities and towns through the province, with a largely Kurdish population, to “forcibly recruit” the abducted youth.

It also asserted that children and women were seized, and that “government facilities and public properties” in Hasakah and Raqqa Provinces. The concluding paragraph proclaims that “a child was killed after being run over by a vehicle for QSD militias” in the al-Houl camp, which holds about 70,000 Islamic State fighters and their families.

Syrian opposition outlets and Arab media have accused the SDF of forced conscription of young men, and the UN Commission of Inquiry for Syria supported the claim in a 37-page report in March 2018.

But the Assad regime has only recently made the allegation, as it asserted that it will recapture Kurdish-held territory in the north and east of Syria.

Two weeks ago, the regime’s Foreign Ministry asserted, in letters to the UN, that the SDF was carrying out “criminal and repressive acts…match up with the schemes implemented by states agents to the USA and prepared by authorities of the Israeli occupation for the region”.

The Ministry declared, without producing evidence, that the SDF was “kidnapping, torturing, killing and displacing civilians” and “illegitimately recruiting youth with the aim of imposing a new status quo that serves the US and Israeli schemes”.

It repeated the regime’s phrase that Damascus will “restore each inch of the Syrian territories and liberate them from terrorism” — a phrase used to sanction Russian-backed offensives to overrun opposition areas.

Tension in the Northeast

Kurdish groups have declared a state of “Rojava” in the Kobani and Cezire cantons in northern and eastern Syria. The area covers much of Raqqa, Hasakah, and Deir ez-Zor Provinces and extends as far west as eastern Aleppo Province.

Talks between the Assad regime and some of the groups have been held in Damascus, but they broke down over the regime’s refusal to countenance Kurdish autonomy.

In late August, regime and Iranian military sites tipped off the shift in position, declaring that a 200-truck US convoy was bringing in new equipment to an SDF “besieging tens of thousands of civilians in the area”.

Russia, whose military and political support has been essential in any regime advance since Moscow’s military intervention in September 2015, has made no comment about the recent statements from Damascus.

The SDF and Kurdish groups are also facing pressure from Turkey, which has declared a “safe zone” along 480 km (270 miles) on the border across Kobani and Cezire cantons. Turkish President Recep Tayyip Erdoğan, who has warned of military operations, has said the area will host 1 million Syrian refugees returned from Turkey.

Ankara considers the Kurdish militia YPG, the leading faction in the US-supported SDF, to be part of the Turkish Kurdish insurgency PKK.