Syria and Russia in the Age of Disinformation 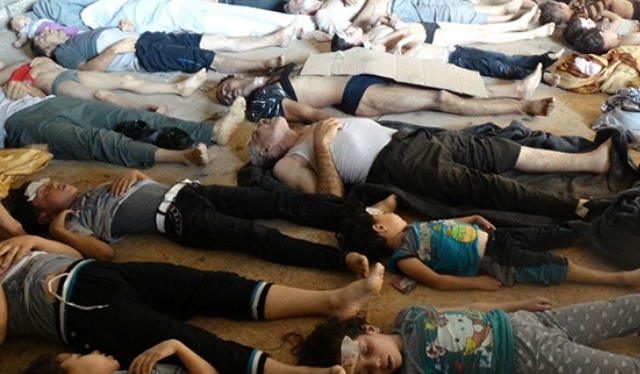 Amil Khan, an associate at London’s Royal Institute of International Affairs and a former Reuters journalist, writes for the Foreign Policy Centre about the Russia disinformation campaign to protect Syria’s Assad regime and concludes:

So far, we have seen malign actors recognise these factors and put them to use. The question for those working to lift living standards, increase the remit of international human rights, and achieve other positive outcomes is how to ethically and morally adapt their methods to the same new reality.

In April 2017, I was sitting in an office with Syrian rights activists watching, in real time, as the Syrian regime and Russia manipulated a second US President.

The current discussion about disinformation is focused very firmly on Trump’s election and the Brexit referendum. As critical as both issues are to the future of international stability, the emotion vested in both topics obscures rather than illuminates the impact disinformation has on the way influence is being wielded on the global stage.

Somewhere between the US-led invasion of Iraq and the Arab uprisings against dictatorial rule, something fundamental in the way global audiences receive and react to information changed. Political insurgents had long been watching, waiting for a chance to challenge the established power of their enemies. Ayman al-Zawahiri, Al Qa’eda’s number two at the time, famously declared in the early years of the 21st century, “More than half of this battle is taking place in the battlefield of the media.” As a Middle East reporter, I saw the effort the group put into trying to circumvent traditional media and reach its intended audiences directly.

Russia had also been watching. From 2013 to 2017, I worked with Syrian activists hoping to remove the corrupt and abusive regime in Damascus. My time working on Syria was bookended by highly sophisticated disinformation campaigns that melded diplomatic, media, and military activity to achieve real-world outcomes. Examining the techniques used by Russia (and adopted by other actors since) raises questions about the measures policymakers are hoping will return us to a simpler era.

From Sarin on East Ghouta to Sarin on Khan Sheikhoun

The two most sophisticated Russian disinformation operations I observed came in response to the Damascus regime’s use of chemical weapons against civilians. Russia’s efforts in both cases is not surprising when you consider that the Kremlin’s investment in the Assad regime was most seriously threatened not by the military or political efforts of its adversaries, but by international blowback to its ally’s use of poison gas.

Between 2013 and 2017, Russia had developed its techniques in line with changes in the global media environment. The earlier effort focused on manipulating established media outlets, or at least leaning on their credibility, while the later campaign largely bypassed established media in favor of fringe outlets and social media networks. In both cases, however, the underlying strategic approach displayed a keen understanding that Western decision makers will ultimately be constrained by popular opinion; while implementation recognized that Western media systems can be gamed or bypassed.

On the morning of August 21, 2013, I was told by distraught Syrian colleagues that the regime had used poison gas on sleeping civilians in an area besieged by government forces and the Lebanese militia Hezbollah. The Syrian opposition, advised by individuals such as myself with backgrounds in journalism or political lobbying, called on locals to send through videos showing proof of the regime’s actions, which were forwarded on to journalists covering the story. The Kremlin was quick to establish an alternative depiction of events. Russian Foreign Minister Sergey Lavrov told journalists the rebels had used the weapons on their own families in the hope of provoking a Western military response.

Russia’s effort seemed doomed to failure. Responding to the weight of facts emerging from the ground, most media outlets concluded the regime was guilty. A Western military response seemed inevitable.

When I first noticed photos and comments purporting to be from ordinary Americans calling on their government not to come to the “aid of Al Qa’eda in Syria”, I wasn’t unduly concerned. However, the posts seemed to become more numerous as the UK House of Commons geared up for a vote on military action against the regime. On the morning of the vote, journalists, political analysts and even political figures started mentioning they had heard that respected US news agency Associated Press was reporting that the rebels were actually responsible. In several public statements, Lavrov coolly questioned the Western focus on military action when the “evidence is not something revolutionary. It’s available on the internet”. [4]

It was days after the government of David Cameron lost the Commons vote and the Obama administration climbed down from the threat of military action that we were able to understand what was happening. AP had not found that the rebels were responsible for killing their own sleeping children. Instead, a little-known outlet called Mint Press operating from the US with assistance from a supporter of the regime had printed an article from a stringer who had travelled to Syria and repeated claims he had heard whilst there. As an Arabic speaker, he asked a friend – who also sometimes freelanced for the AP – to help with copy editing. Mint Press very prominently played up the tenuous connection, and other outlets, online trolls and regime supporters obscured the issue further until social media Chinese whispers transformed a rumour into a popularly-believed ‘fact’.

Of course, it’s not possible to determine what part any specific manipulative technique played in the final outcome. What is clear, however, is that the Kremlin had realized winning the battle for popular perceptions resulted in winning wars. It was also clear that Russia had been able to game Western news media through a very sophisticated understanding of how stringers work, how to pitch to editors and the way information moves between outlets – morphing slightly as it does so according to the editorial policy of individual websites, newspapers and channels. For context, it is important to understand that Russia had developed and successfully exploited an intimate understanding of the weaknesses of free media – of which it has little domestic experience of itself.

The second time Russia needed to bail out the Syrian regime from the possibility of direct and catastrophic Western military intervention, the White House had a new occupant and the news environment looked radically different. Russia’s experience seeding narratives and moving them between different information eco-systems was put to good use.

On the morning of April 4, 2017, Syrian social media networks exploded with harrowing photos and videos of men, women and children choking to death as they convulsed on the ground. Western journalists raced to uncover what had happened, much as they did four years previously. Similarly, Syrian activists raced to find them footage and eye witnesses in the hope they would be able to prove beyond doubt what was happening on the ground. Activists expected to have to counter spurious claims on news media. However, the Russian playbook had evolved. It now didn’t need traditional media.