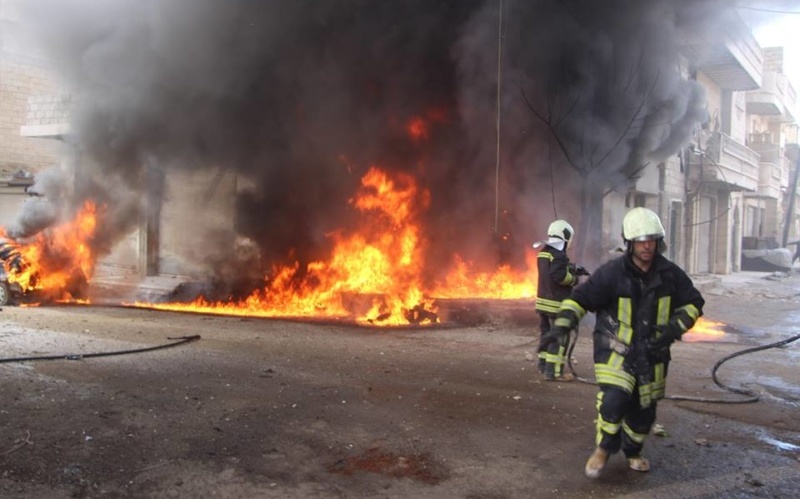 Russian President Vladimir Putin has indicated that no one and nothing will halt the Russian-regime offensive in northwest Syria.

Speaking at a joint news conference ahead of talks with French counterpart Emanuel Macron, Putin said:

We see [anti-Assad forces] staging attacks from there. Moreover, and it is very dangerous, we see militants moving from this region to other parts of the world, and it is an extremely dangerous thing.

We support efforts of the Syrian army which is conducting local operations to neutralize these terrorist threats.

Putin made no comment about bombing of a Turkish military convoy — with conflicting reports over whether three civilians or three Turkish-supported rebels were killed — and the slaying of almost 900 civilians, wounding of thousands, and displacement of more than 500,000 by Russia and the Assad regime since late April.

The Turkish Defense Ministry challenged Russia over the attack on the convoy, which was en route to two positions to check any further advance of the Russia-reigme offensive:

The statement summarized, “We strongly condemn this attack which contradicts the existing agreements, cooperation and dialogue with the Russian Federation. Without prejudice to our rights to self-defense, we expect the necessary measures to be taken to prevent recurrence of such incidents.”

The Assad regime’s Foreign Ministry condemned the Turkish convoy, falsely claiming that it was “to help the defeated terrorists of Jabhat al-Nusra”.

Ankara, with military forces alongside rebels in northwest Syria since August 2016, backs the National Liberation Front and National Army — both of which are opposed to the Islamist bloc Hay’at Tahrir al-Sham, which succeeded Jabhat al-Nusra, although the groups are approaching military co-operation against the Russia-regime offensive.

Journalist Elizabeth Tsurkov begins a valuable thread about the situation in northwest Syria:

Rapid opposition losses in southern Idlib & northern Hama in the past 2 weeks prompted Turkey to send additional convoys into Idlib, risking the lives of its soldiers & confrontation with the regime & Russia. What's behind these losses?

After setting out the main reason for the sudden fallback of the anti-Assad forces, Tsurkov explains from her contacts with local sources:

How does all of this affect civilians? This collapse in rebel ranks is terrifying civilians in Idlib. Many are rallying to help the rebels by cooking food for them, digging trenches, filling sand bags, donating money, providing tires to burn for makeshift air cover…

Civilians in Idlib feel they have no choice but to stand behind the opposition. They believe, probably rightly so, that they will be slaughtered & jailed if the regime takes over. The border with Turkey is locked & smuggling is unaffordable https://t.co/XKSnPz5NqR

Turkey has now reportedly made a firm response to the Russia-regime offensive, including fire on Turkish forces.

Local sources report that the Turkish military are trying to establish positions south of Khan Sheikhoun, checking any further advance by Russia and the regime along the M5 highway. The operation was preceded by Turkish drone flights over the area.

However, the effort has been impeded by regime shelling north of the “ghost town” (see below).

Apparently a near miss. Syrian regime forces have shown no hesitancy to fire at (and kill) Turkish military units assigned to observe the ceasefire. https://t.co/SCwsFbg6ka

The regime’s military have fired several times on the Turkish observation posts around Idlib and northern Hama Provinces, injuring Ankara’s troops who were trying to enforce the now-shattered demilitarized zone. President Recep Tayyip Erdoğan warned in June that the shelling must stop, but he and his officials have been silent about the current Russia-regime operations.

ORIGINAL ENTRY: Russia and the Assad regime have launched their assault to capture the “ghost town” of Khan Sheikhoun in northwest Syria, devastated and emptied by months of bombing and shelling.

Both pro-Assad and opposition activists reported the start of the attack early this morning, after the pro-Assad offensive seized a nearby checkpoint. Two suicide vehicle bombs tried to check the assault, and the major general heading the regime’s 3rd Corps has been wounded.

Khan Sheikhoun is in southern Idlib Province, on the M5 highway between Aleppo and Homs. Despite a demilitarized zone declared by Russia and Turkey last September, it was regularly shelled by regime forces. Then, when the Russia-regime offensive shattered the zone in late April, Khan Sheikhoun was one of the focal points for bombing, with almost 1,200 raids through July. Almost all of the town’s 90,000 people fled, moving towards the Turkish border.

The town was also the target of an Assad regime sarin attack in April 2017, killing about 90 people and injuring hundreds.

Local council member Abdul Majeed Sarmani said only about 50 families remain, “forced to sta, because they cannot bear the burden of displacement [with no] money to rent houses on the border”.

One of those left, Mu’ayyad, told Syria Direct, “The barbaric shelling of the area has [led to] the erasure of the city of Khan Sheikhoun from the map because no stone remains in place.”

The regime of Assad and the Russians are trying to avenge and erase features of the city and any evidence against Assad in the future, in the event of the international courts for accountability.

The Russia-regime offensive resurged earlier this month after it was stalled since mid-May by rebels and the Islamist bloc Hay’at Tahrir al-Sham. A series of villages were captured in northwest Hama and southern Idlib Province on the way to Khan Sheikhoun.

The assault is hoping not only to hold a position on the M5 highway, but also to cut off anti-Assad forces in northern Hama Province from those in Idlib. One of Turkey’s 12 observation posts, which were meant to enforce the demilitarized zone, will be isolated; however, Ankara — whose forces have been alongside rebels in northwest Syria since August 2016 — has said little about the Russia-regime attacks in the past month.

Since the launch of the offensive, the Russian-regime bombing and shelling has killed more than 750 civilians, wounded thousands, and displaced more than 500,000. Almost 40 medical facilities and scores of bakeries, markets, and other civilian sites have been targeted.

The area hosts about 3 million people — 20% of Syria’s remaining population.

See Syria Daily, August 16: A Massacre of the Innocents in Idlib