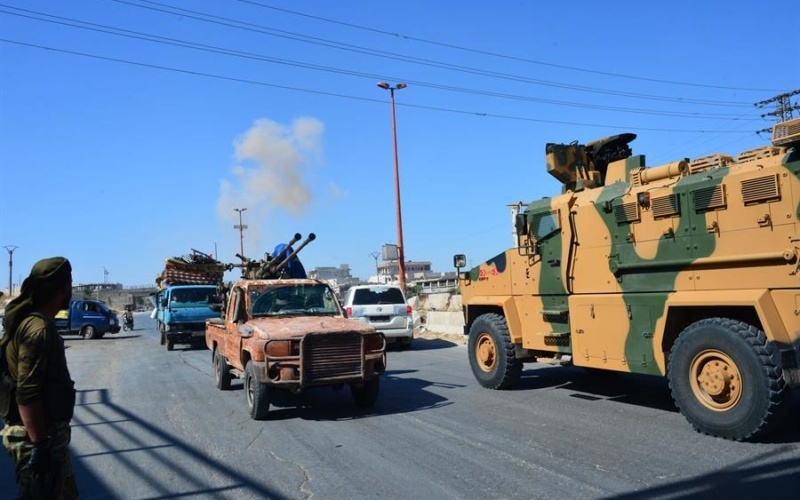 Reports of a retreat by anti-Assad forces in northern Hama Province and south of Khan Sheikhoun in southern Idlib Province may be premature.

The Islamist bloc of Hay’at Tahrir al-Sham has denied a withdrawal:

Correction:
The Mujahideen of Hayat Tahrir Sham are still in Latamnah, Kafr Zayta and Morek and the areas are still under the full control of the Mujahideen.

A statement said that fighters were taking up positions near the town, almost deserted after the flight of its 90,000 population from Russia-regime attacks.

“After fierce bombardment by the criminal enemy that avoids direct confrontation with holy warriors by implementing a scorched earth policy, our fighters have redeployed south of Khan Sheikhoun,” the statement said.

Rebels are also reportedly retreating in northern Hama, giving up towns like Lataminah, and groups around the Turkish observation post.

Journalist Riam Dalati says the Assad regime’s military has surrounded the post, while Russia has offered to escort Ankara’s troops out of the area into Turkish-controlled territory closer to the border.

Footage shows a band of exhausted rebels in #Kafarzita, N. #Hama, saying they were being surrounded, #SAA has overview of their positions. pic.twitter.com/zeSc2vuAjQ

Local pro-opposition sources report that the area south of Khan Sheikhoun, across southern Idlib and northern Hama Province, has been evacuated.

The retreat cuts off Turkish-supported rebels in northern Hama and the Turkish observation post at Morek on the M5 highway.

A Turkish convoy was blocked by Russian and regime bombing from establishing positions south of Khan Sheikhoun on Monday.

ORIGINAL ENTRY: Turkey has made its first significant intervention against a Russia-regime offensive in northwest Syria, but it is unclear if Ankara will check the advance seizing part of the last major opposition area in the country.

With Assad forces — enabled by intense Russian airstrikes — moving on the “ghost town of Khan Sheikhoun”, a Turkish convoy of 28 vehicles travelled across Idlib Province to establish two military positions south of the town. The regime’s military responded by shelling the convoy, including seven tanks, six loaders, and trucks with ammunition, north of Khan Sheikhoun.

With the convoy halted by further Russian-regime attacks on the M5 highway between Aleppo and Homs — one local source called the bombing “unbelievable” — the Turkish force could not reach Khan Sheikhoun. Nor could it support the Turkish observation post at Morek in northern Hama Province, threatened with cut-off by the pro-Assad advance.

The Russia-regime offensive began in late April, shattering a demilitarized zone declared by Moscow and Turkey last September. Turkey, whose military has been alongside rebels in northwest Syria since August 2016, provided some weapons to the National Liberation Force as the offensive stalled between mid-May and the start of this month.

However, the anti-Assad resistance finally gave way three weeks ago, and the Russian-enabled regime troops have moved across northwest Hama Province into southern Idlib. The capture of Khan Sheikhoun would secure a position on the M5 highway, and also move towards a separation of anti-Assad forces in Hama from those in Idlib.

Khan Sheikhoun had about 90,000 residents, many of them displaced from other areas of Syria. However, months of regime and Russian shelling and bombing have emptied the town to about 50 families.

Turkey: “Prevent Recurrence of Such Incidents”

Turkish Recep Tayyip Erdoğan warned in June that the offensive would cause a further refugee crisis, with 3.6 million Syrians already in Turkey, and he told the Assad regime to halt occasional attacks on the 12 Turkish observation posts trying to enforce the demilitarized zone.

However, Turkey proceeded at the start of August with the 13th round of talks with Russia and Iran in the Kazakh capital Astana, which ostensibly have sought a resolution of the 101-month conflict. Days later, Russia stepped up its bombing of both anti-Assad forces and civilians — almost 900 of whom have been killed since late April, thousands wounded, and more than 500,000 displaced — burying any figment of a political process.

Erdoğan was silent over Monday’s developments, but the Turkish Defense Ministry challenged Moscow, “We expect the necessary measures to be taken to prevent recurrence of such incidents.”

However, Russian President Vladimir Putin immediately declared that there would be no halt to attacks across Idlib and northern Hama: “We support efforts of the Syrian army which is conducting local operations to neutralize these terrorist threats.”

Speaking at a joint press conference with French President Emmanuel Macron, Putin made no comment about the bombing of the Turkish military convoy or the assaults on civilians.

The Assad regime’s Foreign Ministry implicitly justified the attack on the convoy, falsely claiming that it was “to help the defeated terrorists of Jabhat al-Nusra”.

Ankara backs the National Liberation Front and National Army. Both are opposed to the Islamist bloc Hay’at Tahrir al-Sham, which succeeded Jabhat al-Nusra, although the groups are approaching military co-operation against the offensive.

Meanwhile, rescuers said 12 more civilians were slain on Monday by the Russian-regime bombardment.

A demonstration on Monday night in support of Khan Sheikhoun: