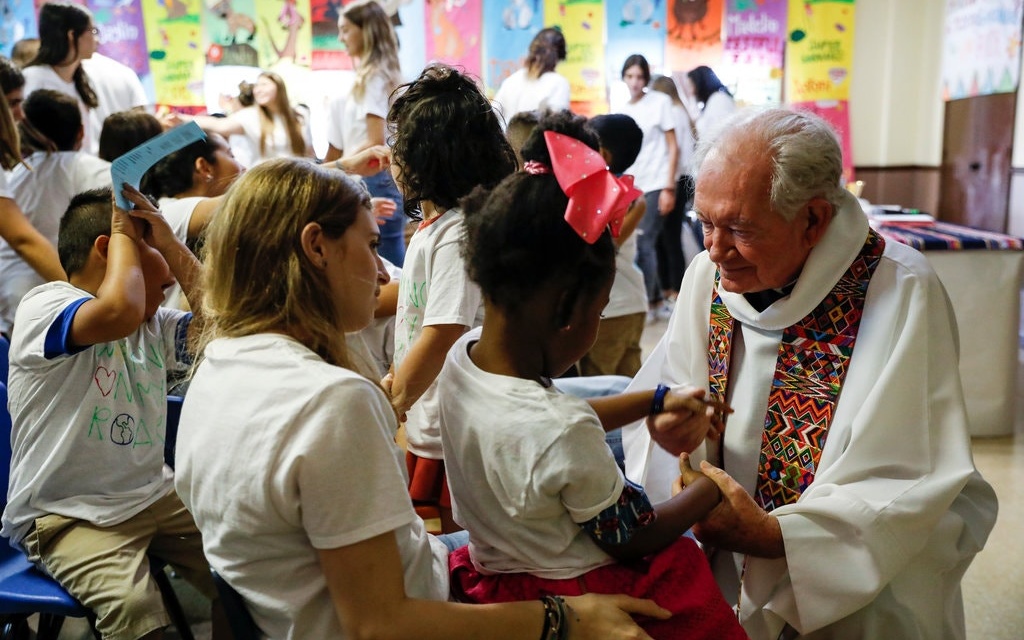 Rev. Frank O’Loughlin with immigrants in Lake Worth, Florida, before news of a delay in deportation raids (Eve Edelheit/New York Times)

Donald Trump has delayed his plan for nationwide raids to deport “millions” of undocumented immigrants, while threatening to implement them in two weeks.

Immigration and Customs Enforcement agents were planning to sweep through immigrant communities in 10 major cities on Sunday. Officials said on Friday that they would target about 2,000 families in a show of force.

In a Saturday tweet, Trump tried to put the burden on Democrats, demanding changes in the legal right of migrants to claim asylum in the US.

At the request of Democrats, I have delayed the Illegal Immigration Removal Process (Deportation) for two weeks to see if the Democrats and Republicans can get together and work out a solution to the Asylum and Loophole problems at the Southern Border. If not, Deportations start!

But another reason for the delay appeared to be the concern of Homeland Security officials, including Acting Director Kevin McAleenan, that the raids would result in another forcible separation of immigrant children from their parents.

In a meeting with White House officials on Friday, McAleenan repeated his objection and said he could achieve similar numbers with a measured, four-week deportation plan.

Last June, under its “zero tolerance” policy, the Administration oversaw the seizure of almost 3,000 children, detaining them hundreds and even thousands of miles away from parents. Courts ordered a halt to the practice, but some children — with parents deported — may not be reunited for up to two years.

Meanwhile, activists and Democratic legislators called for a halt to the operations. House Speaker Nancy Pelosi called the raids “heartless” and urged Mr. Trump to “stop this brutal action”.

On Friday night, Pelosi called Trump on Friday evening to seek a cancellation of the raids, “according to a person familiar with the conversation”. Trump said he would consider doing so but made no commitments, the source summarized.

Congress has been considering a measure to send $4.5 billion in humanitarian aid to the border. Some Democrats, including members of the Congressional Hispanic Caucus, said they will withhold support in a House vote this week, in protest of Trump’s immigration policies.

The Senate has reached a bipartisan deal on a similar bill, but Democrats have said none of the money must go toward Trump’s raids.

On Monday, a day before the official launch of his 2020 re-election campaign, Trump issued his threat:

Next week ICE will begin the process of removing the millions of illegal aliens who have illicitly found their way into the United States. They will be removed as fast as they come in. Mexico, using their strong immigration laws, is doing a very good job of stopping people…….

With the anti-immigrant theme a key part of his run for a second term, in recent months Trump has shut down the Government for a record-setting 35 days and then declared a “national emergency” to get money for his Wall with Mexico. He has said he will close the entire US-Mexico border, and then promised the imposition of tariffs on the Mexicans unless they hold all migrants seeking to come to the US.

“We Didn’t Plan to Go Out All Week”

Undocumented immigrants, some of whom had gone underground, reacted with relief and uncertainty.

“My family was shopping for the whole week today. We didn’t plan to go out all week,” said Jessi Zavala, 23, the American child of an undocumented Nicaraguan mother, as she worked at a thrift store.

Candi Vasquez, 13, born in Florida to undocumented parents, said she and her 8-year-old brother were still frightened: “I am kind of happy. But if it happens in two weeks I am still scared. I don’t want to lose my mom.”

In Lake Worth, Florida, Rev. Frank O’Loughlin, who runs the Guatemalan-Maya Center, told immigrants on Saturday morning, “A lot of people are scared today. Let everything else go. You and your children are here.”

Later, after hearing of the postponement of the raids, he said, “Wow. We are at the end of a yo-yo string. It’s incomprehensible.”