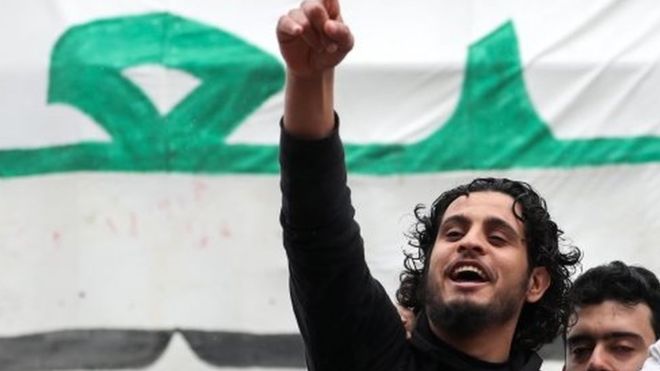 Abdul-Baset Sarout, the “Singer of Syria’s Revolution”, died on Saturday from wounds suffered in fighting in northwest Syria (AFP/Getty)

Frontlines have settled in northwest Syria, after a rebel counter-attack that regained territory lost to a month-long Russian-regime offensive.

The rebels are also putting pressure on the village of Jalmeh and on the town of Kafr Naboudah (see map), which the Russian-regime offensive captured soon after it was launched on May 6.

Russian-regime forces were able to regain one village, Kafr Houd, after the initial rebel attacks but have failed to retake others such as Jibeen. They are holding out in the town of Kernaz, south of Kafr Naboudah.

The Russian-regime offensive shattered a demilitarized zone declared by Moscow and Turkey last September, covering northern Hama and Idlib Provinces. The assault initially seized several towns in northwest Hama Province. However, it was soon held up by the counter-attacks.

With its offensive now turned into defense, regime media concentrated on putting out dramatic headlines of supposed success. State news agency SANA said the regime military was “inflicting heavy losses upon [‘terrorists’] in personnel and equipment”, without mentioning the failure to regain Tal Maleh.

The pro-Assad blog declared another attempt to storm Tal Maleh on Sunday, “led by the Tiger Forces and their commander Major General Suheil Al-Hassan”.

There has been no confirmation of the rebel death toll, and the regime’s claim was undermined by pro-Assad accounts circulated fake photographs — which actually were of Islamic State fighters in 2014 — of the casualties.

Rebels have not put out a declaration of regime forces killed, but pro-Assad blogs have acknowledged more than 50 deaths.

There was confirmation of the death of a prominent revolutionary figure, former national football Abdul Baset al-Sarout.

Abdul Baset Sarout, a big loss to the ummah. We tried our best to save him in our medical point in hama. Sadly he died two days later in ICU. We ask Allah to accept him as shaheed in the highest level of heaven. Ameen. pic.twitter.com/outjWWpCxR

Sarout was prominent as the “singer of the Revolution” as he led protests and chants in the uprising before organizing local men in Homs to take up arms.

Four of his brothers and his father were killed in the fighting, with Sarout — wounded several times — holding out until the surrender of most of opposition Homs in 2014.

In 2016, EA published an hour-long interview with Sarout about the Homs uprising, his decision to fight, and the battle to clear his name over charges that he supported the Islamic State.

Recent video of Sarut from the northern Hama countryside, pulverized by Assad & Russia. He sings "in the path of God, we will go on struggling. We are returning, oh Homs, by the will of God" https://t.co/5pUdIjdPCU