Is Spring Coming to UK with End of May? 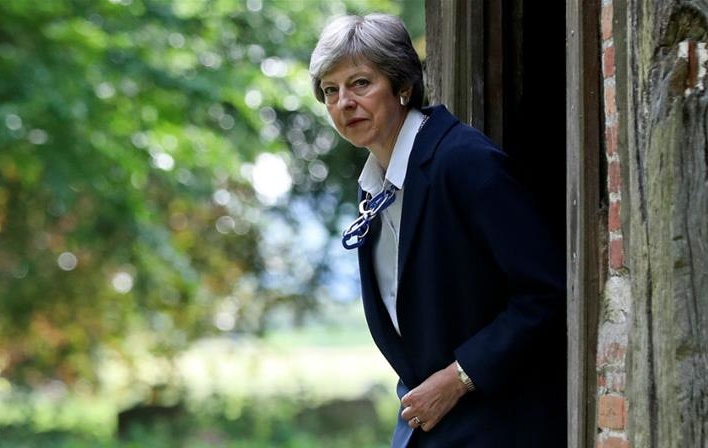 “Theresa May’s gift to the UK is a doubtful future.” (Simon Dawson/Reuters)

British Prime Minister Theresa May has retired as Leader of the Conservatives, marking the official start of the Party’s leadership contest (which has been running for most of her tenure). May must rank as the weakest incumbent Prime Minister of modern times, and the one with fewest visible achievements in office.

Given the crisis she was left by her predecessor and the chaos which may well follow, she might share the aspiration of Paul Eddington, the actor who occupied her position in the TV show Yes Prime Minister – that his epitaph would be “He did little harm.” But Britain’s unprecedented condition called for more ambition.

May was dealt a tough hand, but she swapped her cards for worse ones and then played them unwisely. In the immediate wake of the 2016 Brexit referendum, she assumed the Conservative leadership without a full contest after competitors withdrew. Like Labour’s Prime Minister Gordon Brown before her, this gave May a superficial impression of universal appeal, but a fundamental lack of authority. Though she had campaigned cautiously for Remain, she accepted the referendum result with the hollow tautology of “Brexit means Brexit”. If this was a knowing avoidance of the multiple forms which Brexit could take, the May premiership never acknowledged that.

May’s second error was to rush to trigger Article 50 of the Lisbon Treaty early. This measure set the clock ticking on Brexit and placed the political system under unbearable pressure. It also sparked a legal case which the government lost over whether Parliament’s approval was required to carry the decision. It can be said that May had the support of the Labour Party in this, but two wrongs don’t make a right and it was May as prime minister who led the process.

May’s third and most serious misjudgment, for which she later apologized to her own party, was to call a general election in June 2017 and to make her own “strong and stable” leadership the focus of the campaign. Starting with a poll lead of more than 20 points, the Conservative press anticipated “Blue Murder” (The Sun) in which May would “Crush the Saboteurs” (Daily Mail, though curiously borrowed from Lenin).

In the event, May’s campaign collapsed as her personal appeal failed after she refused to take part in TV debates and radical policy proposals on social care unraveled under public scrutiny. May lost David Cameron’s slim Commons majority of 12 and had to enter into a £1 billion deal with the Democratic Unionist Party in Northern Ireland to stay in office — after threatening that a vote for Labour jeopardized single-party government and that there was “no money tree” to draw upon.

Fourthly the Prime Minister mismanaged the difficult situation in which she had placed herself. Prime ministers with no Parliamentary majority – James Callaghan or John Major, for example – have been masters of pragmatism and realpolitik. All of those who worked with May knew her as a personality stubbornly set on her own opinion, a trait which became writ large on the government.

Conservative ministers, feeling excluded from Brexit negotiations, resigned in unprecedented numbers (36 in three years where it took the Blair Government a decade to reach 29). At the highest level, with two Brexit Secretaries and a Foreign Secretary walked the plank at key moments because they felt out of the loop.

Hardline Brexiters in the Commons three times defeated May’s attempt to push through the deal she had agreed with the European Commission. Conservative MPs voted by a 2-to-1 margin in December 2018 to keep May as leader, only proving that most did not really want her in office. A belated attempt to engage the Opposition parties foundered when it became clear that no real concessions were on offer.

Most prime ministers are remembered for one major action, whether by friends or foes: Harold Wilson’s Open University; Edward Heath’s Three-Day Week; James Callaghan’s Winter of Discontent; Margaret Thatcher’s Poll Tax; John Major’s ERM fiasco; Tony Blair’s Iraq; and Gordon Brown’s banking crisis. May will be unusual for being characterized by inaction: the failure to achieve her single aim. The electorate’s testimonial was to award her Party a historically unprecedented 9% at the European elections last month.

May’s gift to the UK is a doubtful future. The nation is politically divided three ways rather than two – between Liberal Democrats and Greens for Remain; the nationalist resisters of Brexit and Nigel Farage’s Brexit Party favoring No Deal; and the division and ambiguity of the “main” parties.

Parliament and May’s own party remain fatally divided. Any likely Conservative leader faces the same challenges with which May started and with the problems which she added. Only by breaking with party politics can any successor escape the dilemma of Brexit.

The premiership of 2016 was not a job for an ordinary prime minister, and yet Britain got one. It will take a rare personality to reach across the Brexit divide, but we may never see that personality.