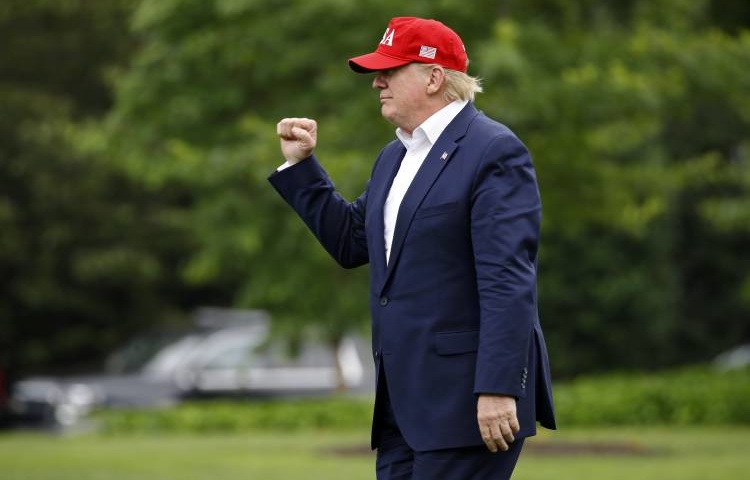 Donald Trump on the White House South Lawn after his return from Europe, June 7, 2019 (Patrick Semansky/AP)

Mexico agreed between December and March to deals with the US on migrants, months before Donald Trump’s tariffs threat and his proclamation of victory.

On Friday, Trump called off the tariffs — set at 5% with a potential to rise to 25% — after Mexico confirmed limited measures following talks with Vice President Mike Pence and Secretary of State Mike Pompeo.

The Mexican delegation, led by Foreign Minister Marcelo Ebrard, said that they will deploy National Guard personnel throughout the country to check migrants from reaching the US border, and that they will accept an expansion of a Trump Administration program for some migrants to wait in Mexico while asylum claims are heard in the US.

But “officials from both countries who are familiar with the negotiations” said Mexico had already pledged to take the steps in March, during secret talks in Miami between Homeland Security Director Kirstjen Nielsen and Mexican Interior Secretary Olga Sanchez.

The expansion of the program over asylum-seekers was agreed in December. Nielsen announced the Migrant Protection Protocols during a hearing of the House Judiciary Committee on December 20.

Meanwhile, Mexico is continuing to reject the Administration’s demand that it declare itself a “safe third country”, requiring that migrants seek asylum in the first foreign country they enter after leaving their homes.

The Mexicans, with about 8,000 migrants currently waiting in the country, are concerned that the provision would sharply increase the long-term number, straining resources and the economy.

The revelation of the December and March agreements buttresses EA’s analysis, published on Friday, that Trump would “obscure failure to check the movement of migrants with a declaration of satisfaction with Mexico’s response”.

Staking out an anti-immigrant theme for his 2020 re-election campaign, Trump persisted on Saturday:

Everyone very excited about the new deal with Mexico!

Trump also lied that under Friday’s agreement — which is solely about migration and has no trade provisions — would “MEXICO HAS AGREED TO IMMEDIATELY BEGIN BUYING LARGE QUANTITIES OF AGRICULTURAL PRODUCT FROM OUR GREAT PATRIOT FARMERS!”

In fact, Trump’s closest advisors — including son-in-law Jared Kushner, Treasury Secretary Steven Mnuchin, and Trade Representative Robert Lighthizer — warned that tariffs would threaten US exports to Mexico, as well as raising the cost to manufacturers and consumers of Mexican products.

The advisors said the duties would threaten Congressional ratification of a revised North American Free Trade Agreement. But Trump overruled them to announced his intended tariffs just over a week ago.

Trump began to back away, while in Europe this week, as economists, manufacturers, and representatives of farm, business, and consumer organizations warned of economic damage. Republican Senators threatened a rare rebellion, considering nullification of Trump’s “national emergency” — invoked in February for his Wall with Mexico and also the basis for the tariffs.

As Mexican Foreign Minister Ebrard began talks in Washington last Sunday, Mexico gave cover for Trump with the announcement that they could deploy up to 6,000 National Guard troops. It also looked to an acceleration of implementation of the Migrant Protection Protocols.

US officials are sceptical whether the steps will reduce the flow of migrants through Mexico. The Protocols already are being challenged in courts by immigrant rights groups, who say they violate the migrants’ right to lawyers.

During a phone call Friday evening, as he returned from Europe, Trump asked lawyers, diplomats, and immigration officials if they thought the deal would work.Aides said yes, but that the rise in migration — which had dropped year-on-year for two decades, but has surged since Trump took office and especially after his “zero tolerance” policy was announced in April 2018 — might continue.

Trump said, “We’ll see if it works,” and put out his tweet announcing the agreement.