Syria Daily: Will Trump Be Pulled Back from US Withdrawal? 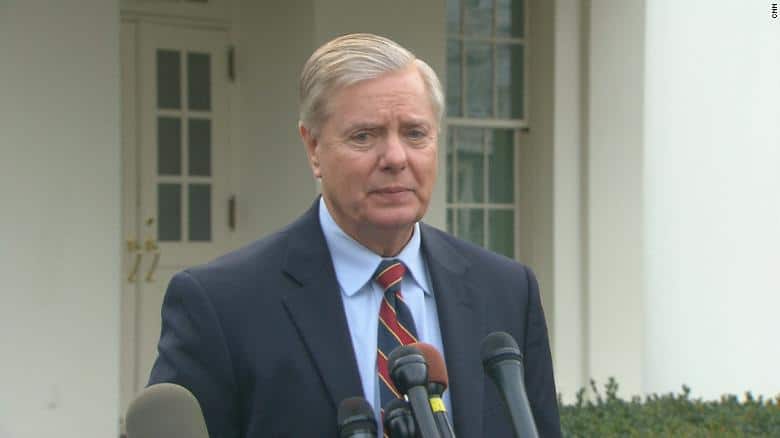 Senator Lindsey Graham speaks to reporters outside the White House after lunch with Donald Trump, December 30, 2018

In a sign that US agencies may pull Donald Trump back from full US withdrawal from Syria, Senator Lindsey Graham has said Washington is in a “pause situation”.

Graham opposes Trump’s snap decision, made during a phone call with Turkish President Recep Tayyip Erdoğan, for the departure of all 2,000 American personnel. However, he is a close friend of Trump’s and a fervent supporter on almost all issues.

The Senator said after a Sunday lunch with Trump, also attended by the chairman of the Joint Chiefs of Staff, Gen. Joseph Dunford:

I think we’re in a pause situation where we are re-evaluating what’s the best way to achieve the president’s objective of having people pay more and do more….

I think we’re slowing things down in a smart way….The goal has always been the same. To be able to leave Syria and make sure ISIS never comes back.

Graham’s statement referred to Trump’s overriding valuation of the US deployment in Syria as spending of money. Trump has repeatedly said that he is persuading others, notably Saudi Arabia, to assume the cost. Riyadh has rejected Trump’s claim that it is taking over US commitments at a price of $4 billion.

Reports initially said that Trump, after his December 19 announcement of the withdrawal, gave the Pentagon 30 days to fulfil the order.

But US officials have indicated, that amid the resignation of Defense Secretary Jim Mattis and US envoy Brett McGurk over Trump’s impulsive command, they will take longer than a month. Pentagon officials have spoken about 60 to 100 days.

The US military and other American agencies are opposed to the abandonment of the Kurdish-led Syrian Democratic Forces, created by Washington in October 2015 to push back the Islamic State.

Kurdish groups hold about 27% of Syria, much of it territory in the north taken from ISIS, but they are vulnerable to attacks from both a Turkey-rebel alliance and pro-Assad forces if the US departs.

The situation has already been highlighted by the scramble for Manbij in Aleppo Province, at the western edge of the Kurdish-held territory. The SDF, fearing a Turkish-rebel assault, is in talks with the Assad regime about handing over control of the town. Meanwhile, the US still holds positions to the northeast of Manbij.

Graham said in a televised interview, before the lunch, “If we leave now, the Kurds are going to get slaughtered. The president is reconsidering how we do this [the withdrawal].”

“He Promised to Destroy ISIS”

The Pentagon also fears a resurgence of the Islamic State, which has been reduced to small pockets of territory in eastern Syria, if the US leaves.

Trump’s whimsical decision was prompted, during his December 14 call with Erdoğan, by the Turkish President’s assurance that ISIS is “99% defeated”.

Turkey’s priority is “erasure” of the “terrorist” YPG, the Kurdish militia that is the leading faction is in the SDF. Ankara considers the YPG to be part of the Turkish Kurdish insurgency PKK.

Graham indicated on Sunday that Trump is backing away from his view of no need for US forces to remain in Syria because of ISIS:

We talked about Syria and he told me some things that I didn’t know that make me feel a lot better about where we’re headed in Syria.

He promised to destroy ISIS. He’s going to keep that promise. We’re not there yet, but as I said today, we’re inside the 10-yard line and the President understands the need to finish the job.

Graham also spoke aobut the Pentagon’s wider objective of remaining in Syria to counter Iran’s position as an essential military and political ally of the Assad regime:

[Trump is] worried about Iranian influence and the potential dangers to Israel from having a superhighway from Beirut to Tehran in terms of delivering weapons into Lebanon, and he’ll be talking to Turkey about making sure we don’t have a war between the Turks and our allies the Kurds.