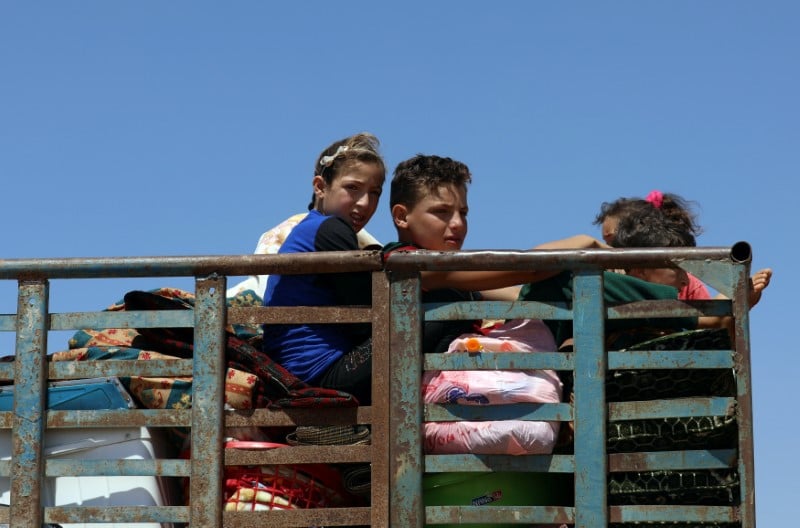 UPDATE 1000 GMT: Rebels say they have repelled a pro-Assad effort to advance on a front cutting off the town of Lajat (see map).

However, pro-Assad units have been able to take the village of Shamorah (see map), their first advance since launching attacks on Tuesday.

The Daraa local council has declared the eastern part of the province a “disaster zone” because of the pro-Assad attacks and has called on the “international community to stand for its responsibility and stop this holocaust”.

The UN has called on the Assad regime to halt its bombardment of southern Syria, pulling back from any offensive on the opposition area.

UN Secretary-General Antonio Guterres demanded an immediate end to the pro-Assad attacks which have been stepped up since Monday, particularly on eastern Daraa Province. He said he is “concerned at the significant risks these offensives pose to regional security”.

The US added its fourth warning since late May, and third in a week. UN Ambassdador Nikki Haley, noting that more than 11,000 people have been displaced already, said the shelling and bombing “unambiguously violates” a de-escalation zone proclaimed by the US and Russia last July. She said to Moscow, “Russia will ultimately bear responsibility for any further escalations in ‎Syria.”

The pro-opposition site Nedaa Syria also said that the US had informed the rebel Southern Front that it was seeking to maintain a ceasefire through diplomatic channels.

But rebel officials said the statements were having no apparent effect on the regime. They reported the first barrel bombing of the south in more than a year on Friday, with at least a dozen bombs dropped by helicopters on three towns and villages in the Busra al-Harir area, northeast of Daraa city.

The Assad regime’s media continued to frame the bombardment as a justified exception to de-escalation, saying it is on “lairs and movements of terrorists”.

The Assad regime has looked towards the reoccupation of Quneitra and Daraa Provinces, where the Syrian uprising began in March 2011, since it reclaimed East Ghouta near Damascus in April. Bashar al-Assad has asserted that the military will regain “every inch” of the country.

Israel has warned that it will intervene against any offensive including Hezbollah and Iranian-led foreign militia in the area near the Israeli-occupied Golan Heights. After discussions with the Israelis, Russian Foreign Minister Sergey Lavrov said all “non-Syrian forces” must leave the area and suggested a political process for rebel withdrawal.

The Assad regime’s military has not made a significant advance since 2012 without Iranian-backed forces on the ground and Russian airpower. But opposition activists warn that Hezbollah and Iranian-backed militia may disguise themselves within the regime forces, and Russia — while not carrying out any operations so far — has broken other de-escalation zones, notably in East Ghouta and in parts of northwest Syria.

Russia’s Ambassador to Lebanon, Alexander Zasypkin, reportedly indicated that Moscow could set aside the southern de-escalation zone. He was quoted by the pro-Hezbollah newspaper al-Akhbar:

The Syrian army now, with support from Russian forces, is recovering its land in the south and restoring the authority of the Syrian state. Israel has no justification to carry out any action that obstructs the fight against terrorism.