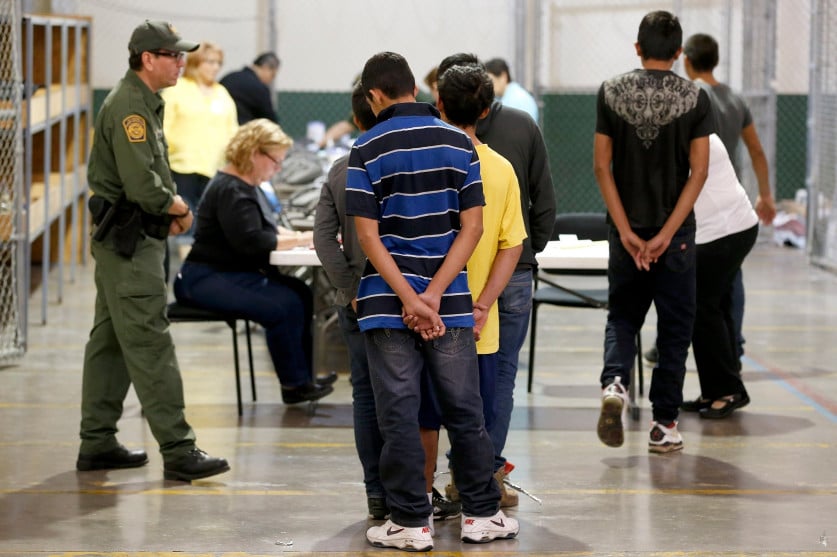 “Human Cost Will Be Great”

The Trump Administration presses ahead with a policy to separate undocumented immigrant children from their parents at the US border — even as almost 1,500 juveniles have been “lost” in the system.

Earlier this month, under pressure from Donald Trump, Attorney General Jeff Sessions announced a goal to criminally prosecute all people crossing the border without documents. Those charged with improper entry, even though it is a misdemeanor on the first infraction, are imprisoned and separated from their children.

The Obama Administration had instituted a policy in 2014 that most parents be allowed to remain with their children in family shelters while awaiting asylum cases or deportation proceedings.

But Trump has demanded, along with The Wall with Mexico, that separation be pursued. Earlier this month, he berated Homeland Security Director Kirstjen Nielsen at a Cabinet meeting, to the point where she reportedly considered resignation.

Even before Sessions’ confirmation of the demand for 100% prosecutions, authorities were splitting families. From October 2017 to mid-April, more than 700 children were reportedly separated from their parents. One public defender in McAllen, Texas said that, compared to one or two cases a week in the town of McAllen, there were 33 last week.

The policy is being pursued despite the “loss” of children in the system. The Office of Refugee Resettlement said at the end of 2017 that of more than 7,000 unaccompanied minors placed with sponsored individuals, the agency did not know where 1,475 of them were.

The revelation has raised concern that some of the children may have been released to human traffickers.

Maureen Franco, a federal public defender for the Western District of Texas, spoke of the effect of the Administration’s tougher line:

One of my lawyers came back from meeting his new client at the jail — and this is a very experienced criminal defense lawyer — who was shaken by the experience of talking to a parent whose child was literally ripped from their arms.

The human cost of this will be great.

Karen Hernandez, a mother of a 13-year-old son and 8-year-old daughter, spoke of her fear after being detaained for five days: “I was afraid they’d come and take my children. They had said the laws are going to change and they are going to separate the mothers from their children.”

But Hernandez was “lucky”: because she was held just before Sessions’ order reached local officials, she released on May 10 with an electronic bracelet on her ankle and her children at her side as they were placed in a local shelter.

Some parents who are now being separated from their children are being given yellow bracelets to identify them as “illegal” immigrants.

Journalist Chris Hayes posts a court record of a mother pleading to be reunited with her son:

“My son was crying as I put him in the seat. I did not even have a chance to try to comfort my son, because the officers slammed the door shut as soon as he was in his seat. I was cry, too. I cry even now when I think about that moment when the border officers took my son away.” pic.twitter.com/2EmdndFIKo

Trump: North Korea Summit May Be Back On Track

His mood swinging wildly over the June 12 summit with North Korean leader Kim Jong-un, Donald Trump says the meeting might be back on track.

On Thursday, Trump sent a letter to Kim postponing the encounter in Singapore, after North Korea’s firm line over its nuclear weapons and missile programs threw the White House into confusion.

But after Pyongyang issued a mild response, Trump said to reporters yesterday, en route to a speech at the US Naval Academy, “It was a very nice statement they put out. We’re talking to them now. They very much want to do it. We’d like to do it. We’ll see what happens.”

Contradicting a “senior White House official”, who told reporters on Thursday that a summit on June 12 is impossible, Trump said, “It could even be the 12th.”

He dismissed his advisors’ concerns that North Korea is manipulating his desire for a historic meeting: “Everybody plays games. You know that.”

We are having very productive talks with North Korea about reinstating the Summit which, if it does happen, will likely remain in Singapore on the same date, June 12th., and, if necessary, will be extended beyond that date.

The White House still plans to send an advance team to Singapore this weekend to work out details for a meeting. The team waited in Singapore for three days last week, but the North Koreans never apepeared.

Some advisors are now arguing for a delay in any meeting while stepping up economic pressure on Pyongyang.

But Trump lawyer Rudy Giuliani predicted the summit will proceed, throwing in a jab at the Trump-Russia investigation of Special Counsel Robert Mueller and its possible questioning of the President: “I think it is more inevitable than a Mueller interview. At least they’re not going to try to trap him into Korean perjury.”

Trump Confirms His Lifting of Sanctions on Top Chinese Company

Donald Trump has confirmed his lifting of sanctions, overruling the Commerce Department, on the leading Chinese company ZTE.

In a tangled tweet on Friday, Trump reiterated his command to remove the seven-year ban on US components for ZTE, China’s second-largest manufacturer of smartphones. The Commerce Department imposed the ban after it found ZTE had been deceptive in its supposed repayment of a $1.3 billion fine for selling technology to Iran and North Korea.

Senator Schumer and Obama Administration let phone company ZTE flourish with no security checks. I closed it down then let it reopen with high level security guarantees, change of management and board, must purchase U.S. parts and pay a $1.3 Billion fine. Dems do nothing….

ZTE had threatened to close, affecting 75,000 employees, after the US imposed the sanctions. Trump said earlier this month that he would lift the penalty, possibly to ensure that a high-level Chinese delegation continued trade talks in Washington.

TrumpWatch, Day 479: Trump Vows to Save Jobs…in China — Here’s Why

The Washington Post says that Chinese leader Xi Jinping personally appealed to Trump to intervene and allow the company to continue operating, with Trump replying that he would as a personal favor.

Another incentive might be China’s granting of more trademarks to the businesses of Trump’s daughter Ivanka.

On May 7, the Ivanka Trump lines received “registration” approval for five trademark applications, a day after another received “first trial” approval. The permissions, applied for in March 2017, cover goods such as bath mats, textiles, and baby blankets.

Trump’s initial announcement over ZTE was made on May 13, three days after the Chinese government agreed to loan $500 million to a project in Indonesia in which the Trump Organization is a partner.

For administration this is about right penalty for #ZTE violating sanctions. For me its about #China stealing tech & IP to catch up to & surpass us. They are not going to stop until they face significant consequences. Such as ZTE going out of business https://t.co/f4e6jIzjQL

Past administrations of both parties have argued for modernization of Civil Service rules, but Trump has focused on changes provoking sharp partisan divisions. He has been bolstered Republican victories against public employee unions in recent years at the state level and a rollback of Obama-era policies favorable to labor at the federal level.

The first order makes it easier to fire and discipline federal employees. The administration claimed that it frequently takes six months to a year to dismiss poorly performing personnel, followed by an appeals period averaging eight months.

The revised process gives poor performers only 30 days to demonstrate improvement, rather than the current limit of up to 120 days.

The second order directs federal agencies to renegotiate contracts with unions representing government employees so as to reduce waste, while the third hopes to cut down on “official time”, in which government workers who have roles in the union are allowed to perform them roles during normal working hours. That time will now be limited to 25% of hours during the year.

Administration officials asserted that some federal employees had been able to spend all of their duty hours on union business, and that at least $100 million a year would be saved.

Beyond the mantra of making agencies more efficient and responsive, Trump allies have pointed to an ideological battle for the “right” staff. Newt Gingrich, the former House Speaker, said last year:

Should the elected president of the United States have the ability to control the bureaucracy that actively opposed him?

The Supreme Court will soon rule on a case that could end mandatory fees for public-sector unions in more than 20 states.

Trump’s 6 Falsehoods About Military in 2 Minutes

In a speech to Navy cadets, Donald Trump puts out six falsehoods about the US military in two minutes.

Among the distortions and lies:

1. The declaration, “We got you a big pay increase. First time in over 10 years.”

2. “We have now the lowest number of ships that we’ve had since World War I, and very soon you’re going to get to 355 beautiful ships. 355. That’s almost a couple of hundred more ships.”

The Navy now has 283 ships, which is not the lowest number since World War I: there were 279 in 2007 under the George W. Bush Administration

There will not be 355 “very soon”. Navy plans are to reach 355 in the 2050s, while saying this could happen in the 2030s if there is more expenditure and the normal life of ships is extended.