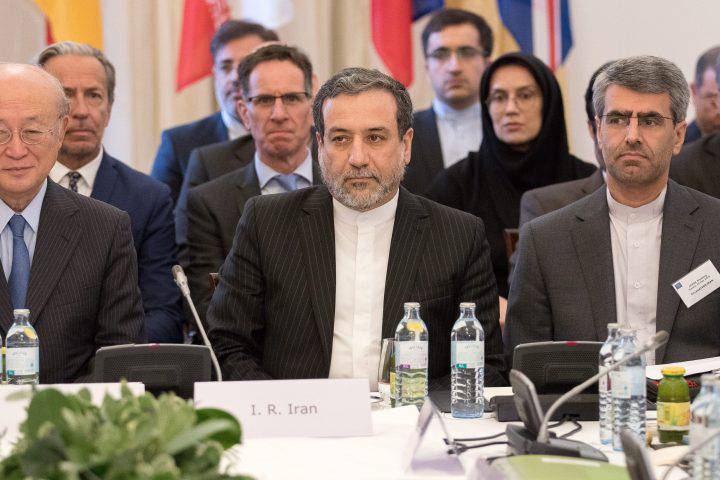 Iran gives Europe a May 31 deadline for economic assurances

Iran has sought European economic and political guarantees for the July 2015 nuclear deal, following US withdrawal, at a meeting in Vienna on Friday.

Iran’s nuclear negotiator Abbas Araqchi led a delegation that discussed the future of the Joint Comprehensive Plan of Action with representatives of the European Union and the three European participants in the agreement — the UK, France, and Germany.

“We are yet to decide whether we will stay in the JCPOA or leave it and this depends on how the other members can compensate one member’s exit,” Araqchi said. “The Europeans must specifically tell us how they can guarantee Iran’s interests in the deal in the absence of the US and its re-imposition of sanctions.”

The Rouhani Government is seeking not only political support but also maintenance and expansion of European trade and investment, necessary for Iran’s fragile economy.

The Supreme Leader and hardliners have pressed the Government, saying that Europe cannot be trusted and must provide “guarantees” of assurances.

Existing US sanctions threaten large fines on any foreign company with American connections which trades and invests in Iran. Donald Trump’s May 8 order of withdrawal expands this to demand withdrawal of any business, including with Iran’s energy and financial sectors, by November.

French energy giant Total has suspended a $4.9 billion investment in the South Pars gas field, the world’s largest. The shipping company Maersk and Germany insurance firms Allianz are among others who have halted operations, and a high-profile January 2016 agreement for France to provide 100 Airbus passenger planes — already halted, except for delivery of a few smaller jets, because of finance issues — is unlikely to be revived.

Araqchi said Friday that the sanctions had been discussed, with consideration of their effects on energy,s the automotive industry, transportation, aviation, banking, and insurance.

He then made Tehran’s demand of the Europeans:

We expect the package to be given to us by the end of May. I’m sorry to say that we haven’t seen the Plan B yet. The Plan B has just started to be figured out….

We have now a deal which is in the intensive care unit, it’s dying.

But Araqchi added a hopeful note, “We are now more confident about preserving JCPOA….All members reiterated that meeting Iran’s demands and normalizing economy cooperation with Iran is necessary.”

#Iran DepFM Araghchi: We feel that Europeans, #Russia & #China are serious… Talks in all levels will continue within next few weeks. After the talks, Iran will decide whether to remain in the #JCPOA or not.

Iranian security forces have prevented a gathering of the Writers Association, the oldest and most prestigious trade union for Iranian writers, on the 50th anniversary of its establishment.

Akbar Massoumbeigi of the Association wrote on social media that security agents “brutally stormed” a member’s house and barricaded the street on Friday. Officers confiscated all posters and memorabilia for the ceremony.

“They fear even a simple gathering at a private home,” wrote another member, Hassan Mortazavi, on his Facebook page.

Last November, security personnel raided a writers’ gathering for a novelist who had died.

In a statement for its 50th anniversary, the Writers Association of Iran proclamied its mission to counter censorship, defend human rights, and organize Iranian writers.