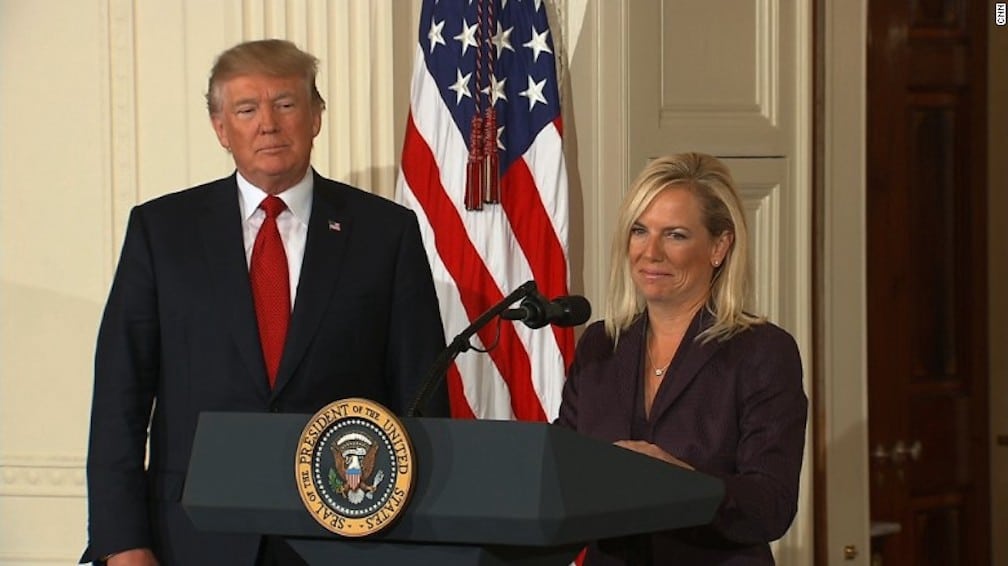 Trump diatribe about “failure to secure US borders”

Homeland Security Secretary Kirstjen Nielsen comes close to quitting after a Donald Trump tirade against her in front of the Cabinet on Wednesday.

Trump berated Nielsen for supposedly failing to secure US border, according to “several current and former officials familiar with the episode”.

Nielsen, who is a protégée of Chief of Staff John Kelly, has drafted a resignation letter but has not submitted it, according to two of the sources.

As Nielsen sat several seats to his left at the meeting, Trump railed at his Cabinet over a purported lack of progress in sealing the border.

“One person familiar with Trump’s blow-up at the meeting” said it was prompted by a discussion about why Mexico was not doing more to prevent illegal border crossings. Trump yelled and said more needed to be done to fix the border. When Cabinet members pointed out that the US relies on day laborers who cross each day, Trump said this is fine, but continued to complain. He also fumed about the continued failure to find a way to build a wall along the 1,900-mile southern border with Mexico.

Trump had told reporters before the session:

We’ve very much toughened up the border, but the laws are horrible. The laws in this country for immigration and illegal immigration are absolutely horrible. And we have to do something about it — not only The Wall, which we’re building sections of wall right now.

“Several officials” said Trump’s anger about immigration has grown in recent weeks. He repeatedly claimed credit for a fall in illegal border crossings in 2017 but they are rising this year, taking away one of his favorite talking points.

Press Secretary Sarah Huckabee Sanders tried to play down the episode on Thursday, “The president is committed to fixing our broken immigration system and our porous borders.”

Nielsen made no reference to a resignation, saying she intended to “continue to direct the department to do all we can to implement the president’s security-focused agenda”. She said Mr. Trump was “rightly frustrated that existing loopholes and the lack of Congressional action have prevented this administration from fully securing the border”.

In early April, Trump repeatedly expressed frustration with Nielsen that Homeland Security is not doing enough to close loopholes allowing illegal immigrants into the country, according to “one official familiar with those discussions”.

Officials presented Trump with a list of proposals to help border agents crack down on those trying to cross the border illegally and send them back more quickly. Trump urged Nielsen to be more aggressive.

One of Trump’s persistent complaints is that Nielsen and other Homeland Security officials are resisting his command that parents be separated from their children when families cross illegally into the US.

On Monday, Justice Department officials announced that border agents will refer all illegal crossings for prosecution, which will most likely result in more family separations.

Donald Trump announces that his meeting with North Korean leader Kim Jong-un will be on June 12 in Singapore.

Consolidating its position of nuclear weapons capability, Pyongyang has offered Trump PR gifts, including Wednesday’s release of three American detainees. At the same time, Kim and Secretary of State Mike Pompeo confirmed the time and location of the summit.

The choice of Singapore is another small victory for Trump’s advisors, who talked the President out of meeting Kim in the Demilitarized Zone between North and South Korea — a far more symbolic, but politically problematic, location.

The highly anticipated meeting between Kim Jong Un and myself will take place in Singapore on June 12th. We will both try to make it a very special moment for World Peace!

Last week, Trump expressed his preference for the Demilitarized Zone: “There’s a great celebration to be had on the site.”

Giuliani Quits Law Firm, Which Criticizes Him Over Trump-Cohen Statements

Donald Trump’s lawyer Rudy Giuliani abruptly resigns from his law firm, which then immediately criticized him over his statements about a $130,000 payoff to Stormy Daniels to silence her about a claimed sexual encounter with Trump in 2006.

Giuliani took a leave of absence last month from Greenberg Traurig to represent Trump. Partners were agitated by a high-profile effort by the lawyer, arranged with Trump and without consultation of others, to try and explain away the hush money from Trump lawyer Michael Cohen to Daniels in October 2016.

The initiative backfired, with Giuliani contradicting Trump’s denial of knowledge of any payoff and then linking the issue to the Trump campaign.

Greenberg Taurig responded to The New York Times after news of Giuliani’s departure:

We cannot speak for Mr. Giuliani with respect to what was intended by his remarks. Speaking for ourselves, we would not condone payments of the nature alleged to have been made or otherwise without the knowledge and direction of a client.

Giuliani laughed when he read the statement, “First of all, I don’t think they really understand what I said.” He claimed that he was referring to the Cohen-Daniels nondisclosure agreement, which was never signed by Trump: “That’s a very common part of a settlement. In fact, any lawyer would negotiate that for a client.”

Later on Thursday, Giuliani said that personnel at the firm had never raised concerns about his comments: “They never brought it up.”

AT&T Paid Cohen For Help on Merger with Time Warner

There are more revelations of payments, totaling almost $3 million, to Donald Trump’s attorney Michael Cohen for assistance — and possible influence — on issues such as AT&T’s proposed merger with Time Warner.

Documents confirm that telecom giant AT&T paid Cohen $600,000 — $50,000 per month for a year — for advice on the $85 billion merger, which required the approval of federal antitrust regulators. Trump had voiced opposition to the merger during the Presidential campaign, and his administration ultimately opposed the AT&T effort. The Justice Department filed suit in November to block the deal.

The AT&T payment, like those of other clients, was made to Essential Consultants LLC, set up by Cohen to pay off Stormy Daniels with $130,000 in October 2016 over her claimed sexual encounter with Trump.

AT&T and the pharmaceutical company Novartis said this week that they provided information about their dealings with Cohen to Special Counsel Robert Mueller last year. Cohen is also under investigation by federal prosecutors in New York for possible bank fraud and campaign finance violations.

Novartis chief executive Vasant Narasimhan sent an e-mail to employees Thursday calling the company’s $1.2 million contract with Cohen a “mistake” and acknowledging that the revelation “was not a good day” for the firm: “We made a mistake in entering into this engagement and, as a consequence, are being criticized by a world that expects more from us.”