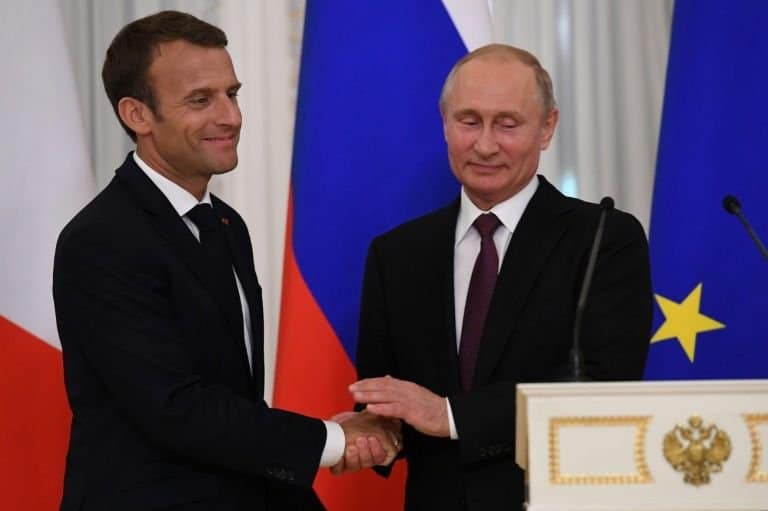 Macron: “We need to be talking about the situation after the war”

France and Russia have discussed a “coordination mechanism” for a political resolution of the seven-year Syrian conflict.

French President Emmanuel Macron announced the initiative on Thursday after talks in St Petersburg with Russian counterpart Vladimir Putin. He said the effort would link the Astana group of Russia, Iran, and Turkey with that of France, the UK, Germany, Jordan, the US, and Saudi Arabia.

“We need to be talking about the situation after the war. The key is to build a stable Syria,” Macron said at a news conference alongside Putin.

The essential backer of the Assad regime, Russia has seized the political lead since 2016, sidelining the US and European powers while enabling the pro-Assad offensives that have regained much of the country.

Macron did not refer to those Russian tactics but said he and Putin had agreed on a quest for a new constitution and elections that will include all Syrians, including more than 6.6 million refugees.

The French leader also said he and Putin had discussed Paris’s desire for an international mechanism to attribute responsibility for chemical weapons attacks.

Putin did not mention the matter.

Russia, which has always denied any nerve agent and chlorine attacks by the Assad regime, used its veto in the UN Security Council last November to end the Joint Investigative Mechanism, the international inspectors who can assign blame for the assaults.

In early April, regime forces carried out another chemical attack on East Ghouta near Damascus, forcing the surrender of the area. Russian propaganda and efforts on the ground restricted an investigation while preventing any attribution of responsibility.

Jaish al-Islam said 22 men were detained at a checkpoint in the village of Maliha on Thursday night, while another 19 were held as they approached the village of Houran from western Sweida Province.

Rebels and pro-opposition activists have accused the Assad regime of moving ISIS personnel into Dara’a for possible involvement in a pro-Assad offensive, following the Islamic State’s capitulation earlier this week in two suburbs south of Damascus.

There are competing claims over the state of the pro-Assad forces and a possible offensive against Dara’a, where the Syrian uprising began in March 2011. Some reports say Iranian personnel and Iranian-led militia have been withdrawn, because of Russian pressure to avoid a confrontation with Israel; however, others from pro-Assad outlets declare that the regime’s best forces are being deployed for an assault.

Pro-opposition activists also say that, despite the withdrawal of some Iranian and Iranian-backed forces — “cosmetics for the eyes of US and Israel” — other Iranian and Hezbollah units are in Dara’a and Quneitra Provinces, “hiding” in regime bases.