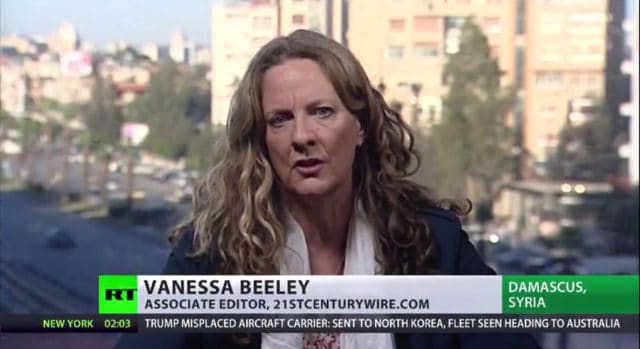 “When you go after the White Helmets, doctors or citizen journalists, it is an attempt to rule out any sources that are incompatible with the pro-Assad Russian authorities”

Jack Barton writes for WikiTribune, with a large contribution from EA:

Since the alleged chemical weapons attack on the rebel-held town of Douma in Syria on April 7′ which provoked military action by the US France, and Britain, multiple theories and narratives have been spread to cast doubt over the entire affair, whether it happened if it did who did it, and more scenarios.

Experts who make it their business to try to independently verify such landmark military events say it has been a challenge to corroborate reports. That uncertainty and the difficulty of obtaining clear data in a war zone have been exploited and misinformation amplified by media and politicians who support the Bashar al-Assad government and have a long record of effective media manipulation.

The western powers used a humanitarian justification for the military action for which they did not seek United Nations Security Council approval — knowing it would be vetoed by Assad’s ally Russia. The attacks targeted suspected chemical weapons stocks and facilities apparently retained after Russia was supposed to have supervised the destruction of all chemical weapons in 2013.

Specialists in disinformation — including those who run independent fact-checking and verification projects, such as EUvsDisinfo — have compared the attempts to obfuscate what happened in the original attack on Douma to elaborate schemes to cloud what happened to former Russian agent Sergey Skripal.

Britain accuses Russia of being behind or creating the conditions for his attempted murder with a nerve agent. Official, quasi-official, and sympathetic Russian media and social media accounts have attempted to sow doubt on the British story suggesting everything from food poisoning to a “false flag” attack by Britain itself.

In the Douma attack Russian state-backed media including RT, Sputnik, and TASS, have promoted alternative theories. Officials have either denied it took place, said it was staged, or said it was perpetrated by allies of Syria’s rebels. Some even suggested Britain had done it to discredit Russia and Syria.

The spreading of extraordinary counter-theories coincided with more measured critics who condemned UK Prime Minister Theresa May, US President Donald Trump, and Emmanuel Macron for acting before it had been proven that a chemical attack took place. Inspectors from the UN-backed Organization for the Prohibition of Chemical Weapons have yet to arrive at the sites of the attacks, following days of known Russian military activity at the locations.

Reports from witnesses on the ground, as well as open-source analysis by independent groups which have a solid record throughout the 7-year conflict in Syria, have backed the initial claims that chemical weapons were used against civilians holed up in tunnels and buildings in a rebel-held area. The affair only reinforces the difficulty of accurately assessing what goes on in a war zone where independent observers — such as western reporters — have been unable to get independent access for some years.

That has left the door open for theories to be spread by pro-Assad factors and also by those who have a political viewpoint that any western intervention is almost by definition bad.

This is an attempt to assemble some of the different narratives on the attack and the justification for the western military action without giving credence to some of the wilder theories.

*France’s Emmanuel Macron said his government has proof chemical weapons were used. France released a report into the attack, finding “with a high degree of confidence that the Syrian regime holds responsibility”.

*Russia has said it has evidence that Britain was involved in arranging a “provocation” in Douma. Its embassy in the UK, along with Foreign Minister Sergey Lavrov, argued the entire attack was staged.

*Russia’s ambassador to the UN Vassily Nebenzia urged the OPCW to establish the truth. The OPCW said on April 16 that Russian and Syrian security forces had not allowed the investigators access to the site of the alleged attack.

*The OPCW has concluded multiple times that the Syrian government used chemical weapons, including in April 2017, when more than 80 people were killed in a rebel-held town.

Sources on the Ground

*The Syrian American Medical Society, a Washington DC-based NGO set up by Syrian-Americans that provides medical relief in several parts of Syria, said it has documented 43 casualties with symptoms consistent with the effects of chlorine poisoning in Douma.

*The Violations Documentation Centre in Syria (VDCS), carried testimonies from doctors who said they had also witnessed the symptoms. (The VDCS is registered in Switzerland but was originally part of a Syrian media NGO shut down by the government. It is a partner of the Open Society Foundations, funded by Hungarian philanthropist George Soros, and the Swiss government.)

*Robert Fisk, a long-term Middle East correspondent for UK newspaper the Independent, is one of the few Western journalists to visit the site. In an article on April 16 he conducted an interview which appeared to cast doubt on whether the attack had actually featured chlorine, but said the doctor he spoke to who raised doubts was not an eyewitness.

*The World Health Organization has said its partners on the ground treated 500 patients “exhibiting signs and symptoms consistent with exposure to toxic chemicals.”

Open-source investigation site Bellingcat — which has a strong track record of getting to the bottom of attacks in Syria and in Ukraine — reported on April 11 that verified video footage showed gas cylinders of a type used in previous chlorine attacks had been used. Bellingcat identified 34 “unique” bodies in verified videos of the aftermath of the attack. The Bellingcat analysis also confirmed two helicopters, similar to those used to drop barrel bombs, flew near the sites at the time.

The Information War Within the War

The Syrian civil war has become “as much a propaganda battle and a presentation as it is a political battle and a military conflict”, Scott Lucas, a Middle East commentator who runs news and analysis site EA Worldview, told WikiTribune.

The propaganda and misinformation in Syria “sharpened” with the 2013 Sarin attacks which were also in the eastern Ghouta area of Damascus, said Lucas, who has been collating and corroborating reports from Syria since the war started in 2011. The Sarin attack was a “test case for the Russians in terms of how they could cause confusion,” he said.

Due to the dangers of reporting in Syria, Western media have had restricted access to the country (Committee to Protect Journalists). Lucas said that makes it particularly necessary to corroborate reports from within Syria.

“There are always ‘fog of war’ incidents that take place,” he said, explaining that reports from citizen journalists sometimes are found to exaggerate numbers of tragedies or include other inaccuracies.

The criticisms by pro-Assad activists are not part of an effort to improve the veracity of reporting though, said Lucas.

Lucas said the obfuscation about the Douma attack has gained more traction than the alternative narratives about the Skripal poisoning, particularly online, with Western readers. This is based on the long-term propaganda campaign against different groups supported by the West, he said.

The Syria Civil Defence, also known as the White Helmets, is a volunteer organization providing medical assistance in rebel-held areas. Russia’s foreign ministry and state-backed outlets including TASS accused them of staging the alleged chemical attack in Douma.

They are frequently accused of being jihadists with links to Al Qa’eda, or stooges of the U.S. or other Western governments.

Critics say they are given carte blanche by Western media, due to their links to Western governments, including receiving funding from the US aid agency USAID and the UK Foreign Office .

Lucas said he and many colleagues use reports from the White Helmets, which they are often able to verify from other sources on the ground.

“The [anti-]White Helmets campaign has a resonance on social media, just because it’s been going on for so long,” said Lucas. “Ever since the White Helmets came in as a rescue organization in 2013, to delegitimize them.”

Undermining the White Helmets fits with the Syrian government’s attacks on hospitals, to send a message to the population that if they help the rebels there will be no defense, said Lucas.

The European Union-backed fact-checking site EUvsDisinfo has found that none of the accusations against the White Helmets are corroborated, and fit with a pattern of Russian disinformation tactics.

Analysts at the Digital Forensic Research Lab, an offshoot of Washington DC think tank Atlantic Council, have analyzed how various unsubstantiated theories and assertions about the White Helmets, and their “staging” of the Douma attack, were carried by Russian and Syrian media, which then re-reported each other’s reporting to spread confusion and uncertainty.

In Douma, pro-Assad media have been backed up by Western bloggers and academics who are skeptical of mainstream media, and the motives of the U.S., French, and UK governments.

A group of academics, labeled “apologists for Assad” by the Times, formed a Working Group on Syria, Propaganda and Media. The group has not cast doubt on any specific report from Syria, but says there is “an urgent need for rigorous academic analysis of media reporting of this war, the role that propaganda has played in terms of shaping perceptions of the conflict”.

The reports from Russian and Syrian officials and media are unsupported, but are a logical next step after reports of a chemical weapons attack, said Lucas.

“There had to be disinformation spread after this [attack] to prevent the type of international response the Russians don’t want,” he said.