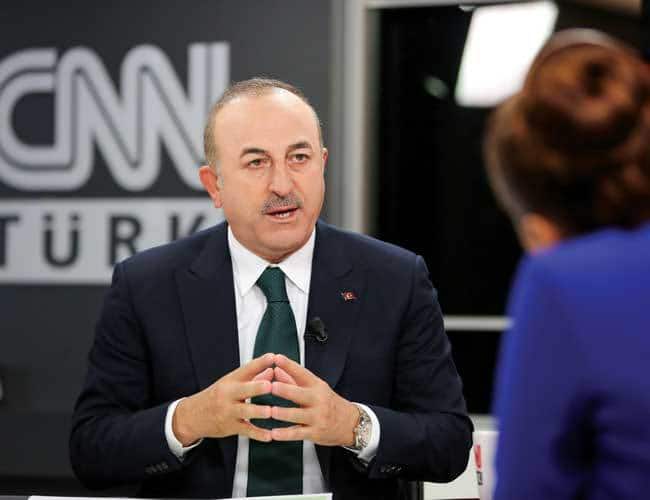 Turkish meetings in Moscow with Russian and Iranian counterparts on Thursday

UPDATE 1345 GMT: The Kurdish YPG militia says Turkish forces have fired about 70 shells at Kurdish villages in the Afrin canton since midnight.

The operation has actually started de facto with cross-border shelling.

When I say “de facto”, I don’t want it to be misunderstood. It has begun. All terror networks and elements in northern Syria will be eliminated. There is no other way.

Canikli said the main body of Turkish forces for an offensive has been moved to the border. He asserted that Russian military personnel have begun withdrawal from Afrin.

Turkey’s State Anadolu Agency also reported the pullback of Russian military police to the regime-held villages of Nubl and al-Zahra.

Turkish media, citing “sources from the ground”, said Free Syrian Army rebels with heavy weapons have deployed in the Azaz region along the border with Afrin, setting up checkpoints on the Afrin highway.

Responding to the US appeal to Turkey to focus on the Islamic State, Canikli said this must be an attempted “distraction” as ISIS has been defeated in Syria.

In a realignment of forces in Syria’s 81-month conflict, Turkey is asking for Russian acceptance of military operations against the Kurdish canton of Afrin in the northwest. Meanwhile, the Assad regime has said that it will shoot down Turkish warplanes, and the US has asked Ankara to refrain from an attack and focus on the Islamic State.

Turkish President Recep Tayyip Erdoğan has warned for weeks that Turkey will move against Afrin and possibly the city of Manbij in eastern Aleppo Province, held by the US-backed, Kurdish-led Syrian Democratic Forces. Ankara considers the Syrian Kurdish Democratic Union Party (PYD) and its Kurdish militia YPG to be part of the Turkish Kurdish insurgency PKK.

The warnings have become louder in the last week amid reports that the US is planning to create a 30,000-strong border force, half of which will come from the SDF and half from other recruits. Erdoğan immediately said that Turkey will drown the “terror army” and launch an offensive on Afrin. Foreign Minister Mevlut Cavusoglu told US Secretary of State Rex Tillerson that operations could also include Manbij, and the head of the Turkish military, Gen. Hulusi Akar, spread the message at a NATO meeting.

Even though Tillerson claimed on Wednesday that the US proposal had been exaggerated and was “misportrayed” — a statement amplified by the US-led coalition as “this is not a new ‘army’ or conventional ‘border guard’ force — Turkey dispatched Akar and intelligence chief Hakan Fidan to Moscow to seek Russian and Iranian backing of any military measures.

“We will intervene in Afrin,” Cavusoglu said on TV. “We are meeting the Russians and Iran on the use of air space.”

He said that he did not expect Russian opposition: “When we carry out an intervention, we need to coordinate on this, it should not impact the Russian observers.”

In Washington, State Department spokeswoman Heather Nauert appealed to Ankara, “We would call … on the Turks to not take any actions of that sort. We don’t want them to engage in violence but we want them to keep focused on ISIS.”

Earlier this week, both the Pentagon and the US-led coalition indicated that they would take no action in Afrin in the event of a Turkish offensive.

Cavusoglu said on Thursday, “Our response to this is our legitimate right to retaliate. We told the United States this.”

The Assad regime also tried to deter Turkey through a message from Deputy Foreign Minister Faisal al-Mikdad, “We warn the Turkish leadership that if they initiate combat operations in the Afrin area, that will be considered an act of aggression by the Turkish army….Syria will confront any Turkish aggression or military action against its territory with appropriate response.”

Airwars: US-Led Coalition Killed Up to 6,100 in Iraq and Syria

The US-led coalition against the Islamic State killed up to 6,100 civilians in Iraq and Syria on 2017, according to the monitoring group Airwars.

The report gave a range of 3,923 to 6,102 noncombatants “likely killed” in air and artillery strikes, more than three times the total of 2016.

US Central Command has said that at least 817 civilians were killed since the American-led strikes began in 2014.

Pentagon spokesman Eric Pahon maintained that the coalition does “everything within its power to limit harm to noncombatants and civilian infrastructure”.

Russian warplanes dropped incendiary munitions on towns and villages across southern Idlib Province in northwest Syria for a second straight day on Thursday.

The attacks are the largest use of incendiary weapons on Idlib since November, as Russian forces — despite their proclamation of a de-escalation zone — support a pro-Assad offensive trying to regain territory in the province.

Thursday’s munition hit at least one camp for persons recently displaced by fighting elsewhere in Idlib. Some airstrikes targeted the outskirts of Khan Sheikhoun, the town where the Assad regime killed up to 93 people in a sarin attack last April.

Incendiary munitions start intense fires which are difficult to extinguish.

“We tried to put out the fires in the areas, but the burning only increased,” said civil defense spokesman Ahmad Sheikho. “That’s what told us these bombs were napalm.”

Neither Assad regime nor Russia State media reported the attacks.

Claimed video of a father mourning his wife and two children in the town of Ma’arat al-Num’an:

Warning… graphic. A father’s pain, as he mourns the loss of his wife and two children, today in Maarat al-Nouman, #Idlib Syria.
Who will help bring justice to the people of #Syria…?https://t.co/Ix6dp3Htvb pic.twitter.com/aMZIDRPuzN