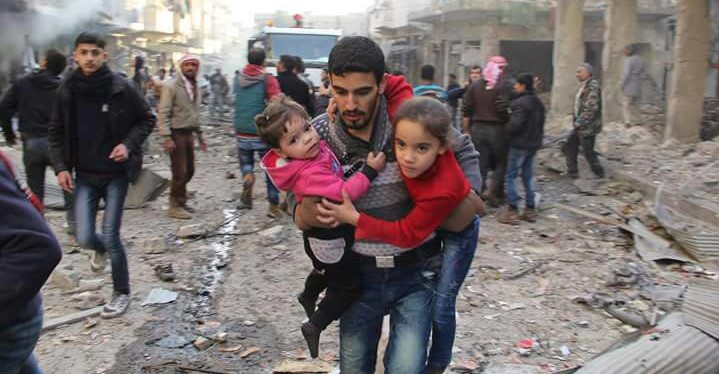 PHOTO: A man carries two children from a market bombed by Russia on Sunday

UPDATE 1315 GMT: One member of Russian forces has been killed and two seriously injured in the rebel fightback that recaptured the National Eye Hospital and two neighborhoods in eastern Aleppo city this morning.

Footage from a pro-Russian outlet of the remains of the field hospital, including the slain female medic (Warning — Graphic):

A reorganized rebel alliance has declared the “Anger for Aleppo” operation. The counter-offensive reclaimed the Myassar and Karam al-Tahhan areas, both of which were seized on Sunday by pro-Assad militias. The rebels said 40 militiamen were killed, most of them Afghan.

Meanwhile, rebels rocketed the regime positions in the Nubl and Zahraa villages, north of Aleppo.

ORIGINAL ENTRY: At least 65 people were killed in Idlib Province on Sunday, as Russian jets bombed civilian sites across the opposition-held area.

While the Syrian air force has concentrated on bombardment of besieged eastern Aleppo city amid an advance by pro-Assad forces, Russian warplanes have attacked across Idlib and western Aleppo Provinces, the major remaining opposition territory in Syria.

One of the 32 airstrikes, hitting a market in Maarat al-Num’an, killed more than 30 people. Another 22 died in Kafranbel.

At least 115 people were injured in the attacks, according to the White Helmets civil defense organization.

Videos showed the devastation of the Maarat al-Num’an market:

A ugly Massacre in #Maart_AlNuman in #Idlib. Committed by the criminal #Russia|n warplanes. Killed and wounded dozens of civilians.#Syria pic.twitter.com/7tMlQ7TWrG

Foreign forces and regime units pushed farther into eastern Aleppo city on Sunday, closing on the seizure of all opposition territory north of the Aleppo Citadel.

Rebels claimed a fightback on Monday morning, regaining the National Eye Hospital, despite assaults by regime warplanes with thermobaric bombs.

Since November 26, the pro-Assad attacks — by Iranian troops, Hezbollah fighters, and Iraqi, Palestinian, and Afghan militia along with some Syrian military and paramilitary units — have taken about half of the opposition area.

Residents contacted by phone and text message said conditions were dire amid bombing and the shortages of food and supplies in the area, under a Russian-regime siege since late August. People fleeing from districts taken by the offensive are looking for places to sleep, while those in the remaining opposition neighborhoods are breaking up furniture from destroyed houses for cooking and heating. Some sent text messages with their last farewells, saying they expect to die.

Russian Foreign Minister Sergei Lavrov said on Monday that those rebels who refuse to leave Eastern Aleppo will be regarded as “terrorists”:

By refusing to walk out from eastern Aleppo they will in fact go ahead with armed struggle. We will treat them accordingly, as terrorists and extremists, and support the Syrian army in its operation against such armed gangs.

Lavrov said that US Secretary of State John Kerry’s proposal, presented in Rome last Friday, set out “coordination of specific routes and dates for the pullout of all militants without any exceptions from eastern Aleppo”. He said Russian and American experts will first agree on the routes and a timeframe for the withdrawal of rebels before a ceasefire takes effect.

Russia has blocked any provision of aid to the besieged opposition areas and refused any halt to attacks until the last “terrorists” are eliminated.

Lavrov said on Monday that a draft UN Security Council resolution, calling for aid and an immediate ceasefire, would be “counter-productive”.

Russia will probably veto the resolution when it is tabled on Monday night in New York.

Lavrov said consultations with the US in Geneva had been delayed at the request of the Americans, but are “most likely to begin [Tuesday] evening or on Wednesday morning”.