PHOTO: Russian Foreign Minister Sergei Lavrov and US Secretary of State John Kerry at the Mediterranean Dialogue Forum on Friday

Killing the Last Clown of Aleppo

UPDATE 1130 GMT: Russian Foreign Minister Sergei Lavrov says US Secretary of State John Kerry has finally made suggestions on Aleppo that are in line with those of Moscow’s experts.

Lavrov told journalists that until Friday, the US was doing its best to to “take the heat off al-Nusra”, the Jabhat Fatah al-Sham faction that Russia falsely claims dominates the rebels in Aleppo city. However, he hailed a change:

Moscow is ready to immediately send our military experts and diplomats to Geneva to work out joint actions with our US colleagues in line with the American proposals, which would ensure the withdrawal of all militants without exception from eastern Aleppo, and would provide unimpeded humanitarian supplies to the city’s residents and ensure the establishment of normal life in eastern Aleppo.

ORIGINAL ENTRY: Amid the continuing Russian-regime assault across Syria and on the city of Aleppo, US Secretary of State John Kerry has met Russia’s Foreign Minister Sergei Lavrov and declared, “All diplomacy is still alive.”

Kerry spoke to journalists as he was seated at a table with Lavrov on the sidelines of a forum attended by foreign ministers and energy executives.

He insisted later at a news conference, “We continue to explore every avenue to halt the inexcusable carnage in Syria.”

Russia, the Assad regime, and Damascus’ other foreign allies such as Iran have besieged opposition areas of Aleppo, divided since July. They have bombed intensely since September 19, killing more than 1,200 people and preventing any aid from reaching districts exhausted of food and supplies.

Since last Saturday, a pro-Assad offensive — with Iranian troops, Hezbollah fighters, and Iraqi and Pakistani militias, supported by Russian airstrikes — have taken about 1/3 of the opposition areas. There are claims this morning of a further breakthrough seizing 25% of the remaining territory.

Russia has said that it will consider a ceasefire, including in high-level talks with Turkey on Wednesday and Thursday. However, Lavrov has added that military operations against “terrorists” will not be halted.

US officials said earlier this week that, despite the apparent Russian-regime goal to crush opposition in eastern Aleppo city and other parts of Syria, Kerry was pursuing a political settlement as “a long shot at best, but also the only chance” to halt military operations. One said, “We are still actively trying to push it. We are not giving up on this. We think we need to give it a chance.”

Kerry also met UN envoy Staffan de Mistura on Friday and said they would meet again early next week in Geneva. He said that the discussions were seeking agreement on evacuations of civilians and the renewal of a political process: “That is Staffan De Mistura’s goal, it is the apparent Russian goal, it is our goal.”

The US had suspended talks with the Russians over the political process in October, protesting the “barbaric” Russian alliance with regime “war crimes” in Aleppo.

Turkey has balanced its latest talks with Russia about cooperation over a ceasefire with the declaration that President Assad should step down.

We believe that Assad cannot actually enhance the national unity in the country. We have to be realistic.

The person who kills almost 600,000 people shouldn’t rule any country.

The Foreign Minister also maintained the line for a ceasefire, including in the Russian-regime attacks on eastern Aleppo city, saying a cessation of hostilities should be announced “as soon as possible, immediately”.

The reconciliation between Turkey and Russia since August, ending months of strained relations after the November 2015 Turkish downing of a Russian warplane near the Syrian-Turkish border, has led to speculation of a deal — Ankara would accept the Russia-regime conquest of Aleppo city, while Moscow will not opposed a Turkish-supported rebel offensive taking other parts of northern Aleppo Province.

The jet crashed just after midnight as it attacked the Sha’ar district. The crew were identified as Major Jafar Hasan and Captain Tariq Ma’ala.

Children’s Letters from Eastern Aleppo: “I Love It and Will Not Leave It”

Opposition outlets have posted a series of letters from children, aged between 8 and 12, living amid the Russian-regime siege and bombardment of eastern Aleppo city.

In the besieged and destroyed Aleppo devastated by the criminals Bashar and Russia, I love Aleppo and I will not leave it, stop killing us and break the siege.

I write with my left hand because my right one is wounded, I like painting, but I don’t have colors. 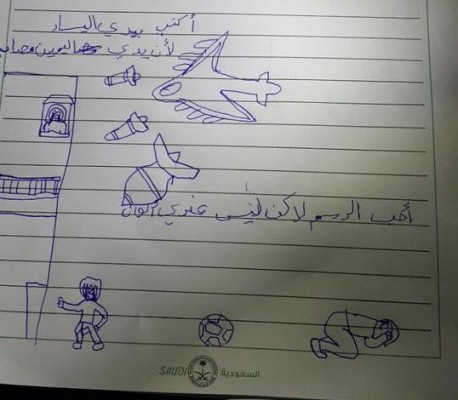 I wake up every night several times in horror from the frightening Russian bombardment, I want to live safely, stop the bombing of Aleppo, I want to go back to my school, I miss my friends and my teacher.

And Mohammad says simply, “I like to play ball, but Bashar sends planes to kill us. When the siege is broken I’ll have a chicken.” 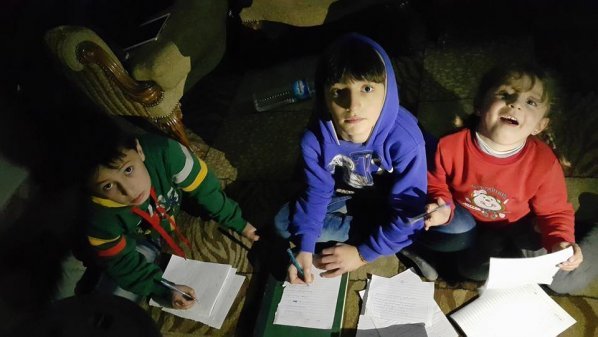 Removal of People in Another Capitulation Near Damascus

Hundreds of people have left the town of al-Tal, in the latest capitulation of an opposition-held area near Damascus.

State media said about 1,000 rebels and their families left the town, southwest of the capital, on Friday. They will go to opposition-held Idlib Province in northwest Syria.

Beginning with the fall of Darayya in late August, years of regime siege and bombardment have forced opposition groups to give up control in a series of Damascus suburbs.

Earlier this week, rebels and their families began leaving Khan al-Shih, the last major opposition position on the highway between Damascus and Quneitra Province in southwest Syria.