Syria Special: Obama’s Legacy Will Be Forever Tarnished by His Inaction 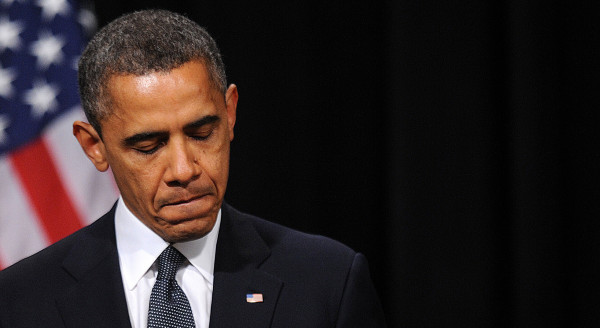 This is an updated and modified version of our Syria Special: Obama’s Destiny, now published with our partner The Conversation:

As his administration winds down, Barack Obama has plenty to be proud of. He can point to international breakthroughs that seemed unthinkable when he took office, from the nuclear agreement with Iran to the reopening of diplomatic relations with Cuba after almost 60 years. He can cite the concerted international action to stave off economic catastrophe, a more constructive US approach to Latin America, and a solid if cautious relationship with China.

But as far as Obama’s legacy goes, few of these noble achievements will stick to the wall after he gives his farewell speech in January 2017. Instead, he will always be associated with the fate of one country: Syria.

See also Syria Analysis: Obama — “It Haunts Me Constantly” (But I Won’t Do Anything)
Syria Special: “Very Proud” Obama Sells Out Allies and Millions of Syrians

At his inaguration in January 2009, Obama declared that Americans “reject as false the choice between our safety and our ideals”. At the time, neither he nor anyone else thought those words would apply to Syria. Back then, neighbouring Iraq was the ultimate exemplar of American hubris and failure, with Afghanistan coming in second. But nearly eight years later, Syria is at the centre of a destabilised and fractured Middle East.

The President, who infamously reduced his philosophy of global American power to “don’t do stupid shit”, apparently never grasped that the consequences of inaction could be far worse than stupid.

When the protests of the so-called Arab Awakening hit Damascus in 2011, Obama hoped that the Syrian President, Bashar al-Assad, would respond to the protesters’ demands for reform with something rather than beatings, detention, and torture. By that August, those hopes were dashed, and Obama made his feelings clear:

We have consistently said that President Assad must lead a democratic transition or get out of the way. He has not led. For the sake of the Syrian people, the time has come for President Assad to step aside.

Assad was not swayed. Russian Foreign Minister Sergei Lavrov had said that 50,000 deaths were acceptable to maintain power, and had assented when the regime asked if 100,000 were permissible. With his army reeling, he turned to his warplanes. Homs, Syria’s third-largest city, was decimated by months of bombing, with thousands perishing and more fleeing, until the opposition capitulated in all but a few districts in spring 2012. The tenor of this scorched-earth war had been set.

Obama did little. Economic sanctions were imposed on the Damascus government, but Assad and his inner circle were propped up with billions from Iran and Russia. The CIA eventually set up training camps for some rebels, notably in Turkey, and got Eastern European arms to some others, but the process was cumbersome and its impact puny.

Crucially, there were no anti-aircraft weapons to check Assad’s bombing, and no protected areas. In Obama’s first term, Secretary of State Hillary Clinton and CIA Director David Petraeus pressed for stronger measures, but the President vetoed all proposals. Meanwhile, in stark comparison with the small number of rebels who made it through CIA vetting, Iran began establishing a 50,000-strong militia to bolster the weakened Syrian Army, while Hezbollah put in several thousand of its own fighters.

Assad’s warplanes kept bombing. When they ran short of conventional munitions, they turned to barrel bombs, drums filled with explosive and dropped out of helicopters. When these were not enough, the Syrian military began experimenting with chemical weapons. And on August 21 2013, the regime unleashed sarin nerve agent on multiple locations near Damascus. Conservative reports from reliable outlets say more than 1,400 people were killed, many of them were first responders and medics who tried to treat the suffocating.

Once again, Obama did little. The President’s top advisers – among them his second-term Secretary of State John Kerry, who was comparing Assad with Hitler – were gathered for the decision to intervene, finally setting up protected areas and trying to ground the Syrian Air Force. But returning from a stroll in the Rose Garden, Obama surprised them with a “no”. Instead, he would defer any decision and consult Congress.

A few days later, the US found an alternative. Russia, scrambling to save its troublesome ally, suggested that Assad could be pressed to give up his chemical stocks and equipment. Obama accepted. “With modest effort and risk, we can stop children from being gassed to death, and thereby make our own children safer over the long run,” he said.

Damascus did give up almost all of the chemicals, but it retained its conventional weapons, which had already killed tens of thousands of civilians. And it could and did keep filling its barrel bombs with chlorine, which is not banned by chemical weapons conventions.

The course of Obama’s action, or inaction, had been set. The US proceeded with its version of the “political process”, which from the outset was more myth than reality. Assad will never step down for a “transitional governing authority”, and the opposition and rebels will never accept Assad. But the Russians bought time, and Obama bought into the illusion that he was doggedly avoiding any “stupid shit”.

When pro-Assad forces imposed their “surrender or starve” sieges, Obama stood aside. When Russia intervened with its bombers and military “advisers” in September 2015 to save Assad and his depleted military, Obama watched. As the Russians and regime targeted hospitals and clinics, destroying scores of them, as they hit schools, markets, fuel depots, and water and power facilities, he was passive.

The President could always invoke the “political process”. And, from September 2014, he could use the diversion of the War Against the Islamic State, who controlled parts of Syria in a war with rebels and with Kurdish forces.

Today, the war grinds on and the civilian deaths mount. International attention has been galvanised by the Russian-regime attempt to bomb and besiege opposition areas of Aleppo, Syria’s largest city, into submission. In her bid to succeed Obama, Clinton revived the idea of protecting areas of the country and exerting leverage against the Russians, rather than walking a step behind them – but she failed, and Donald Trump will soon take the helm.

Still, the President’s view of the Syrian conflict certainly has its adherents. There are more than enough pundits in Washington, many of them former Obama officials who counselled against action, to wring hands about the danger of entanglement with “extremists”, of a Russian response, of the logistics of more engagement.

Obama can even count on Trump, who cautioned Americans that if they listened to Clinton they’d “end up with World War III”. And, of course, he can count on the Russians, whose propaganda machine easily matches their political and military commitment to the Assad regime’s deadly rule.

In the speech justifying his inaction after the August 2013 chemical attacks, Obama proclaimed:

Our ideals and principles, as well as our national security, are at stake in Syria, along with our leadership of a world where we seek to ensure that the worst weapons will never be used.

The “worst weapons” – bunker-buster bombs, incendiary munitions, thermobaric explosives, and occasionally chemical substances – are still being used. Hundreds of civilians, almost all of them killed by Russian and the Assad regime, are dying each week. Millions are unlikely to ever return home.

But asked about his administration’s failure to intervene, even after those “worst weapons” were first used near Damascus, the President said: “I’m very proud of this moment.”