In the last months of his Administration, US President Bill Clinton tried to resolve the Israel-Palestine dispute. The effort fell short, but it was the closest to the resolution of the conflict since the creation of the Israeli State in 1948.

In the last months of his Administration, President Barack Obama is giving interviews to explain how everyone else is to blame for the five-year Syrian conflict, which has supplanted the Israeli-Palestinian issue as the region’s destabilizing centre and shows no prospect of receding.

Rather than evaluate which could be done to mitigate the damage, Obama has chided allies such as Britain, Germany, and France. He has implicitly lashed out at his former Secretary of State, Hillary Clinton, as she campaigns to succeed him. And he has shown little regards for the hundreds of thousands of Syrians who have been killed and the millions who have been displaced, and who will continue to die and flee in his final months in office.

Obama’s attempt to define — or perhaps rescue — his legacy is framed in an article by Jeffrey Goldberg of The Atlantic. Much of the piece is taken up by Goldberg’s interpretation, but when you get to the President’s statements, they cut to the bone.

Goldberg rightly opens with Obama’s Hamlet moment: his sudden decision not to respond when the Assad regime used chemical weapons near Damascus in August 2013, killing more than 1,400 people.

It had seemed as though intervention was inevitable. Obama had indicated as much a year previously when he declared:

Secretary of State John Kerry has prepared the rationale by highlighting the deadliest chemical attack since Saddam Hussein’s gassing of Iraqi Kurds in 1988, comparing Assad to Hitler, and emphasizing: “It is directly related to our credibility and whether countries still believe the United States when it says something. They are watching to see if Syria can get away with it.”

Britain’s Parliament had stepped back from military action, but Arab States and Turkey were ready. French warplanes were on alert. Obama’s top advisors gathered at the White House on August 30 to confirm the plans.

And then the President went for a walk in the Rose Garden with his Chief of Staff, Denis McDonough, the leading sceptic of intervention. Obama returned to tell Kerry and the other surprised officials that there would be no action to establish protected areas and prevent further regime airstrikes. Instead, he would refer the matter to the US Congress.

That referral never occurred. Instead, Russia stepped in to give the President his face-saving “solution”: an international initiative would ensure that Assad gave up all chemical weapons.

Three-and-a-half years later, Moscow is carrying out thousands of its own airstrikes in support of the Assad regime, which has continued to use chlorine in its barrel bombs. 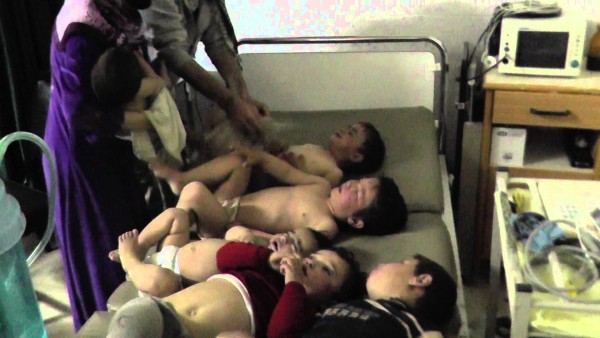 What is initially striking about Obama’s commentary to Goldberg is the lack of any reference to those most immediately affected by his decision. In autumn 2013, the approximate death toll in Syria was 110,000; in 2016 — although the UN has long given up counting the bodies — a conservative estimate is more than three times than number. The number of registered refugees was then 1.6 million; it is now more than 4.8 million, with an estimated 7 million people displaced inside Syria.

Not a single one of these people is in Obama’s expression of satisfaction about August 30, 2013:

I’m very proud of this moment.

And the fact that I was able to pull back from the immediate pressures and think through in my own mind what was in America’s interest, not only with respect to Syria but also with respect to our democracy, was as tough a decision as I’ve made — and I believe ultimately it was the right decision to make.

Millions of Syrians had disappeared for Obama to establish himself as the maverick – the visionary who led America away from the abyss.

Other close allies must also be thrown under the bus to burnish Obama’s reputation. The President hands off responsibility for episodes such as the turmoil in Libya after the 2011 overthrow of Muammar Qaddafi: French President Nicolas Sarkozy was a braggart and Britain’s David Cameron was a weak Prime Minister “distracted by a range of other things”.

Those discarded include those who were and sometimes still are his closest advisors. Secretary of State John Kerry’s futile attempts for a meaningful response to Assad’s aggression becomes the Obama line, “Oh, another proposal?” UN Ambassador Samantha Power, who built her reputation on studies of failure to prevent genocides, is summarily dismissed: “Samantha, enough, I’ve already read your book.”

And it is necessary to question if former Secretary of State Hillary Clinton, now campaigning to become President, will be a reliable Commander-in-Chief. There are no outright attacks on Clinton, but the interview charts the difference of opinions between the two over Middle East strategy.

Syria is the catalyst, with Clinton’s advocacy of no-fly zones and support of the protesters and rebels. Obama’s excuse for rejection is that the US President’s responsibility must be “don’t do stupid shit”. Clinton reacts that this “is not an organizing principle”.

A “rip-shit angry” Obama eventually decided to make peace with the Secretary of State and the two “hugged it out”. Three years later, however, the President has the final word through the interviews: he has a higher understanding of what needs to be done in Syria and in US foreign policy. 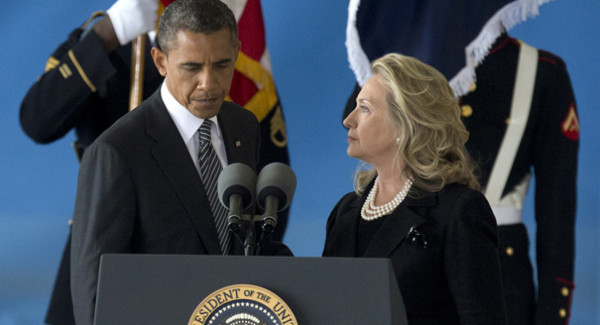 There are very good reasons to debate the manner of intervention to save lives. Establishing protected zones in Syria has never been an easy quick-fix, and it is even more difficult now because Russia — as Moscow calculated — threw up another consideration with the introduction of its warplanes and military “advisors”. Working with local opposition-rebel groups, as well with Kurdish factions who now control much of northeast Syria, is a complex and challenging process. Getting to a meaningful “transition” in which President Assad steps aside will require a determined stance with respect to all groups in the conflict, as well as Assad’s allies Russia and Iran. Arrangements for a post-Assad Syria will require years of commitment, the real lesson of Libya rather than Obama’s deflection of blame.

However, the President’s long testimonial is not an engagement of this necessary debate. It is an evasion. He blithely distorts it as the requirement that “you are obliged to invade the country and install a government you prefer”. He issues slogans such as “we’ve got to be hardheaded at the same time as we’re bighearted”.

These thousands of words are the same dismissal that Obama offered in one telling sentence in — a dismissal not only of the Syrian conflict but, more importantly, of the people caught up in it, who paid with lives and a refugee’s subsistence because they had thoughts of rights and reforms:

When you talk about the moderate opposition, many of these people were farmers or dentists or maybe some radio reporters who didn’t have a lot of experience fighting.

And so — “I’m very proud of this moment” — the farmers, dentists, radio reporters, teachers, lawyers, students, and children take their place in Barack Obama’s legacy.