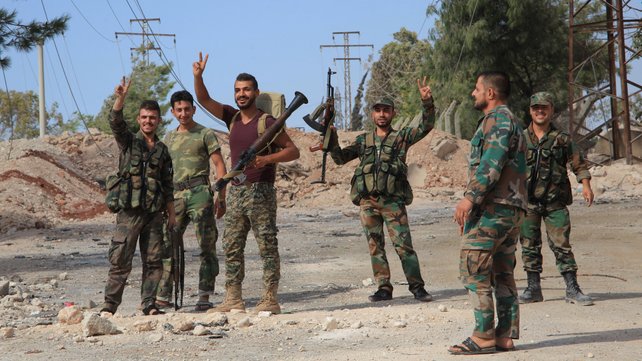 UPDATE 2030 GMT: Following a meeting with Russian President Vladimir Putin, Barack Obama has spoken of “productive conversations” but said an agreement is hindered by “gaps of trust”.

Obama said the 90-minute discussion, on the sidelines of the G20 summit in China, was “candid” and “blunt”: “We have had some productive conversations about what a real cessation of hostilities would look like that would allow us both…to focus our attention on common enemies.”

The President made no apparent reference to Russia’s escalation of bombing to support an advance by pro-Assad forces near Aleppo, effectively renewing the siege of opposition areas.

Putin told reporters that a deal may come “within a few days”: “Against all odds we have a certain rapprochement and understanding of what we might do to ease tensions in Syria and achieve mutually acceptable solutions.”

Meanwhile, the Russian Defense Ministry has tried to keep attention away from its bombing, accusing the US of not doing enough to stop rebel groups “under [its] control” from targeting humanitarian aid corridors into Aleppo.

In one of the latest attacks, Russian forces killed at least six people in the Sukkari district of Aleppo, according to opposition sites. The Russians reportedly used a ballistic missile alongside the airstrikes.

UPDATE 1445 GMT: Rebels have launched an attack near the artillery base recaptured by pro-Assad forces.

The assault in the al-Amiriya district (see map) began with a large vehicle bombing by the Ahrar al-Sham faction.

Rebels claim they have already secured several buildings — video of the advance after the bombing:

ORIGINAL ENTRY: After weeks of aerial and ground assaults, Russia and the Assad regime have retaken an artillery base southwest of Aleppo, renewing a siege on opposition districts of Syria’s largest city.

The Syrian military and foreign allies such as Hezbollah, enabled by some of the most intensive Russian bombing of its 11-month intervention, finally completed the takeover of an air force college on Sunday morning. Then in the afternoon, the remaining units of the rebel bloc Jaish al-Fatah withdrew from the base, one of the regime’s largest in Syria. 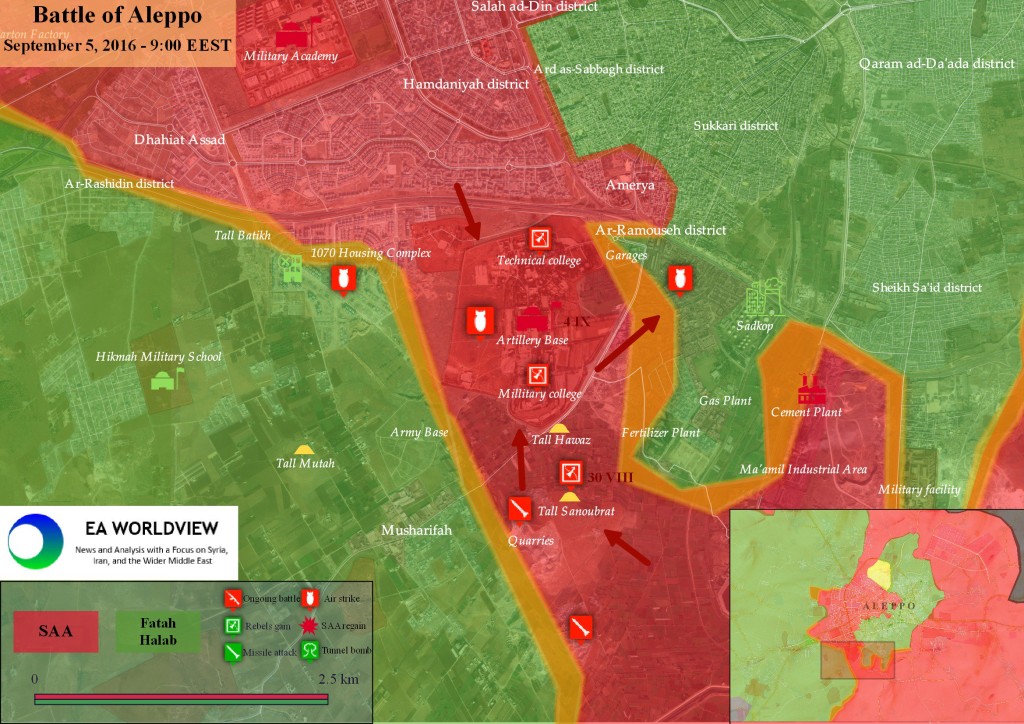 The rebels had taken the complex in early August, days after the start of an offensive to counter a Russian-regime siege that had been imposed on opposition areas a month earlier.

Jaish al-Fateh was able to open a 2.5-km (1.5-mile) corridor into Aleppo. While the route was not secured from attacks, it was a notable symbolic victory in the opposition fight over the city, divided since July 2012.

The rebel advance also put pressure on the pro-Assad forces, most of whom now come from Russia’s warplanes, Iranian units, Hezbollah, and Iranian-led foreign militias. The southern ring road was controlled by Jaish al-Fateh, making regime movement of men and supplies more difficult.

However, the Russian air power prevented a collapse of the regime position. Pro-Assad forces were able to hold a cement factory, used as a garrison, near the ring road. They then regained some territory, notably the high point at Umm al-Qara and part of the 1070 housing complex, to prevent rebel securing the artillery base from attack.

The news was a much-needed boost for the Assad regime. While its sieges have finally forced the capitulation of some towns in southern Syria, the rebel offensive near Aleppo was complemented last week by a sudden push in neighboring northern Hama Province that claimed towns and villages across a wide front and moved within 10 km (6 miles) of Hama city.

Footage from the pro-Russian ANNA:

The ruins of the base:

Russia Backs Away from the Political Process

Sunday’s victory also allowed Russia to again slow down any move for a political resolution that would benefit the opposition and rebels.

See Syria Feature: Russia Steps Back from Ceasefire Deal as It Bombs for Assad’s Recovery Near Aleppo
Syria Analysis: In Trouble Elsewhere, Assad Finally Succeeds with “Starve and Surrender”

US officials in Geneva had said up to yesterday that a deal for 48-hour ceasefires, allowing aid into parts of Aleppo, was imminent. The proposal would also have included US intelligence-sharing with the Russians over attacks on the jihadists of Jabhat Fatah al-Sham, formerly Jabhat al-Nusra, while supposedly restricting some airstrikes by the Assad regime.

However, by Sunday afternoon, the American officials were saying that Russia had stepped back from any agreement. Diplomats would confer with their capitals, with US Secretary of State John Kerry meeting Russian Foreign Minister Sergei Lavrov on Monday.

In a statement to leaders of BRICS (Brazil, Russia, India, China, and South Africa) on the sidelines of the G20 summit in China, Russian Vladimir Putin put out the template statement:

Final settlement of conflicts of the kind may be possible exclusively by political means….Realistic fighting threats of terrorism may be possible only in joint efforts of all involved countries.

The Kremlin also said Putin discussed the Syrian crisis in a meeting with President Obama.

Video: Report from the Rebel Frontline in Northern Hama

On the Ground News reports from the frontline of the rebel offensive in northern Hama Province:

In the week-long offensive, rebels have taken a series of towns and villages to close within 10 km (6 miles) of Hama city.

Footage of a medical center damaged by a regime bombing in Khan Sheikhoun in southern Idlib Province:

Russian and regime attacks have destroyed or damaged scores of hospital and medical facilities across Syria, especially in the northwest.

Israel has responded with attacks on Syria military positions, following mortars fired from inside Syria that hit the Israeli-occupied Golan Heights.

“In response to mortar fire earlier today, the Israel Defense Force targeted cannons of the Syrian regime in the northern Syrian Golan Heights,” said an Israeli military statement. “The IDF holds the Syrian government accountable for this blatant breach of Israeli sovereignty, and will continue to act in order to safeguard Israel.”

The statement said there was no apparent damage from the mortars, launched from Quneitra Province in southwest Syria.

The Assad regime said there was “material damage” from two rockets fired by an Israeli reconnaissance plane.

Footage of Jaish al-Islam rebels in the fourth phase of their counter-offensive against pro-Assad troops, in the East Ghouta region near Damascus:

Jaish al-Islam, the largest rebel faction near the capital, launched the latest attacks last weekend in a 12 square-km (4 square-mile) area. It claims the killing of 17 regime troops and seizure of others in the latest atttacks, as well as the capture of three tanks and a BMP armored vehicle.

Jaish al-Islam claims that more than 200 pro-Assad troops have been killed since the fourth phase began last Wednesday, with tanks and armored personnel carriers captured and “tons” of infantry gear seized.

The faction is hoping to push back regime advances from the spring, which have taken territory northeast of Damascus and much of the southern part of East Ghouta.

Turkey’s military says that a 12-day Turkish-rebel offensive has cleared the Islamic State from the Turkish-Syrian border, opening the way to a 90-km (56-mile) “safe haven”.

The military said the capture of about 20 villages near the town of al-Rai this weekend, in the second phase of the offensive, had pushed back ISIS into a shrinking space in northern Syria.

Since 2014 Turkey has proposed the 90-km corridor, extending 40 km (25 miles) into Syria, from Azaz in the northwest corner of Syria to Jarablus. The area was to be secured both against the Assad regime and the Islamic State.

The initiative had been checked until now by US objections, division within the Turkish system, and Russia’s aerial intervention last September.

However, Ankara pursued it with renewed urgency after the Kurdish-led Syrian Democratic Forces, advancing against ISIS, crossed the Euphrates River — a “red line” for Turkey over Kurdish-controlled territory — and moved into northern Aleppo Province. In July, the SDF captured the city of Manbij, ISIS’s main position in the province.