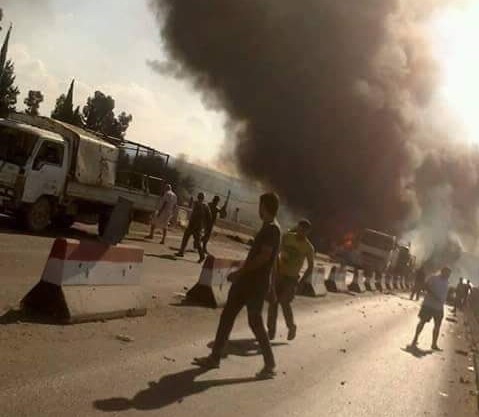 PHOTO: Smoke rises from a bomb near Tartous in western Syria on Monday

UPDATE 1545 GMT: The Islamic State has claimed the bombings in a statement by its Amaq News Agency.

The double bombing near Tartous in western Syria has killed 30 people and wounded 45, according to a hospital director.

Five people were killed and two injured by an explosives-packed motorcycle north of Hasakah city in northeast Syria.

In Homs, four people — including at least two soldiers — were slain and 10 injured by a car bomb.

One person died and three were injured in the bombing in al-Sabourah, west of Damascus.

Footage of the damage in Homs:

A double bombing was reported at a bridge near Tartous in Latakia Province in western Syria.

In May, 184 people were killed and more than 200 injured in bombings in Tartous — considered an essential base of support for the Assad regime — and nearby Jableh. No group ever claimed responsibility.

Two soldiers were reportedly killed and seven wounded by a car bomb at a checkpoint at the entrance of the al-Zahraa district in Homs city.

Explosions were also reported at al-Saburah, west of Damascus, and at a roundabout in Hasakah city — where there was fighting between Kurdish and regime forces last month — in northeastern Syria.