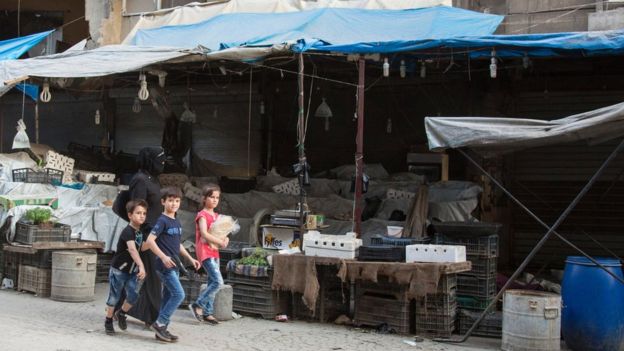 The opposition in Aleppo is facing a siege after an advance by pro-Assad forces north of Syria’s largest city.

Last week the Syrian militia and foreign militias, covered by intense Russian airstrikes, seized the al-Mallah Farms and moved within 1.5 km of the al-Castello road. They placed heavy artillery on the hills, establishing “fire control” over the route to threaten any rebel or civilian traffic.

“An average of 150 strikes per day — including airstrikes, barrel bombs and artillery rounds — have hit the area around Castello Road over the past week,” said Abu Fayez, a volunteer with Syrian Civil Defense in east Aleppo.

“This is a terrifyingly high number,” said Abu Fayez, adding that the area previously witnessed two or three airstrikes every few days.

An official in the opposition-held area of Aleppo, divided since July 2012, said months of basic supplies have been stockpiled although some goods are running out.

Brita Hagi Hassan, the President of the opposition’s City Council, said authorities are trying to ration consumption to prevent hoarding and prevent traders from overcharging.

However, prices of non-perishable staple foods have tripled and the cost of fresh produce — if it can be found — is rising even more sharply. A kilogram (2.2 pounds) of tomatoes is now at least five times more expensive.

Activists and UN officials say about 300,000 people live in the opposition districts. Hassan put the number at 400,000.

He said flour, wheat, fuel, sugar, and rice, and residents have been stockpiled:

I reassured people on this matter….We can remain for several months without a problem.

There are posters, pamphlets and there will be a press conference about this matter, so that the people are aware of the new situation, because the situation is very bad.

The council has set aside fuel for essential users such as bakeries, as operators of generators are told to cut back to two hours a day.

The streets are abnormally quiet after several barrel bombs hit our neighborhood. People are waiting.

I could not find fresh produce for the last two days …but there are no severe shortages….Most goods [are] still in the markets. [However] I could not find bread yesterday.

assault was repelled by regime forces.

Footage of the counter-attack:

Turkish Prime Minister Binali Yıldırım said on Wednesday that Ankara is seeking to develop “good relations” with Syria and Iraq:

We will expand the circle of friendship. We have already started doing it. We have normalized our ties with Israel and Russia. Now I’m sure we will normalize ties with Syria. We need it.

Yıldırım’s comments, televised live, did not go into detail on what “good relations” would mean for Turkey’s position on the future of the Assad regime or any change in its approach towards the Syrian opposition and rebels.

Instead, he said, “We expect the other powers in the region to put aside competition and no longer ignore the humanity that is being destroyed.”

Still,a “senior Turkish official” played down any idea of a shift in policy:

There is a distinction between Syria and Bashar al-Assad. We hope, at some point, relations between Turkey and Syria will get back to normal. That’s what it is. That’s all it is.

In recent weeks, Turkey has pursued reconciliation with the Assad regime’s essential ally, Russia, to repair damaged relations from last November’s Turkish downing of a Russian warplane near the Syrian-Turkish border.

In the latest signal, Ankara announced that a delegation from Turkey will travel to Moscow on Thursday to discuss tourism, as well as general bilateral relations as a whole.

The delegation, led by the Foreign Ministry, was invited by Russia after Presidents Recep Tayyip Erdoğan and Vladimir Putin agreed that Moscow’s restrictions on Turkish tourists would be lifted.

Turkish officials are saying that the easing of tensions, after Erdoğan’s apology over the downing of the Russian warplane and the killing of the pilot, will lead to $10 billion for the economy over the next two years.

Ankara is also trying to improve relations with Israel after years of tension, notably over the Israeli position in the Gaza Strip.