Syria Daily: Kerry and Lavrov Renew Talks on US Plan for Cooperation 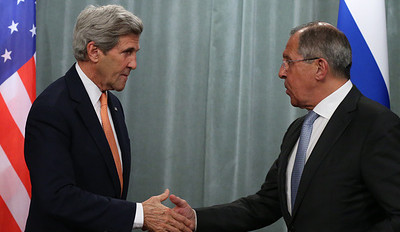 PHOTO: US Secretary of State John Kerry and Russian Foreign Minister Sergei Lavrov at their Tuesday meeting in Laos

US Secretary of State John Kerry and Russian Foreign Minister Sergei Lavrov renewed talks on Tuesday about an American plan for US-Russian military cooperation inside Syria.

The two men met on the sidelines of a meeting of Southeast Asian nations in Laos, 11 days after they spent eight hours in Moscow on the US plan — endorsed by President Obama — for intelligence sharing and cooperation on airstrikes against the Islamic State and the jihadists of Jabhat al-Nusra.

Lavrov said of the US plan for a command-and-control center, “We discussed what needs to be done in order for this agreement to start working in practice in the form of activities of Russian Aerospace Defense Forces and US forces, as well as US-led coalition.”

Then the Foreign Secretary continued Moscow’s pressure for measures not only against the Islamic State and Jabhat al-Nusra, but also rebel factions:

Agreements were made on practical steps that should be made to effectively fight against terrorists, to prevent the situation when so-called moderate opposition remains on terrorist-controlled territories and wants to participate in the ceasefire regime and at the same time wants to ensure that this regime does not inflict any damage on Islamic State and Jabhat al-Nusra.

The US has assured from the beginning of the year that they will be able to disengage between the opposition with which they cooperate and terrorist structures. However, they have not managed to do this so far.

Obama and Kerry say the US proposal will include Russian pressure on the Assad regime to halt its bombing of rebels and opposition areas, and to persuade President Assad to return to talks for a resolution of Syria’s 5 1/2-year conflict.

However, critics — including officials within the Obama Administration — say the Russians have not abided by any agreements since they began thousands of airstrikes last September, destroying infrastructure with the documented killing of 2,141 civilians. They note that the Assad regime effectively collapsed the Geneva political process, brokered by the US and Russia, in April with continued bombing and sieges and with President Assad’s refusal of a transitional governing authority.

Since Kerry’s meetings in Moscow on July 14-15 with Lavrov and President Vladimir Putin, Russian and Syrian airstrikes in the past week have killed hundreds of civilians. Last weekend, five field hospitals and a blood bank were damaged or destroyed by the attacks.

See Syria Daily, July 25: The Russia-Regime War on the Hospitals

Lavrov preferred to shift blame onto the opposition and rebels on Tuesday, effectively trying to rule them out of any renewed political talks:

The so-called High Negotiations Committee has a non-constructive position. They do not propose anything, put forward ultimata that will lead to nothing good — [ultimata] about necessity of Assad’s resignation — and then they say we’ll see what to do with political process. This is an absolutely dead-end position.

Rescuers in Aleppo city suffer a large shrapnel hit to their car, but press on to save a child’s life:

MUST WATCH
Massive shrapnel hits #Aleppo ambulance crew but they plough on to save child's life #Syria pic.twitter.com/scwUNnwmJX

The UN has again called for temporary ceasefires in Aleppo, to allow aid to reach people in opposition-held areas threatened by a pro-Assad siege north of the city.

The UN’s head of humanitarian operations, Stephen O’Brien, told the Security Council on Monday of the need for the 48-hour truces:

I cannot stress enough how critical the situation is for those trapped in eastern Aleppo city.

This population is at serious risk of besiegement, as the fighting closes in and their access to basic necessities runs out.

Almost three weeks ago, the Syrian military and allied foreign militia — enabled by Russian airstrikes — established fire control over the al-Castello Road, the last route into the opposition districts.

Rebels have closed the road to all traffic because of the threat of shelling.

Activists say up to 400,000 people are threatened in eastern Aleppo city. Local officials and residents say prices for food and essential goods have doubled and even trebled.

“The international community simply cannot let eastern Aleppo city become yet another — and by far the largest — besieged area,” O’Brien said. “The clock is ticking.”

There are conflicting reports over an explosion in Kafrsouseh in central Damascus on Monday night.

A pro-regime site acknowledges a car bomb with about 150 kg (330 pounds) of explosive, but says that only two people were injured and no one was killed.

A “military source” said the target was a high-ranking officer working in State security.

However, pro-opposition outlets said the bomb, near an Iranian school, was targeting a dispatch center for Iranian forces. They say that ambulances rushed to the location, although claims on social media of 10 Iranians and Hezbollah killed and 60 injured were not accurate.

The outlets say that an Iranian officer in the intelligence branch was a casualty.