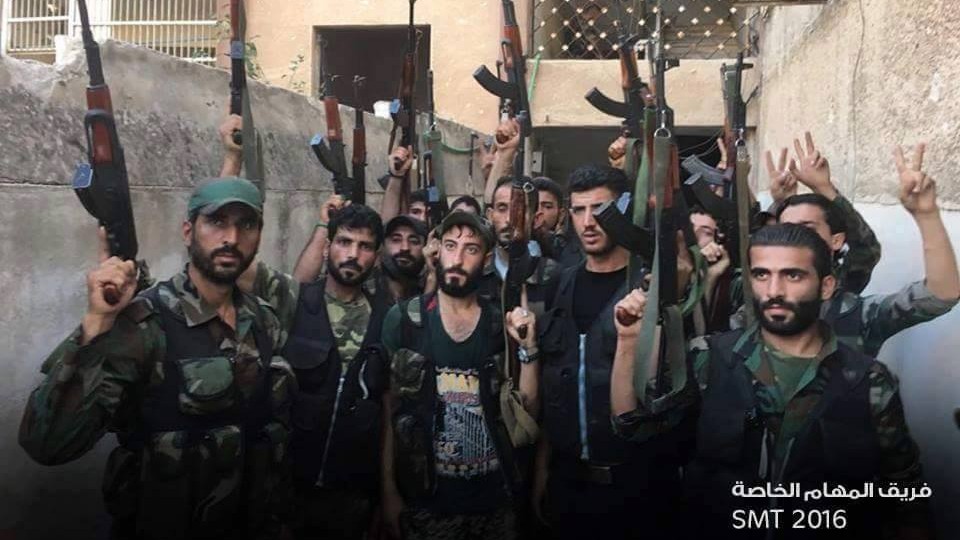 UPDATE 1720 GMT: A pro-opposition activist says pro-Assad forces have control of much of al-Mallah Farms, although rebels may have regained some of the territory lost since Wednesday night. The activist reports fighting is 1.5 km (less than a mile) from the al-Castello Road, which is closed because of shelling and airstrikes.

In this audio, a rebel fighter says that Russia and the Assad regime are “unleashing hell”, with “parachutes” — Russian bombs and possibly cluster munitions — “raining” on the al-Castello Road:

An overhead image of the devastated northern al-Mallah Farms, compared to the landscape in 2015:

UPDATE 1230 GMT: A spokesman for the rebel faction Nour al-Din al-Zenki has issued an update on the fighting in the al-Mallah Farms, north of Aleppo, in what he called the “biggest attack so far” on the area.

The spokesman said that the al-Castello road, the main route into opposition-held parts of Aleppo city, had been closed amid shelling and as pro-Assad forces closed on it.

However, the spokesman declared that rebels had regained “most of the points” taken by the Syrian military and the Palestinian al-Quds Brigade. He said that supply routes to the attackers in al-Mallah had been cut amid “violent battles”.

He said there had been heavy losses in defending al-Mallah, amid intense airstrikes, but the priority was to regain the rest of the lost territory.

A journalist for the pro-opposition Orient News said regime airstrikes and heavy shelling had almost closed the al-Castello Road and they have almost succeeded in blocking it. He said pro-Assad forces had captured five positions on the al-Mallah Front to bring the road within range of artillery.

Drone footage from an outlet connected with the regime military:

UPDATE 1000 GMT: Far from ceasing fire, the Syrian military and allied foreign militias have attacked overnight in al-Mallah Farms, near the last main route to opposition-held areas of Aleppo city.

Continuing the offensive started last week, the pro-Assad forces are hoping to cut the al-Castello road. They have advanced from the northern part of al-Mallah into the south, prompting a member of the rebel faction Fastaqim to tell Reuters, “(The road) was not risk-free, but now there is not a matter of danger. Now the road is cut.”

[A local source says there may be an error of translation. Rebels have closed the road as a military area because of shelling, but it has not been occupied by the pro-Assad forces.]

A second rebel official said: “All the factions sent reinforcements and are trying to take back the positions taken by the regime, but the situation is very bad — there was heavy regime air cover in the night.”

Pro-regime accounts say the offensive is now 2 km (1.2 miles) from the road, with one claiming this is a video of the route taken from a Syrian army position:

The rebel faction Nour al-Din al-Zenki says the attackers took a “few positions”, enabled by Russian airstrikes, but a counter-attack is underway.

A photo from Nour al-Din al-Zenki of its defense: 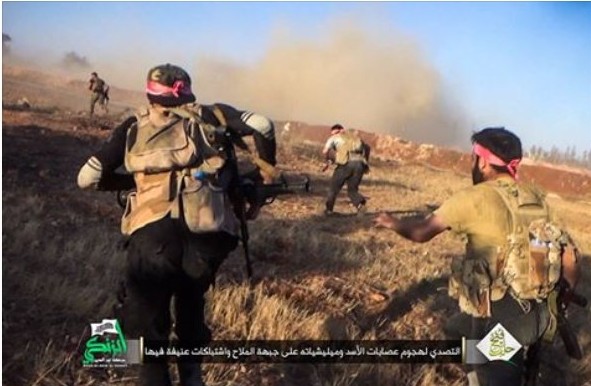 ORIGINAL ENTRY: The Syrian military suddenly announced a 71-hour ceasefire on Wednesday; however, pro-Assad forces reportedly continued air and ground attacks in part of the country.

The military said the ceasefire, marking the celebration of Eid at the end of the holy month of Ramadan, had begun at 1 a.m. Wednesday and would continue until midnight Friday.

Even as the announcement was made, pro-regime accounts were claiming that the Syrian army captured Maydaa in the East Ghouta region near Damascus, and that rebels were killed in an ambush in Daraa Province in southern Syria.

On Thursday morning, the pro-regime al-Mayadeen claimed that the Syrian army had finally taken the southern part of the al-Mallah Farms, north of Aleppo city.

The pro-opposition Local Coordination Committees said several regime troops were killed trying to advance on the Handarat camp, to the east of al-Mallah.

There was a drop in civilian casualties on Wednesday, with an apparent reduction in airstrikes. The LCC reported that “only” 33 deaths were documented across Syria yesterday.

Rebels said they would respect the truce for the Eid celebrations, but only if pro-Assad forces adhered to it.

A Halt to the Aleppo Offensive?

If maintained, the ceasefire will be a pause in the Assad regime’s latest attempt to advance north of Aleppo, closing off the last main route into opposition-held parts of the city.

The Syrian military put elite units, including the Tiger Forces, and Iraqi and Palestinian militias into the effort to take the al-Mallah Farms near the al-Castello Road.

The offensive, which began almost a week ago with the cover of Russian airstrikes, has taken some territory but has been unable to establish control across the Farms.

Syrian troops in the northern part of al-Mallah:

Despite the failure to complete the task, the regime may have called the ceasefire to check rebel pressure elsewhere in northwest Syria. In recent weeks, the anti-Assad forces have regained territory in Latakia Province, including the key town of Kinsabba.

Last week, the US Government sent a proposal to Moscow suggesting coordinated operations against the jihadists of Jabhat al-Nusra as well as the Islamic State, provided Moscow stopped bombing “moderate” rebels. Some American officials also suggested that Russia might be encouraged to press for President Assad’s eventual departure from power.

The Kremlin said on Wednesday evening:

Both sides have confirmed their readiness to increase military cooperation between Russia and the US in Syria. It is also important to resurrect the UN-mediated peace talks to arrive at a political solution of the crisis.

The statement continued, “Vladimir Putin called on his counterpart to separate, as soon as is possible, the definitions of moderate forces from al-Nusra and other extremist groups.”