Britain Q&A: The Arsonist Flees — Brexit and the Departure (Maybe) of Nigel Farage 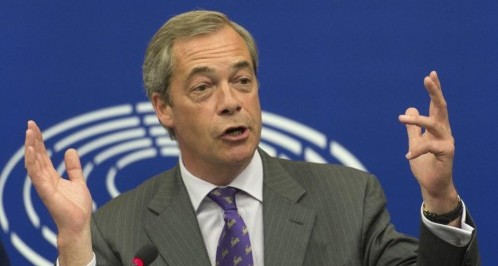 PHOTO: Nigel Farage — “Having helped cause this crisis, Farage is now running from it. For now.”

Amid the political furor after the UK’s June 23 vote to leave the European Union, one of the most controversial voices for Brexit, the UK Independence Party leader Nigel Farage, has announced that he is stepping down to spend more time with his family.

I am not so sure. Farage has resigned in the past, only to soon un-resign. And the biggest bankroller of the Leave campaign, billionaire Arron Banks, has said that he envisages a new party which is distinct from UKIP.

Meanwhile, the Spanish newspaper La Razon has published my interview with them about Farage and the immediate future:

How will Farage´s resignation affect the turmoil in British and European politics?

Despite all the noise about the UK Independence Party, Farage is still marginal to the political decisions, which rest more with the established parties.

However, his resignation will add to the atmosphere of uncertainty. The Conservatives are already selecting a new leader, who will be Prime Minister. Labour is likely to be choosing a new leader soon. No one has a plan for a Brexit, or even an idea if or when the UK will invoke Article 50 to leave the European Union.

Having helped cause this crisis, Farage is now running from it — for now.

What´s behind this decision?

In one sense, Farage is claiming “victory” by leaving now. He will not have to deal with the hard questions of the next few months, with the UK likely to be in an economic downturn and political confusion.

However, do not rule out a return to politics soon. The billionaire Arron Banks, who provided more than $5 million to the Leave campaign, has proposed a new party distinct from UKIP. Could Farage be its new leader?

Does this situation prove that false arguments were used during the Brexit campaign in order to gain votes?

We did not need Farage’s resignation to know that the Leave campaign was based on distortions and falsehoods. From the evasion of economic reality to the untrue claims about the UK’s contributions to the European Union to the already-discarded promises that money will go to public services, farming, and regional projects, Brexit has been based on “if you going to lie, make it a big lie”.

Farage’s announcement merely confirms — following the departure of both Prime Minister David Cameron and former Mayor of London Boris Johnson — that the prominent politicians responsible for this self-inflicted crisis are quite happy to abandon their responsibility for it.

In what way is this resignation a blow for Euro-scepticism in Europe?

Farage is loud, but in the end, he is a blowhard who is not central to Euro-scepticism. That movement will rise or fall not only on developments in the UK, but on a series of local situations in countries across Europe.

Who is likely to take control of UKIP now?

Douglas Carswell, UKIP’s lone MP, has said he will not stand to become leader.

Suzanne Evans is seen as an effective campaigner and may have an advantage with an appeal to women, but she is currently suspended from the party and considered very right-wing — again, a possible problem with crossover Labour supporters.

Paul Nuttall, the Deputy Leader, has a working-class background which could do well with the Labor vote, especially in the north. But is he too left-wing for UKIP’s base?

Steven Woolfe could make his case on the basis of handling the party’s portfolio for migration and financial affairs.

Other names to watch are Diane James, a UKIP MEP, and Patrick O’Flynn, former political editor of The Daily Express.

Is this a “liberation” for the British politics or the opposite?

There is no “liberation” in UK politics, despite the posturing of Farage and Boris Johnson that this is “our Independence Day” — a ridiculous statement for a country which has been sovereign for more than a millennium.

There is no freedom in recent events, merely the prospect of a burden of economic, political, and social crises and divisions that could last for many years if this decision is not reversed.