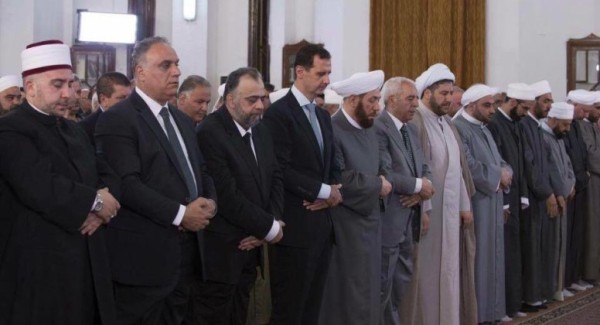 PHOTO: President Assad in a Homs mosque on Wednesday for prayers at the end of Ramadan

Even as its attacks continue in parts of the country, the Syrian military has declared a 71-hour ceasefire for the end of the holy month of Ramadan.

The military said that the ceasefire had begun at 1 a.m. on Wednesday and will continue until midnight Friday.

Rebels said they would respect the truce for the Eid celebrations, but only if pro-Assad forces adhered to it. Mohammad Alloush, a senior official with Jaish al-Islam, said on Twitter:

We, the armed revolutionary groups in Syria, welcome any effort towards a ceasefire for the happy Eid al-Fitr period. We declare we will abide by it so long as the other side does the same.

Until now, [the regime] has not abided by what it has announced, in that it has launched a number of attacks in various areas today.

Supported by Russian airstrikes, the Syrian military and allied foreign militia have been trying to advance north of Aleppo, closing off the last main route into opposition-held parts of the city.

Regime supporters also claim that the Syrian army has captured Maydaa in the East Ghouta region near Damascus. The supporters added that “several rebel fighters [were] killed and wounded [and 3 others arrested” in an army ambush in Daraa Province in southern Syria.

Pro-opposition outlets said Syrian warplanes carried out at least eight air raids on Kafr Hamra and Hreitan in Aleppo province. They added that helicopters barrel-bombed the Bani Zeid neighborhood of Aleppo city, where pro-Assad forces have been fighting rebel factions.

#Assad barrel bombs on Haritan in #Aleppo countryside on the first day of Eid al-Fitr#Syria pic.twitter.com/ybeY94JQCh

Three people were reportedly killed by an airstrike as they left Eid prayers in the al-Mashhad district of Aleppo city.

The spokesman of Jaish al-Islam, Islam Alloush, said, “The regime has made this announcement purely to escape international pressure. On the ground, I don’t think anything has changed.”