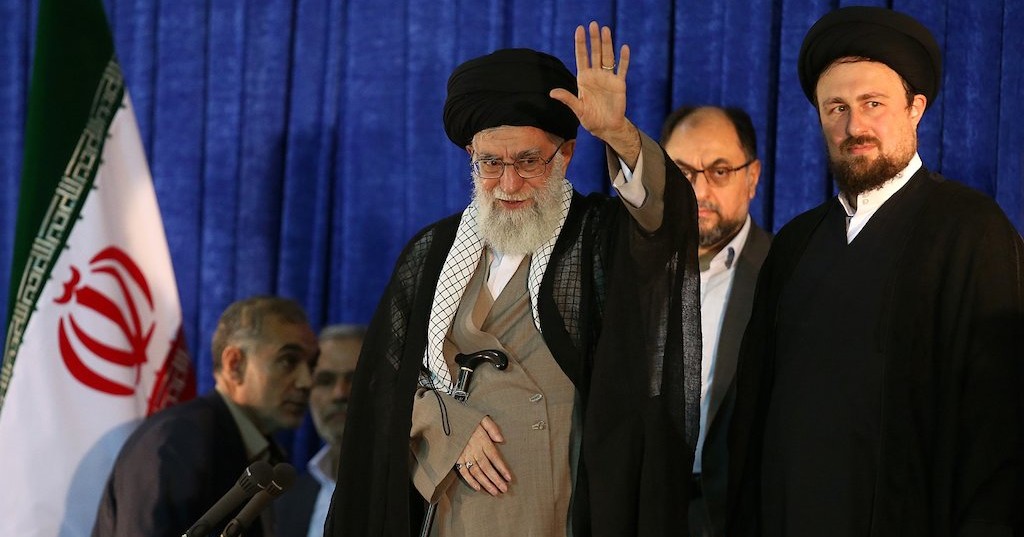 In ceremonies in Tehran, Iran’s Supreme Leader has called on Iranians to preserve their “revolutionary spirit” and confront the US and Britain.

Ayatollah Khamenei was speaking on the 27th anniversary of the death of the Islamic Republic’s founder, Ayatollah Khomeini: “We have many small and big enemies, but foremost among them are America and this very evil Britain.”

Nuclear talks experience shows even if we compromise, US won’t stop its destructive role. Iran fulfilled its obligations but US is disloyal.

Perhaps more importantly, Khamenei appeared to send a message to those inside Iran whom he considered foes, “Any individual or current which is working for Islam, if they trust America, they will be slapped in the face.”

Any person or movement working in name of #Islam, if trusts the U.S. has committed a great mistake and will suffer its consequences;

He warned Iranians not to waver in support for the regime, “Wherever our movement was revolutionary, we succeeded but when we ignored (the revolution), we fell behind.”

The Iranian establishment is still beset by in-fighting, amid success for the centrist-reformist bloc — linked to President Rouhani — in recent Parliamentary elections.

Supported by the Supreme Leader, conservatives and hardliners continue to block Rouhani’s attempt to open political and cultural space and to curb the powers of institutions such as the Guardian Council, which disqualified thousands of candidates before February’s elections.

The Government maintains influence through its oversight of the economy, seeking recovery after years of US-led sanctions over Iran’s nuclear program. However, Khamenei warned in late March that he could take the economic responsibility away if Rouhani and his Ministers showed weakness before the US.

President Rouhani was more measured than the Supreme Leader in his remarks on Friday: “The magnanimous Imam [Khomeini] rose and braved all the world’s arrogant powers at a time of darkness and historical suppression in Iran.”

This weekend’s ceremonies have an added political edge because of the role of Khomeini’s grandson Hassan. An ally of Rouhani and former President Hashemi Rafsanjani, he was blocked by the Guardian Council from standing for the Assembly of Experts in February.

Khomeini avoided any controversial remarks about the domestic situation in his speech, saying that Iranians should be thankful for the gift of security and unity from the Islamic Revolutionary. He also criticized Israel as the “cancerous tumor of the Islamic world” and “the most wicked and bitter entity”.

Military Commander to Clinton: “We Are Ready for Decisive Confrontation”

Iran’s deputy head of armed forces has warned US Presidential hopeful Hillary Clinton that Tehran is ready for a “decisive and difficult confrontation” with America.

General Massoud Jazayeri was responding to Clinton’s statement on Thursday that, despite the July 2015 nuclear agreement, “The world must understand that the United States will act decisively if necessary, including with military action, to stop Iran from getting a nuclear weapon.”

Although talk of all options being on the table against Iran is a propaganda show in the United States, the Islamic Iran is prepared for a decisive and difficult confrontation with any American option.

Our nation and armed forces have never sought a war, but they have not neglected their defensive preparation for a moment.

In case the American military threats are implemented, [Iranians] are ready to rid humanity of the evil of America’s warmongering and hegemonic policies in a real and direct battle.

Boosted by unexpected success in Parliamentary elections, Iran’s reformists have declared further advance with the selection of two of their choices as Deputy Speakers of Parliament.

Earlier this week, Ali Larijani — initially a member of the conservative bloc, but a pragmatist who has put some distance between himself and the main group — was re-elected to the Speaker’s chair that he has held since 2008.

Larijani triumphed over leading reformist Mohammad Reza Aref. However, in a sign of the balancing of Parliament, following more than a decade of conservative domination, reformist Masoud Pezeshkian was named 1st Deputy Speaker. Ali Motahari — a “maverick” conservative who has broken with the bloc amid his repeated criticisms of regime policies, including over political prisoners — was chosen as 2nd Deputy Speaker.

Despite the Guardian Council’s disqualification of thousands of their candidates, the centrist-reformist List of Hope surged in both the first-round and run-off elections to become the largest faction in Parliament. The victory has helped bolster President Rouhani in regime in-fighting with hardliners and conservatives.

The triumph was also significant for reformists, many of whom have been imprisoned or harassed since the mass protests after the disputed 2009 Presidential elections. Major reformist parties were suspended, and communications were restricted.

Senior reformist Hossein Marashi said on Thursday that the faction “met their goals” of eliminating hardliners and anti-Government MPs, replacing them with List of Hope members. He said the election of five reformist-backed candidates, including Pezeshkian and Motahari, to the 12-member Parliamentary Presiding Board rebuffed hardline claims that the election showed reformists are only in a “clear minority” in the Majlis.