Syria Daily: UN Retreats on Aid Airdrops, Will Proceed Only With Assad’s Consent

UPDATE 1215 GMT: The Assad regime is still withholding agreement for an aid convoy to enter the besieged town of Daraya, UN officials have said.

“The blockage of aid is a political issue,” UN spokesman Ahmad Fawzi said.

The Syrian military has cut off Darayya, 12 km (7.5 miles) southwest of Damascus, since November 2012. The regime allowed a token delivery of aid last week as a UN deadline for assistance loomed; however, the trucks carried no food and packages were half-empty, possibly because items such as medical supplies were taken before the convoy arrived in the town.

A second convoy was planned for last Friday, but has been delayed indefinitely because the regime has not given approval.

But the convoy took no food to Daraya, where the U.N. has said malnourished children will die without outside help. U.N. officials had hoped food would arrive in a second convoy on Friday, but that was delayed with no government approval.

Activists say there are still 8,000 people in Darayya.

ORIGINAL ENTRY: The UN has retreated on a pledge to airdrop aid to Syria’s besieged areas.

Having passed a June 1 deadline to begin assistance, the organization said on Monday that the Assad regime has until June 10 to respond to a request for access by land.

Even more significantly, spokesman Stephane Dujarric said that, if there is no reply, the UN will ask for airdrops — but will not proceed if the regime refuses: “The UN will request approval for access by air wherever this is feasible to reach people in need, as a measure of last resort.”

In mid-May, with the Assad regime tightening blockades on opposition-held areas, the International Syria Support Group — 17 countries such as the US and Russia, the UN, the European Union, and the Arab League — mandated the World Food Program to begin airdrops by June 1, whether or not Damascus agreed.

The head of UN humanitarian operations, Stephen O’Brien, told the Security Council that a formal request for Syrian permission to begin airdrops and air bridges would be delivered on Sunday. However, the approach was never made — instead a letter asked for permission to ground convoys to deliver food and medicine to 34 areas, including 17 besieged towns.

The regime briefly opened access to some areas after a now-collapsed February 27 “cessation of hostilities”, but renewed the restrictions in April and May, with the UN able to reach only 5% of hard-to-reach civilians. Both O’Brien and Jan Egeland, the UN’s head of Syrian operations, warned of an imminent crisis including the starvation of children.

The UN says at least 592,000 Syrians live under siege conditions. Activists say the number is far higher, with the international medical organization Medecins Sans Frontieres saying it could be close to two million.

A UN humanitarian organization has said a Kurdish-led offensive to capture the Islamic State’s main position in Aleppo province could displace about 236,000 people.

The Office for the Coordination of Humanitarian Affairs said 20,000 people had already fled areas near Manbij as the Syrian Democratic Forces surrounded the city on three sides.

The OCHA warned that civilians would “face impediments” to their movement and critically needed shelter, drinking water, food, and health care.

The agency said a pro-Assad offensive moving into ISIS-held areas of Raqqa Province, such as the Taqba airbase, could spur further displacement.

A spokesman for the Syrian Democratic forces claims on Monday that ISIS militants were fleeing Manbij with their families, as the SDF advanced to within 6 km (3.7 miles).

Footage of a Jaish al-Fatah vehicle bomb destroying an Iranian ammunition depot during the rebel advance east of Khan Tuman near the Aleppo-to-Damascus highway.

#Syria #Aleppo
Video:
Rebels in #khan_tuman blow up IRGC command center with a VBIED
Many Irani Officers wiped out pic.twitter.com/HyavMjGug2

Assad: “We Will Liberate Every Inch of Syria”

In a speech to Parliament, broadcast on State TV, President Assad has dismissed any notion of political compromise — even though that means more deaths:

Assad used the recapture of the historic city of Palmyra in late March from the Islamic State to promise victory over all opponents:

The bloodshed won’t end until terrorism is uprooted no matter where it is and regardless of the masks it wears.

Our war against terrorism is continuing. As we liberated Tadmur [Palmyra] and before it many areas, we will liberate every inch of Syria from their hands. Our only option is victory, otherwise Syria will not continue.

The President indicated that the regime had successfully blocked the international community’s attempt at a political resolution through talks in Geneva between January and April, rejecting the central proposal of a transitional governing authority:

It is no longer secret that the essence of the political process for the regional and international countries supporting terrorism has been, since the beginning and throughout the various initiatives, aimed at undermining the presence of any concept of the homeland through hitting its core, which is the constitution, and through continuous pressure to consider it null and stop it and freeze it under different names and terms, mainly the so-called transitional stage….

Our answers were decisive and we didn’t allow them to pass any terms.

When they failed to achieve what they wanted, their response was an open declaration of supporting terrorism and withdrawing from the cessation of hostilities agreement.

They believed that the core of their political scheme after their plot of terrorism failed was to hit the constitution, and thus creating chaos….

The sectarian regime turns the people of a homeland into adversaries, and that’s when the imperialist states put themselves forward as rulers of the groups inside the homeland.

Aleppo Hospitals: We Have No More Body Bags

Amid continued Russian and regime attacks, hospitals in opposition-held parts of Aleppo city have put out a notice that they have run out of body bags. 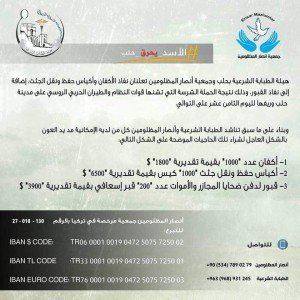 The surge in Russian and regime airstrikes on Aleppo Province continued on Monday — footage from Kafr Hamra:

The Local Coordination Committees said that 38 of Monday’s 94 confirmed deaths were in Aleppo Province, mainly in Kafr Hamra and the Kalaseh section of Aleppo city.

Another 34 people died from attacks on Islamic State-held areas of Deir ez-Zor Province in eastern Syria.

Maintaining its practice of denying any responsibility for attacks on civilian areas, Russia’s Defense Ministry denied reports that it bombed a market.

“Russia’s air group performed no combat missions, neither did it deliver strikes in the city of al-Asharah in the Syrian province Deir ez-Zor,” said spokesman Igor Konashenkov.

Russian and regime strikes have escalated since last week across northwest Syria, killing hundreds of civilians, especially in Idlib and Aleppo Provinces.

Russian Foreign Minister Sergei Lavrov indicated on Monday that the attacks would continue, using the pretext that rebels — and presumably civilians — had not “separated” from the jihadists of Jabhat al-Nusra, who are not covered by the February cessation of hostilities: “The United States knows that we will provide the most active air support for the Syrian army in order to prevent terrorists from capturing territories.”

Aftermath of a barrel-bombing in Aleppo city: