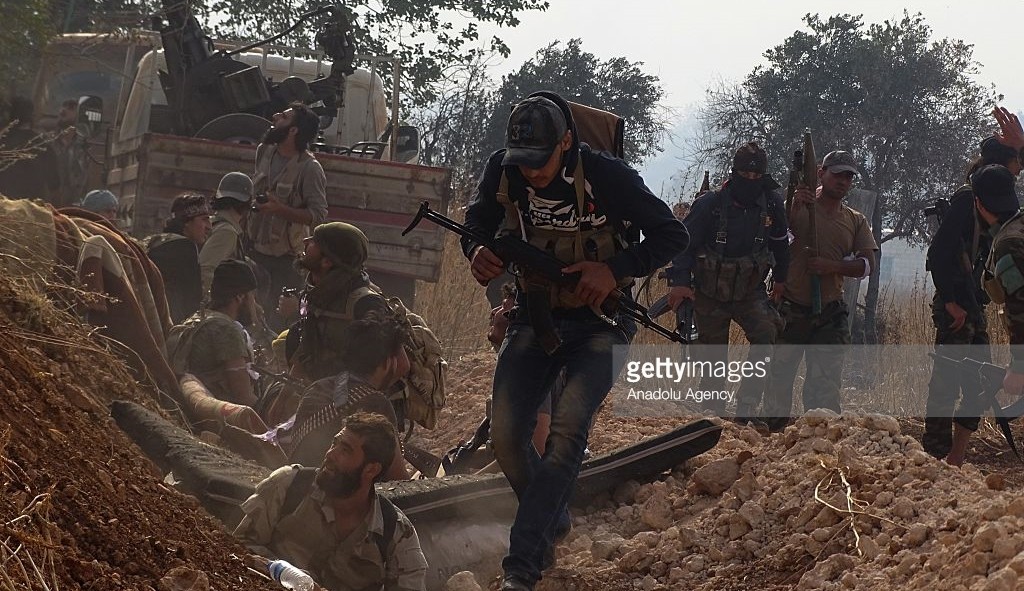 PHOTO: Fighters from the Jaish al-Fatah rebel bloc on the southern Aleppo front

In a sudden offensive on Friday, the Jaish al-Fatah rebel bloc overran Iranian forces and Iranian-led Iraqi and Afghan militia east and south of Khan Tuman, close to the Aleppo-to-Damascus highway.

On the frontline with rebels:

The rebels and the jihadists of Jabhat al-Nusra. succeeded despite, in the words of one local source, “Insane air attacks on the battlefield. Russia and regime deploying everything that can fly.”

Video has been posted of slain pro-Assad fighters. Others are of captured troops.

Rebels may now try to open a 5-km (3-mile) corridor from the front to Aleppo city:

5 kms long corridor can be opened from Ma'raata to Ramouseh to link rebel areas in Aleppo city with the countryside pic.twitter.com/wUceRlfZJ2

Syrian and Iranian State media have ignored the developments, but pro-regime outlets have acknowledged the losses.

At the start of April, Jaish al-Fatah captured the town of al-Eis on the Aleppo-to-Damascus highway. In early May, they moved into Khan Tuman, overrunning the Iranian-led units and inflicting scores of casualties. The Iranians and foreign militias lost more troops in subsequent failed attempts to retake the town.

Rebels have now regained most of the territory lost in southern Aleppo since last autumn’s Russian aerial intervention, accompanying a regime-Iranian-Hezbollah ground offensive.

There are few, if any, Syrian Army units on the frontlines now. The regime is concentrating its forces on an offensive against the Islamic State which entered Raqqa Province in northern Syria on Friday.

Claimed drone footage of the rebel-Nusra advance into the village of Humayra:

First-person footage of the fighting: 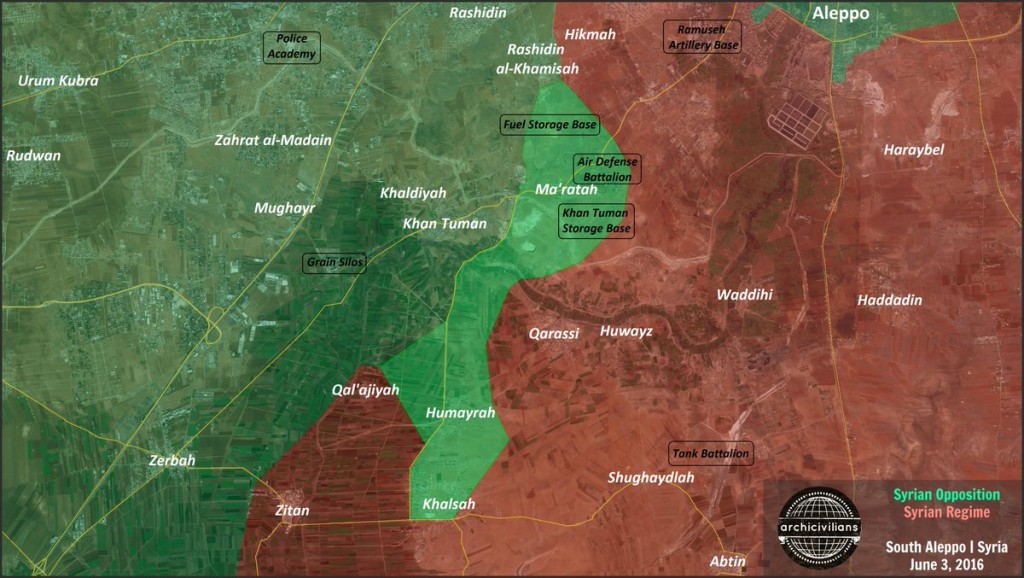 The rebels claims at least three Iranian officers were killed.

Russia: US Asked Us Not to Attack Jabhat al-Nusra

In the latest propaganda line for its airstrikes on both civilian areas and rebels in and near Aleppo city, Russia has declared that the US asked Moscow not to attack the jihadists of Jabhat al-Nusra.

Foreign Minister Sergei Lavrov said in a Friday interview, following a phone call with US Secretary of State John Kerry, “They are telling us not to hit [Jabhat al-Nusra], because there are also ‘normal’ opposition groups [in these areas].”

Jabhat al-Nusra and the Islamic State are excluded from a February 27 cessation of hostilities agreement. The arrangement, brokered by the US and Russia, has collapsed in much of Syria.

Russia has threatened the renewal of an all-out campaign against rebels in recent weeks. Defense Minister Sergei Shoigu initially said the assault would begin May 25, and Moscow indicated earlier this week that the attacks would begin on Friday.

Russian warplanes have bombed civilian sites in recent weeks, including a refugee camp on the Turkish border and the National Hospital in Idlib city. This week Moscow and the Assad regime have stepped up attacks across Aleppo, Idlib, and Hama Provinces.

However, despite the strikes, rebels and Jabhat al-Nusra have advanced again on the front south of Aleppo city.

The Local Coordination Committees documented the deaths of 108 people on Friday, including 27 women and 13 children.

Amid Russian and regime airstrikes, 80 of the victims were in opposition-held areas of Aleppo Province. Another 16 were killed by Russian strikes on an Islamic State-controlled village in Deir ez-Zor Province.

Following advances by the Kurdish-led Syrian Democratic Forces against the Islamic State in northern Syria, regime forces have launched their own offensive into Raqqa Province.

Backed by Russian airstrikes on the Hama-Raqqa border, the Syrian military entered the province for the first time since 2014 on Friday.

The army claimed an advance of about 20 km (13 miles) and the capture of its first village, Abu Al-Allaj, in Raqqa. It said it was 35 km (22 miles) from the Tabqa airbase.

Earlier this week, the SDF launched its assault on the Islamic State’s main position in Aleppo Province, the town of Manbij.

UN to Ask Assad Regime’s Permission for Airdrops of Aid

The UN Security Council has again urged the Assad regime to permit aid into besieged areas.

The head of the UN’s humanitarian operations, Stephen O’Brien, told the Security Council that approval would be requested on Sunday.

The International Syria Support Group — made up of 17 countries such as the US and Russia, the UN, the Arab League, and the European League, had mandated the World Food Program to begin airdrops by June 1 if the regime continue to block access. However, UN envoy Staffan de Mistura backed away from the commitment last week, saying the Assad regime’s assent was necessary. UN officials reiterated the line on Thursday, citing issues of security, logistics, and expense.

Secretary of State John Kerry, who spoke with Russian Foreign Minister Sergei Lavrov by telephone on Friday, told reporters in Paris,
“The preference is to get it in by ground, and we’re still working on getting it in by ground.”

However, Lavrov dismissed any priority for assistance in an interview with Russian media on Friday:

Of course, it is vital to ensure humanitarian access to besieged settlements, it is also vital to observe the ceasefire regime and prevent violations, it is likewise vital to launch political process stymied by the radical opposition which refuses to sit down at the negotiating table and keeps on advancing preliminary conditions.

But however important these things might be, terrorism is a common threat and most of our Western partners admit in our contacts that there should be no excuses to delay the defeat of Islamic State and Jabhat Al Nusra which is trying to merge with other groups.

I'm a bit aghast at how ridiculous UN position on airdrops is. You're asking permission from besieger to allow aid to places it's besieging?

The regime briefly relaxed the sieges after a February 27 cessation of hostilities which has now broken down; however, in April and May, it tightened the blockades.

O’Brien said the UN only reached two of 19 besieged areas by land in May, aiding only 20,000 people — about 3.4% of Syria’s besieged population, according to the UN.

The World Food Program has been able to airdrop some aid into regime-controlled Deir ez-Zor Province in eastern Syria, where civilians have been cut off by the Islamic State. Russian and Iranian cargo planes have also delivered assistance to Deir ez-Zor and to regime enclaves north of Idlib city in northwest Syria.

The regime’s UN Ambassador Bashar Ja’afari refused to respond when asked if airdrops would be permitted into opposition-held territory. He maintained “terrorists” were blocking the assistance: “If the Syrian government did not cooperate with the U.N. with regard to humanitarian aid, millions of Syrians would have died.”

Apparently trying to deflect pressure, Damascus said on Thursday that it would approve aid convoys into 11 besieged areas. However, apart from a delivery to the Damascus suburb of Moadamiya — which accepted regime conditions in principle earlier this week over removal of barricades, trenches, and rebels from the town — there has been no sign of assistance.