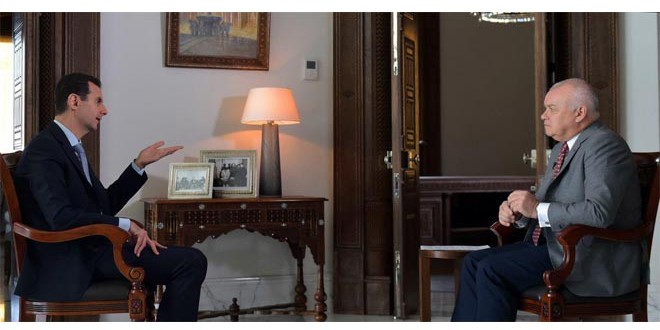 UPDATE 1800 GMT: In a further extract from his interview with Russian outlets, President Assad has rejected the transitional governing authority sought by political negotiations.

There is nothing, neither in the Syrian constitution nor in any other constitution in the world, called a transitional body. This is illogical and unconstitutional. What are the authorities of this body? How shall it run the daily affairs of the population? Who oversees its performance?

Assad proposed instead that a “National Unity Government” be established from “opposition, independents, the present government, and others”.

The President did not define how this government would be established. Instead, he dismissed the immediate possibility of talks with an “opposition”:

The West, or some countries, particularly Saudi Arabia, want to reduce all the other side to the Riyadh opposition, which includes terrorists. So, there should be a single image for the opposition. This doesn’t exist.

Then [when it exists], we negotiate with them over a constitution.

Assad also rejected a resolution based on federalism, proposed by his ally Russia last month and put forward by a conference led by the Kurdish Democratic Union Party (PYD) two weeks ago.

The idea of federalism is not a general proposition in Syria; and I don’t believe that if it was put to the vote, will be endorsed by the Syrian people.

ORIGINAL ENTRY: President Assad has said that last weekend’s victory over the Islamic State in Palmyra, in central Syria, will help secure his position.

Assad told the Russian State outlets RIA Novosti and Sputnik that the advance, enabled by Russian airstrikes and foreign forces, will “lead to the acceleration of the political solution” in talks in Geneva.

The second set of Geneva discussions adjourned last Thursday and are scheduled to resume on April 11. The Assad delegation is insisting that the President’s future cannot be negotiated.

In a convoluted extract from the interview, Assad said that the regime had been consistent in its approach to the talks, but that it would be bolstered by the end of the Islamic State’s 10-month occupation of the Roman-era city:

We didn’t change our stances, neither before the Russian support, nor after it….We went to Geneva and continue to show flexibility….

There are those who accuse us and Russia of [military action to forestall political talks], when trying to present Russia’s stance in countering terrorism as a support to the President or the Syrian government, and thus, as an obstacle in the way of the political process. Perhaps this could have been the case if we had not been flexible from the beginning, if we had really persisted. However, if you go back to the policy of the Syrian state five years ago, we responded to all the initiatives, without exception, coming from all sides, even if they were not true.

The full interview will be posted by the President’s office in two parts on Wednesday and Thursday.

The opposition-rebel High Negotiating Commission repeated on Wednesday that Assad’s fate must be resolved at the talks, criticizing a Russian statement claiming that the US now understood that this is not for consideration.

HNC spokesman Riad Nassan Agha asked, “What [is there] to discuss if we will not discuss the fate of al-Assad?”

He said the comments by Russian Deputy Foreign Minister Sergei Ryabkov were “intended to stop the process of negotiations”.

Moscow has given signals in the past month of a step back from unconditional support of Assad, but Russia publicly toughened its line last week after the visit of US Secretary of State John Kerry.

On another propaganda front, Russia has criticized Western “silence” on the recapture of Palmyra.

We are not so much surprised and disappointed by the position of Western colleagues as puzzled by their true intentions in regard to peaceful settlement in Syria. We thought that the delay of reaction from the Western capitals on Palmyra’s liberation was a coincidence. Now it is evident that this is part of a systematic approach.

A local pro-opposition journalist has said that Palmyra has been depopulated and almost destroyed by the fighting of the past year.

Mohammed Hassan al-Homsi told Syria Direct, “It has been totally leveled, and nothing remains except for ruins that point to the pulse of life that once was here.”

While there has been less damage than feared to antiquities in the Roman-era city, many buildings in Palmyra — home to a pre-war population of 70,000 — were demolished.

During the latest offensive by Assad forces, 4,000 civilians fled for the opposition-controlled areas in northwest Syria, while another 5,000 made their way south towards the Rajban refugee camp on the Jordanian-Syrian border, said al-Homsi.

“The situation of those who headed towards the Jordanian border is worse,” he said. “They’re living in a sparse desert, in extremely harsh conditions, and no one is presenting them with aid except the Qatari Red Crescent…which is giving very little, not enough to meet their needs.”

The journalist continued, “As for those who went north, we’re trying to coordinate with locals to give them shelter in houses and mosques…but poor people are the ones giving aid to begin with.”

In his latest report to the Security Council, UN aid chief Stephen O’Brien has cited an improvement in access to besieged Syrian areas but said that significant problems remain and “much more is required”.

O’Brien said 11 of 18 besieged areas — including the opposition-held Madaya and Zabadani in Damascus Province — have been reached since the beginning of the year. The Assad regime, which did not answer more than 75% of requests for access in 2015, is now replying within seven days.

But, despite the progress, aid convoys have only supplied 30% of people in besieged areas and less than 10% in hard-to-reach areas, according to O’Brien. The besieged opposition areas near the capital — Darayya, Douma, and East Harasta, “mere minutes’ drive away from UN warehouses in
Damascus” — are still cut off. The aid chief also is “deeply troubled” about more than 210,000 civilians in northern Homs Province and 15,000 in adjacent areas of Hama Province.

Even when we do gain access, serious concerns remain about the ongoing exclusion and removal of medical supplies and treatments from convoys. Over 80,000 treatments have been excluded or removed from convoys in 2016, the vast majority by the Syrian authorities. The range of removed
items is scandalous – from items to treat child malnutrition to medicine for preventing bleeding
after childbirth. There can be no possible justification for the removal of these or any other basic medical items….

Medical evacuations from besieged and hard-to-reach areas are also not being facilitated by the
parties to the extent that they should be….People continue to die unnecessarily as
a result….Similarly, medical workers are not getting the access they need to undertake proper medical assessments and treat patients.

Civilians are suffering as Islamic State-linked groups are fighting rebels in southwestern Daraa Province in southern Syria, according to local journalists.

Last week, Liwa Shuhada al-Yarmouk and Harakat a-Muthanna al-Islamiya broke out of a pocket to attack both the Southern Front and the jihadists of Jabhat al-Nusra and take control of several villages. Fighting continues in the Yarmouk Basin area bordering the Israel-controlled Golan Heights to the west and Jordan to the south.

We are on the brink of a humanitarian disaster. Food prices have spiked, there is no flour, and water has been cut off for more than a week due to the closure of the water turbine. Maintenance workers have been unable to make repairs to the water infrastructure because of the fighting.

All of the roads leading out of the Yarmouk Basin are cut off….Many of the residents are now living out in the open, on farms and in the plains.

The journalist says the situation has been compounded by Harakat a-Muthanna’s demolition of bridges and main roads to prevent the Southern Front and Nusra from advancing.

He said that about 23 civilians have been killed, including a family of five, and that Harakat a-Muthanna fired upon and dispersed a demonstration calling for an end to the fighting.

Unfortunately, nobody is evacuating the civilians, not even from areas of active clashes. We call on all the warring parties to keep civilians separate from this conflict, to open a safe road for civilians to leave and to allow medicine, children’s milk and food to enter, or else we’ll starve.

Journalist Hassan al-Muhammad added that Liwa Shuhadaa al-Yarmouk fighters have carried out arrest campaigns in the captured villages, calling with loudspeakers and posted announcements in the streets for any individual with connections to the Free Syrian Army to repent and announce allegiance to LSY.

Turkey has continued its crackdown on Syrian journalists with more detentions and bans.

Turkish authorities arrested Abd al-Salam Haj Bakri on March 21 in the southeastern city of Gaziantep. He is being held without charge and without access to a lawyer.

Bakri has worked for a number of outlets, including Al Jazeera, particularly in coverage of fighting in Latakia Province in northwest Syria.

Video and photojournalist Maher Akraa, previously arrested in January, has been deported and banned.

Turkey has detained a series of pro-opposition journalists amid tension on both sides of the Turkish-Syrian border. The arrests come amid a general restriction of press freedom, with the closure and takeover of broadcasters and newspapers and widespread imprisonment of journalists, by the Government of President Recep Tayyip Erdoğan.

Clashes Resume Between Kurdish YPG Militia and Rebels in Northwest

Clashes between the Kurdish YPG militia and rebels have resumed in northwest Syria.

Fighting was reported near Azaz, on the Turkish border. The rebel Sultan Murad Brigade posted a video of the destruction of a T-72 tank, reportedly involved in a YPG offensive.

The T-72 was one of four held by the YPG. Some activists said it was operated by a female crew.

The opposition website Eldorar said three civilians, including a woman, were injured amid YPG fire in Aleppo city. It also accused the Kurdish-led Syrian Democratic Forces in the Sheikh Maqsoud neighborhood of targeting civilians in the neighboring al-Hulk district and a main road into Aleppo.

The YPG and rebels have clashed for months in Aleppo city, each accused the other of attacks on civilians.

Last month fighting in Aleppo Province escalated, with a YPG offensive taking rebel territory all the way to the Turkish border. The advance was checked by Turkish artillery when the YPG tried to move into the important border town of Azaz, and the general cessation of hostilities in Syria followed on February 27.

Some Kurdish leaders have said that they want territorial unity between the Afrin canton in northwest Syria and the Kobane and Cezire cantons in the northeast.

The US backs the Kurdish-led SDF in the northeast in its fight with the Islamic State, providing weapons, ammunition, and special forces. There is no evidence of American assistance to the YPG in the northwest.

Reports circulated on Wednesday that a prominent regime commander, Mihrac Ural, has been killed by rebels.

Ural, a Turkish Alawite with Syrian citizenship, has been accused of a series of abuses and mass killings during the conflict. Among them is the execution of at least 100 people — including families, women, and children — in Baniyas in western Syria in May 2013. 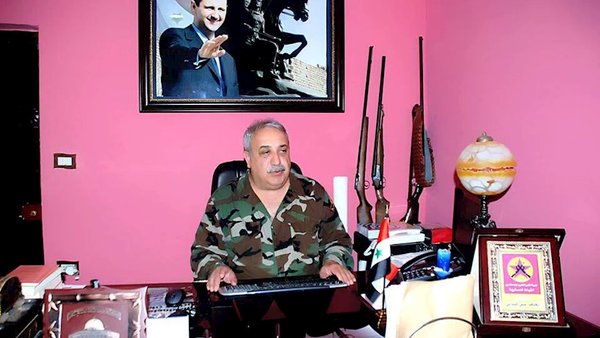