Monocle 24: Why Palmyra is Not Quite “Assad’s Victory” 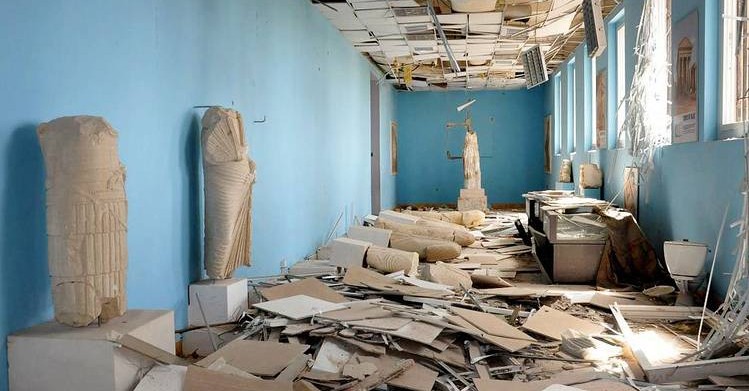 PHOTO: Damage in the Palmyra Museum

I spoke with Monocle 24’s The Globalist on Tuesday morning about the recapture of Palmyra in central Syria by pro-Assad forces.

The discussion was an opportunity for a reality check about the developments:

1. The defeat is not a “mortal blow” to the Islamic State, as claimed by the Syrian military. ISIS continues to hold the cities of Raqqa and Mosul and territory, including oil and gas fields, across Iraq and Syria.

However, this is a “steady erosion” for th Islamic State, beset on all sides. For months, it has been pushed back by a US-supported Kurdish-led force, and it is fighting rebels in northern Aleppo Province. Now — after a de facto non-aggression arrangement with the Syrian regime dating back to early 2014 — it is facing Russian airstrikes and a ground offensive by Hezbollah, Iran’s Revolutionary Guards, and Iraqi and Afghan militias as well as the Syrian Arab Army.

2. This is not quite “Assad’s victory”, as proclaimed not only by Damascus but also by some Western outlets. It was the regime and Syrian military that lost Palmyra in May 2015, as President Assad faced collapse amid rebel and ISIS advances.

On its own, the Assad regime could not have regained the city. Only the Russian intervention and significant foreign assistance on the ground opened up the possibility.

3. Commentary in much of Western media has abetted Assad with diversionary and ill-informed statements propping up his claim to legitimacy.

That diversion has included assertions of Assad “saving” Palmyra’s historic culture while ignoring the deaths and damage wrought by the regime for five years. A particularly nasty example is the “Bravo for Assad” shouted by the Mayor of London, Boris Johnson, in an opinion piece on Sunday.

The “cultural meaning” is being used to say, “Isn’t it wonderful what Assad has done?”

To simply celebrate the defeat of one evil…by backing another regime that has blood on its hands? The biggest casualty of this war has been the hundreds of thousands of Syrians who were killed.