UPDATE 1430 GMT: Martin Rowson of The Guardian portrays President Assad’s “victory”, boosted by Russia’s Vladimir Putin, atop the skulls of the Syrian people. Meanwhile, the US and Europe look away. 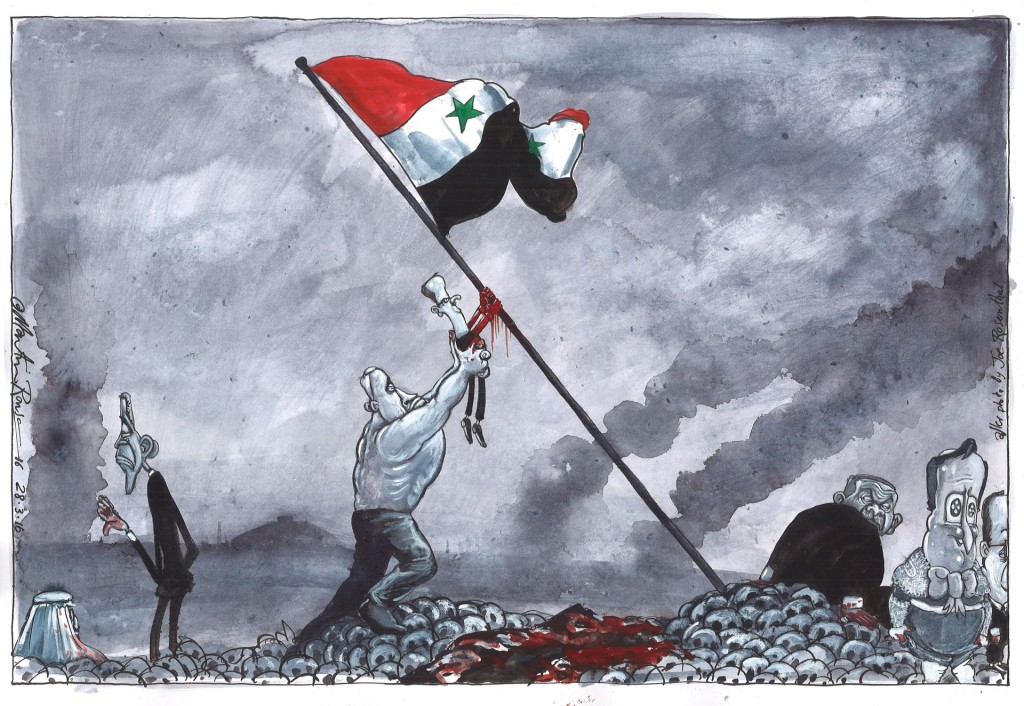 ORIGINAL POST: Boosted by the defeat of the Islamic State in the ancient city of Palmyra in central Syria, the Assad regime tried to use the victory on Sunday as leverage for international acceptance.

Enabled by Russian airstrikes and accompanied by Hezbollah, Iran’s Revolutionary Guards, and foreign militias, the Syrian military took control of Palmyra after an offensive that began in February.

Regime supporters proclaimed that more attacks would follow, to the east towards the Islamic State’s positions closer to the Iraqi border or to the north towards the ISIS center of Raqqa.

However, the regime concentrated on Sunday on statements hailing the defeat of “terrorism”. State media said Russian President Vladimir Putin phoned Assad and “congratulated him on recapturing Palmyra city from terrorists”.

The reports said Assad thanked Putin for Moscow’s support and “affirmed that the Syrian army’s determination, coupled with the effective support of the Russian air force, have yielded this great achievement for Syria and humanity”.

State media also headlined Assad’s visit with a French delegation, including far-right politicians and activists. The President said the advance showed the Syrian military and its foreign allies are far more effective than the US-led coalition, with “its lack of seriousness in fighting terrorism and the very little it has achieved”.

Regime propaganda is emphasizing to the international community that the Syrian military is essential for the defeat of the Islamic State. Amid political talks in Geneva, the goal is to set aside any consideration of President Assad’s departure in a transitional governing authority.

On Sunday, State media declared that Assad’s focus was on “national reconciliations, reconstruction, and rebuilding”, rather than consideration of his future.

Footage from a reporter, Eyad al-Hosain, embedded with the regime forces: