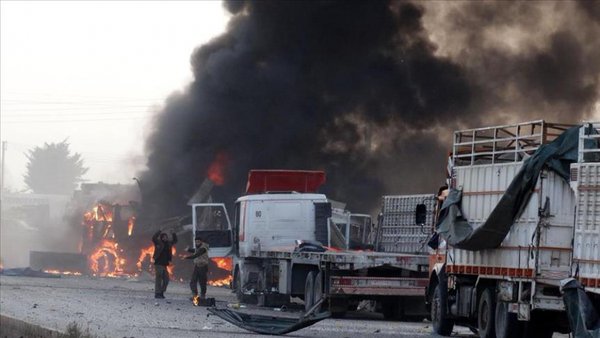 The UN and aid organizations are warning that Russian bombing has added to a humanitarian crisis in northern Syria.

The aid agency Mercy Corps, one of the largest providers of food aid in the area, says that Russian airstrikes from September 30 have cut its assistance by 80%.

“This is an emerging humanitarian crisis. There is extreme suffering, and people are not being protected,” said Rae McGrath, the Corps’ director for Turkey and north Syria. He added:

We’re also seeing a huge increase in the number of civilian casualties. More and more people are being hurt because the intensity of bombing is greater. It’s hard to imagine that the conditions in Syria could have become worse than they already were, but they have.

A UN official in southern Turkey said Russia’s intervention and the regime ground offensives that Moscow supported have displaced about 260,000 people. Because Turkey has limited entry amid pressure to restrict the flow of refugees to Europe, many of those fleeing have had to set up makeshift shelters inside Syria.

UN and aid officials said that the Russian attacks are frequent and systematic enough to suggest that infrastructure is being deliberately targets. Among the facilities struck are a grain silo that supplied wheat to Idlib Province, 10 bakeries that collectively catered to at least 200,000 people, several mills and warehouses that stored flour, and a water treatment plant serving 1.4 million people, according to a UN report. In an area of Aleppo province controlled by the Islamic State, a water treatment plant was bombed, and 1.4 million people are without water.

Pablo Marco of the international organization Medecins Sans Frontieres confirmed its report that 12 hospitals have been hit.

“Of course it is impossible for us to have certainty, but the frequency with which bombs are falling in hospitals or very close to hospitals is enough to make it really seem that, yes, they are targeting hospitals,” he said.

The UN official confirmed that a truck hub the Turkish border crossing at Bab al-Salameh was struck three times in five days, halting aid supplies and commercial deliveries of food, fuel, and other essentials.

“Of course it was deliberate,” the official said. “This was very specific targeting.”

Jan Egeland, the Secretary General of the Norwegian Refugee Council, which has suspended its aid operations, summarized:

Civilians have been left with nowhere safe to flee. Schools, markets and bakeries are being bombed and women and children are under fire.