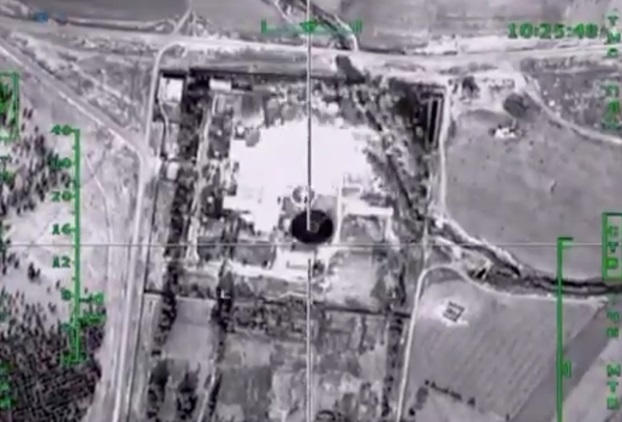 Last week, amid Russia’s bombing of infrastructure in northwest Syria, we reported on the destruction in Idlib Province of a bakery and well for drinking water serving at least 50,000 people.

Now, the combination of Russia’s Defense Ministry, the Syrian journalists, and the UN offer a sequel which testifies not only to the continuing assault but Moscow’s blatant deception over its campaign.

However, activists, journalists, and a UN official said the “oil refinery” in the video is the al-Khafsa water treatment plant, which was attacked on November 26.

Hanaa Singer, the UNICEF representative in Syria, issued a statement on Tuesday:

The bombing caused severe damage and cut off piped water supplies on which approximately 3.5 million people depend. Water pumping operations have since been partially restored, but more than 1.4 million people in rural Aleppo continue to suffer interruptions to their supply.

The al-Khafseh facility is one of the most important in Syria, producing an average of 18 million litres of drinking water daily. Drawing raw water from the Euphrates River, it is the sole source of drinking water for four million people across Aleppo Governorate.

Zain Halabi confirmed the damage in an interview with Syria Direct:

The water crisis before the airstrike was caused by electricity cuts. People would get potable water from the al-Khafsa station, but when the electricity was cut, they could not pump water to the upper floors of their apartment buildings. Increased fuel prices also contributed to the problem.

Now the water itself is actually cut, not just electricity. So even if some people could get a hold of scarce and expensive fuel to run their pumps, they can’t get any water.

Halabi said engineers from the Assad regime under the auspices of the Red Crescent, partially repaired the damage caused by its Russian ally@

[The Islamic State] possesses neither the expertise nor the materials to do it themselves….The regime had no choice but to in a way cooperate with IS — if they hadn’t, then water would not be delivered to regime-held areas in Aleppo city.

Halabi added that Russian airstrikes in and near Aleppo city have caused further damage to vital facilities, “such as bakeries, electricity stations, schools, grain storage facilities, and humanitarian aid trucks”, as well as killing dozens of civilians.