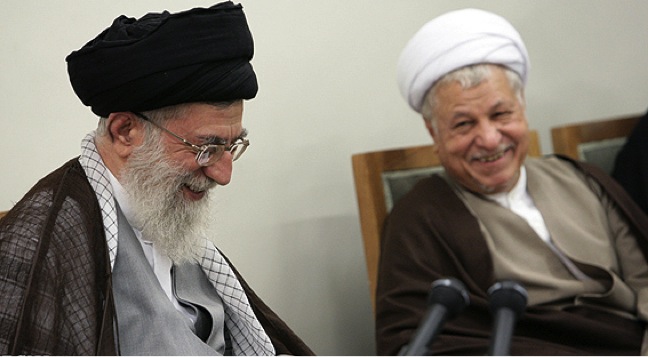 Rafsanjani, bitterly opposed by hardliners and under pressure for several years, used a newspaper to rattle the foundations of the Islamic Republic. He repeated his suggestion that the Supreme Leadership could pass to a council once the current Leader, Ayatollah Khamenei, died, and he asserted that the Assembly of Experts — the body which names and can nominally replace the Leader — can supervise institutions that fall under Khamenei’s authority.

Rafsanjani also signaled moves for a bloc of candidates for the Parliamentary and Assembly elections in February, challenging hardliners and conservatives. He welcomed the announcement by Hassan Khomeini, the grandson of the Islamic Republic’s founder Ayatollah Khamenei, of an entry into politics with candidate for a seat in the Assembly.

He then turned on his opponents:

Some in the parliament use the platform to propagate extremism. Some of the country’s institutions help them, more or less. Islamic Republic of Iran Broadcasting also broadcasts them, which encourages them….The extremists in Iran make statements and most [threats] are not acted upon.

The former President has long suggested changes in the Iranian system to redistribute power. In summer 2009, he was effectively ostracized by other elements of the regime after a Tehran Friday Prayer in which he supported the right to protest, amid mass demonstrations followed disputed Presidential elections. He was stripped of the prayer leader’s role, and he lost his chairmanship of the Assembly of Experts in 2011. Two years later, he was blocked by the Guardian Council from running for President.

However, Rafsanjani has had a political resurrection after the surprise victory of his ally Hassan Rouhani in the subsequent election. He has used the space to defy pressure on his family, even challenging the Supreme Leader. Earlier this month, he confirmed that he will stand for chairmanship of the Assembly in February.

He renewed the call for major change in his interview:

The head of judiciary, Sadegh Larijani — who has been publicly battling with President Rouhani over the forthcoming elections — immediately hit back:

Sometimes the media spread statements that are incorrect. They include baseless statements about the Assembly of Experts’ supervision over the supreme leadership and institutions that fall under his [authority]

In the constitution, there is no such supervision over the Supreme Leader.