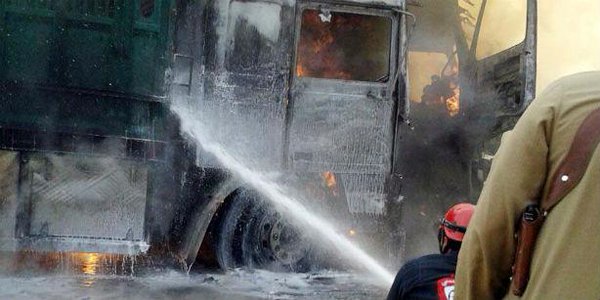 UPDATE 1720 GMT: Russia’s Defense Ministry has disseminated photos of the advanced S-400 anti-aircraft missile systems which have been deployed at the Russian airbase in Latakia Province in western Syria:

The Ministry announced the placement of the systems, whose missiles can reach Turkey and Israel, on Wednesday.

UPDATE 1700 GMT: Russia’s Defense Ministry has denied that its warplanes hit the Turkish aid trucks near the Syrian border town of Azaz, saying the information is being presented without context:

The reports appearing in the foreign media are stovepiping, about the alleged destruction of a humanitarian convoy of trucks from Turkey by Russian planes near the Bab al-Salama crossing. Ultimately, there are no remains of any munitions. Therefore we recommend that the next time a truck convoy with munitions for militants operating in northern Aleppo catches fire, it isn’t passed off as humanitarian aid.

The spokesman added that Turkey had not given any information about any aid convoy passing through that area.

Putin introduced the meeting by saying he would “unite forces in the fight against a common evil”. 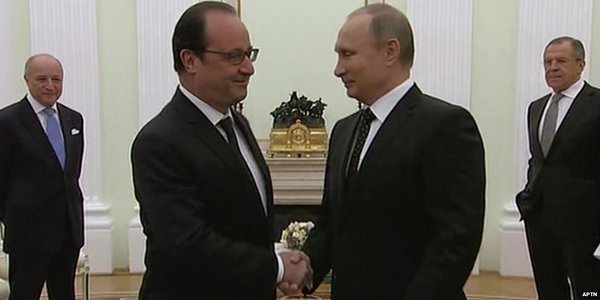 Erdoğan replied to a comment by Russian President Vladimir Putin that Moscow is still awaiting an apology or an offer of reimbursement for damages.

“It seems that the Turkish leadership is deliberately driving relations (between Russia and Turkey) into a dead end,” Putin said at a ceremony in the Kremlin.

I think if there is a party that needs to apologize, it is not us. Those who violated our airspace are the ones who need to apologize. Our pilots and our armed forces, they simply fulfilled their duties, which consisted of responding to…violations of the rules of engagement. I think this is the essence.

Erdoğan said that he had phoned Putin following the shootdown of the Su-24 jet but that the Russian leader did not answer.

UPDATE 1300 GMT: Russia is continuing its aerial assault on Syrian border crossings with Turkey and nearby infrastructure — this footage is from the Bab al-Hawa post:

There has also been bombing throughout Aleppo Province, including near Aleppo city and on the foreign-led regime offensive’s frontline with rebels to the south near Khan Touman.

There are also reports of attacks on opposition-held Idlib Province, including on a car market in Saraqeb and a school in Maarat Num’an.

Russians Targeted a school and civilian homes in Mart Numan City about an hour ago, 4 martyrs and tens of wounded pic.twitter.com/CX9Drd0c8P

ORIGINAL ENTRY: Following the downing of one of its warplanes, Russia hit back at Turkey on Wednesday with the bombing of Turkish aid trucks in northwest Syria.

The trucks were set ablaze in opposition-held northwestern Aleppo Province, near Azaz and the Bab al-Salama crossing. At least seven people were killed and 10 injured.

Turkey’s Anadolu News Agency said about 20 trucks with cement and iron were hit.

Footage of the attacks:

Russia also renewed its aerial attacks in support of the Syrian military’s offensive in northern Latakia Province, including strikes in the Jabal Akrad mountains.

Moscow also bombed between the Turkish border and Aleppo city, with attacks between Tel Rifaat and Hreitan.

Russian media featured the testimony of the surviving navigator of the aircraft, who denied that it had entered Turkish airspace and said that, before the Su-24 was struck, “There were no warnings at all. Neither over the radio traffic or visually.”

However, before and after the navigator’s statement, the Turkish military posted the audio of warnings, in English, which it said had been given 10 times in five minutes to two Su-24s. The final message was “Change your heading south immediately”:

Turkish officials also said that they did not know whether the warplane was Russian or Syrian when the warnings were given.

The line from Moscow’s officials and media has shifted several times over the past two days. President Putin initially said there had been no violation, with the Su-24 hit four km (2.5 miles) inside Syria. However, later on Tuesday, Russian reports constructed a reason for the entry into Turkish airspace, saying that the warplanes have to adjust their flight path because of winds from the south and that the Turks have known of this since Russia began bombing on September 30.

Russian Foreign Minister Sergei Lavrov maintained pressure on Turkey but accusing Ankara of a “deliberate and pre-planned” attack on the Su-24 with “a very definite purpose”. He complained that, while he “heard condolences” from Turkish counterpart Mevlut Cavusoglu in a phone conversation, “all the other statements were aimed at justifying the Turkish position”.

The Foreign Minister stepped back from confrontation but said Moscow will “seriously reassess and revise all that happens…in our relations” with the Turks. He balanced warnings, including from Prime Minister Dmitri Medvedev, that Russia could restrict economic links with Turkey:

Russian Prime Minister Dmitri Medvedev warned on Wednesday that important joint projects could be cancelled and that Turkish firms could lose market share in Russia.

“The killing of a Russian pilot by terrorist groups backed by Turkey is clearly a war crime,” Moallem said after a meeting with Lavrov. “Turkey is supporting terrorist groups operating in Syria against the legitimate government of Damascus.”

Reinforcing an earlier warning by Lavrov that Russians should not travel to Turkey, President Putin said on Wednesday, “After yesterday’s event, we cannot rule out other incidents and if they happen, we will have to respond somehow. Our citizens in Turkey could, certainly, be in serious danger.”

The President spoke as about 500 Russian protesters attacked the Turkish Embassy in Moscow.

President Rouhani has called on Moscow and Ankara to ease tensions, after Tuesday’s downing of a Russian warplane by Turkey’s jets on the Turkish-Syrian border:

Russia and Turkey are both neighbors and friends of Iran. It is very important to us that the relations between our neighbors are cordial. We are not at all content for there to be disputes between our neighbors or for disputes to be created in their relationship; it is in the interest of neither us nor the region. We urge these countries to take precautions to prevent the recurrence of these types of incidents….These types of incidents are in the terrorists’ interest.

At the same time, Rouhani maintained Iran’s alliance with the Russian military intervention in support of the Assad regime:

The Russians are battling with the terrorists, and Iran, from the start of the Revolution throughout recent decades and years, has fought with the terrorists. [Iran] has always helped any country that has been the target of terrorist attacks.

The attack followed the raising of the Syrian revolution’s flag above a school and ISIS’s arrest of its head of religious police in the town on the Iraqi border.

Activists claim that the Islamic State responded by burning the flag and initiating a new wave of arrests and executions, acting “maybe in an even more severe fashion than before”.

Reports have circulated for months of gunmen killing ISIS fighters, but opposition activist Badar Al-Khalaf said, “This time, it was groups openly defying the Islamic State rather than assassination attempts with silent weapons.”