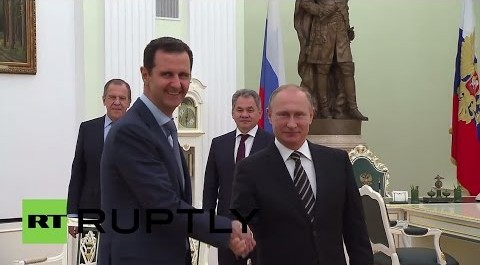 Russia’s Foreign Ministry has said that Moscow is not insisting on Syria’s President Assad remaining in power.

Asked on Tuesday if saving Assad was a matter of principle for Russia, spokeswoman Maria Zakharova said, “Absolutely not, we never said that.”

She repeated, “We are not saying that Assad should leave or stay.”

Zakharova said on a Moscow radio station that whether Mr Assad stayed or stepped down was not critical for Russia, but that it was up to the Syrian people to decide his fate.

Itar TASS offers a different version of Zahharova’s interview on a Moscow radio station, with no mention of the exchange about “saving” Assad.

Instead, the emphasis is on Western distortion, with the spokeswoman saying, “Fresh attempts have been made by Western media to present things in a way that Russia allegedly changed its stance on the future of [Assad].” Itar TASS continued:

According to Zakharova, Moscow has never said whether it supports or does not support President al-Assad. “The Russian side has pursued a clear line that the Syrian people should decide the future of the president of a sovereign Syria,” the Russian diplomat said.

“It is fundamentally important for us to preserve the Syrian statehood. All these basic principles have remained unchanged. They are fixed in the Geneva communique; the United Nations Security Council documents and the Vienna statement of the Contact Group for Syria adopted on October 30.

“We are going to curb any attempts by Western media to distort the Russian approach to the Syrian settlement by juggling with quotations.”

The head of Iran’s Revolutionary Guards, General Mohammad Ali Jafari had pointed on Monday to a growing divide between Tehran and Russia over Assad’s future.

Jafari said the Islamic Republic must continue backing Assad because “after him, we do not have anyone to fill that hole”. However, he said, “It is possible…that [Russia] is not looking for Assad to remain.”

Earlier on Tuesday, Russia’s Foreign Ministry said it was hoping to convene a meeting between members of the Assad regime and nominal opposition figures in Moscow next week.