Iran Feature: Supreme Leader — US is a “Den of Espionage” Conspiring Against Us 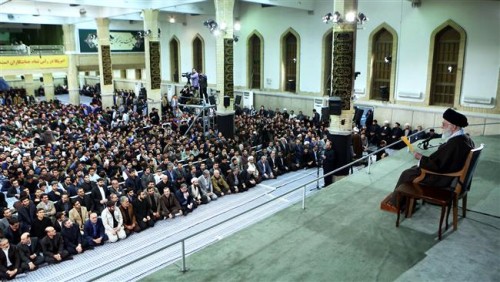 In the latest of his repeated condemnations of the US, Iran’s Supreme Leader has commanded Iranian students to learn about America as a “den of espionage”.

Despite conditional endorsement of the July 14 nuclear deal, Ayatollah Khamenei has used a series of speeches to reject any further negotiations with the US. He has said that Washington is looking to undermine the Islamic Republic, feeding the warnings of “sedition” amid in-fighting within the Iranian regime.

Ahead of Wednesday’s anniversary of the 1979 takeover of the US Embassy, Khamenei said the episode showed “the Americans, at the height of the [revolutionary] movement and the victory of the Revolution, were conspiring against the Islamic Republic — that is what America is”.

US Den of Espionage docs show at the climax of Revolutionary movement& victory, the US was constantly plotting against the Islamic Republic.

The Supreme Leader then linked the Embassy occupation, in which 52 US hostages were held for 444 days, to current events:

In the [nuclear] negotiations, claiming that they opposed war, Americans even shed tears in front of cameras. This is the very person who doesn’t bother when Zionists cut to pieces hundreds of children in Gaza. Is crying in front of the camera a sincere act?….

The slogan “Death to America” is backed by reason and wisdom, and it goes without saying that the slogan does not mean death to the American nation. This slogan means death to the US’s policies, death to arrogance.

The Supreme Leader continued to back the nuclear agreement by saying that it showed the “power of the Iranian nation” to rise against hostile measures. Meanwhile — even as his rhetoric has supported hardline criticism of the Rouhani Government — he said, “One shouldn’t mistake the main enemy with secondary enemies and with friends with whom one has disagreements.”

On Monday, the head of the Revolutionary Guards, Mohammad Ali Jafari, warned of a foreign-backed “fourth sedition” and said that Government officials were assisting them with “trust [of] liberalism and the West”.